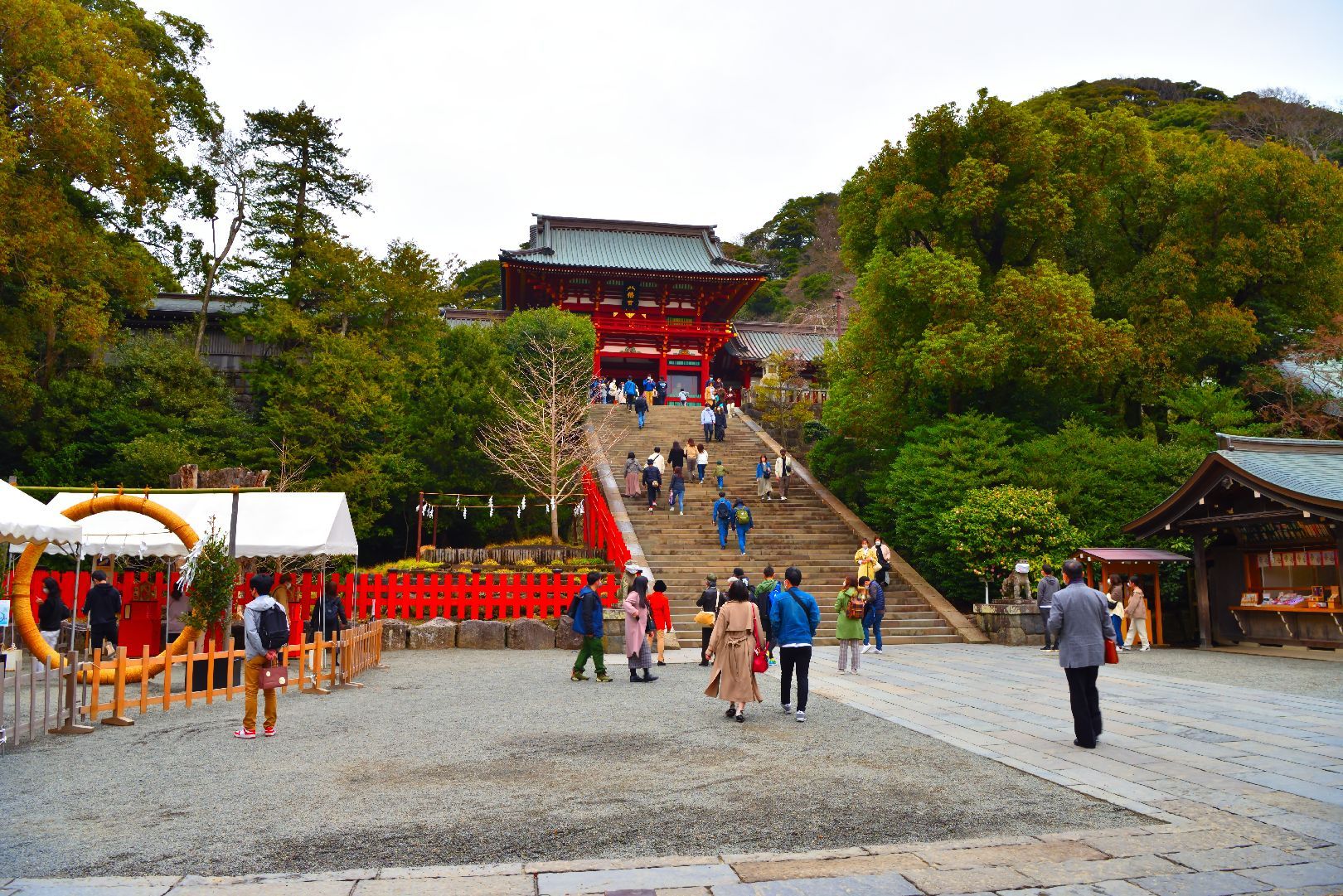 The article on Kamakura is also the 9th。Normally, I think Tsurugaoka Hachimangu will be introduced to the beginning.、It was so late to introduce me because it rained heavily on the first day and I skipped it.。

I expected a lot of congestion because it was before noon on the holiday of the year that is the stage of the taiga drama, but it was less than expected。Well, it wasn't free。 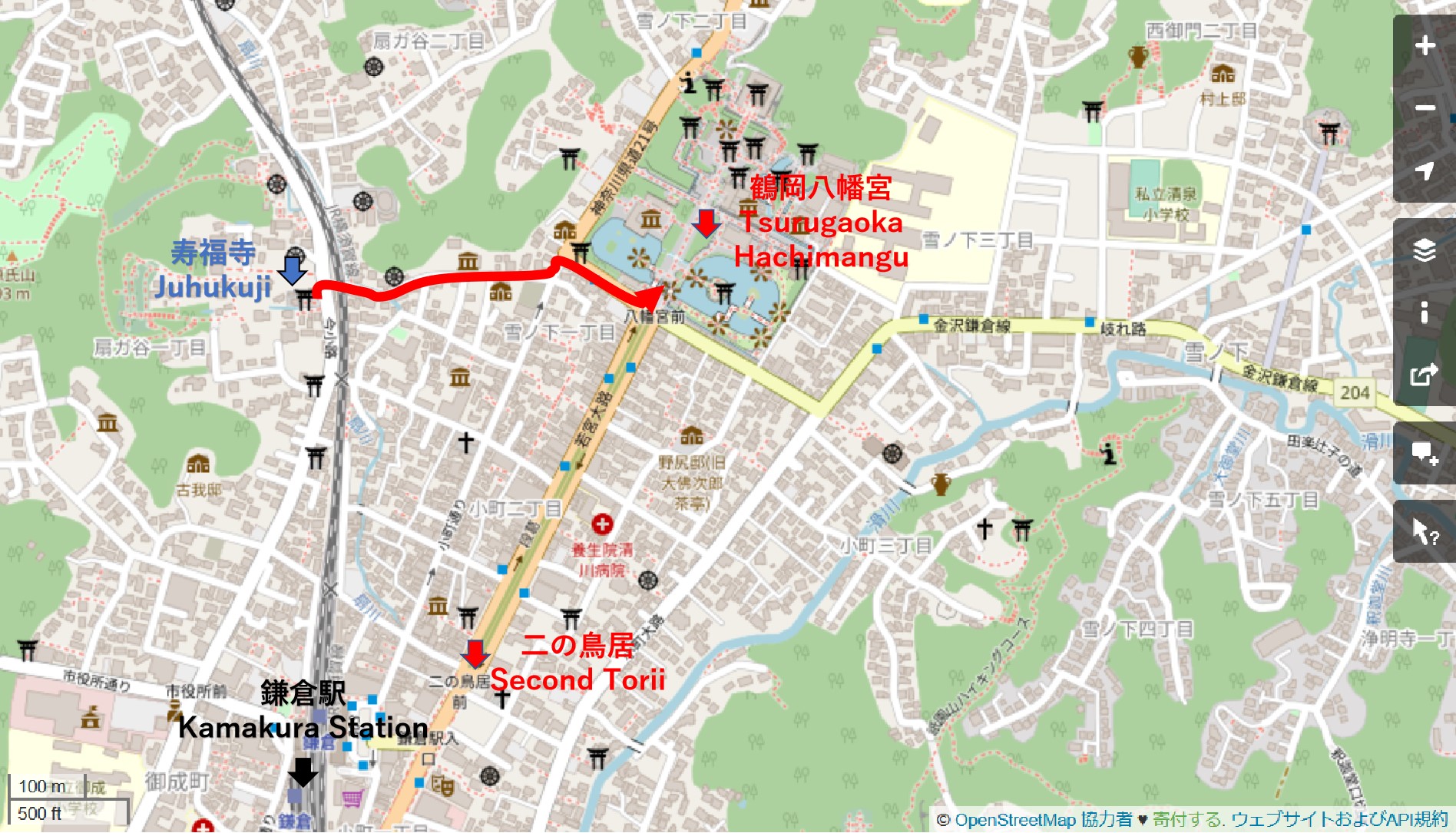 Cross the railroad crossing of the JR Yokosuka Line from Jufukuji Temple、After passing the Kawakita Movie Memorial Hall on your left, you will join Komachi Street.。If you turn left and then right immediately, you will see Tsurugaoka Hachimangu on your left.。

This route is a bit dull, so in this article, I will go down Wakamiya Oji, which is the approach to Tsurugaoka Hachimangu.、Let me introduce you from the second torii near Kamakura station.。 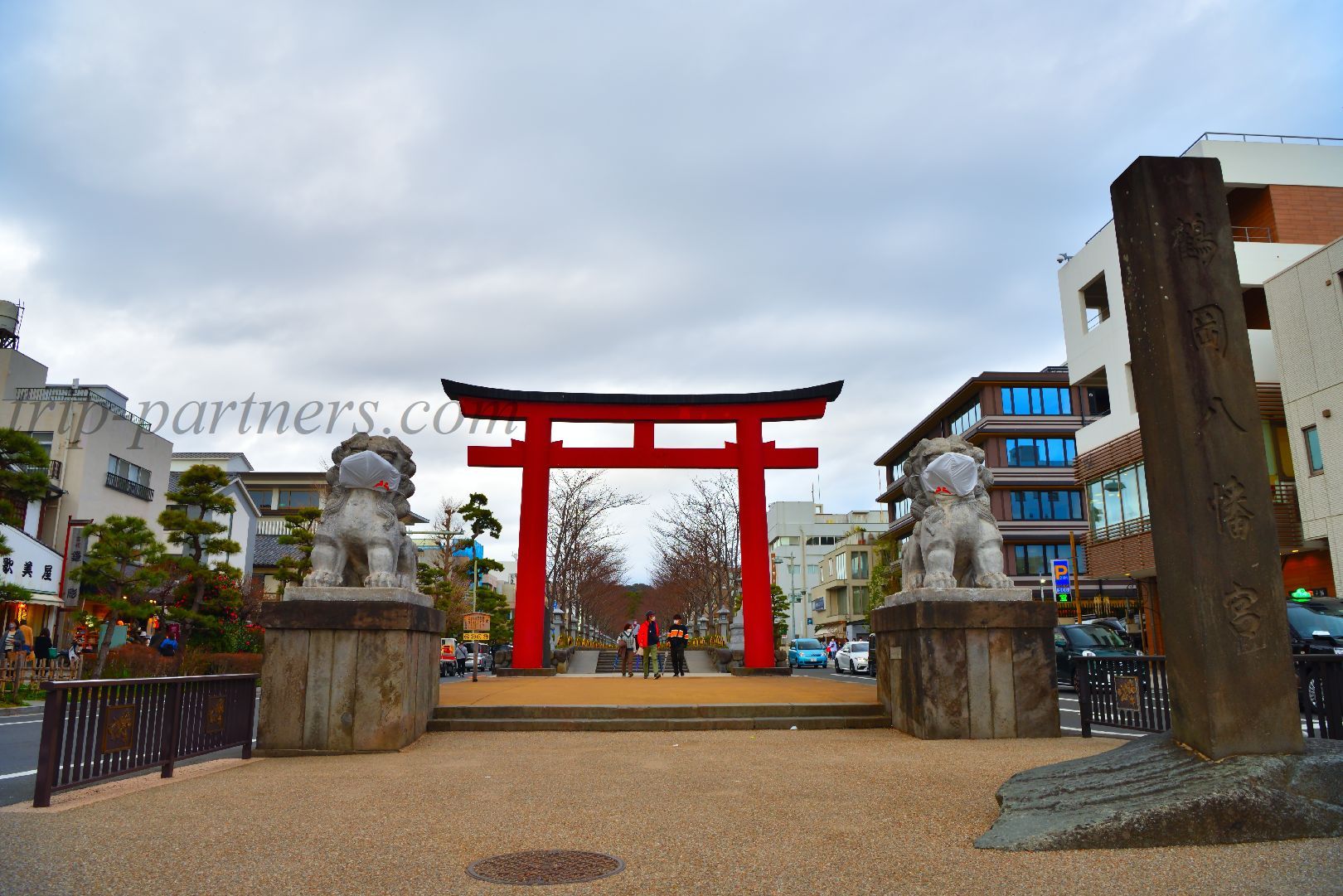 Exit Kamakura Station and go straight east、Turn left on Wakamiya Oji and you will see a large red torii gate.。The stone monument has a large character of Tsurugaoka Hachimangu。The guardian dog in the back is wearing a mask to prevent corona.。 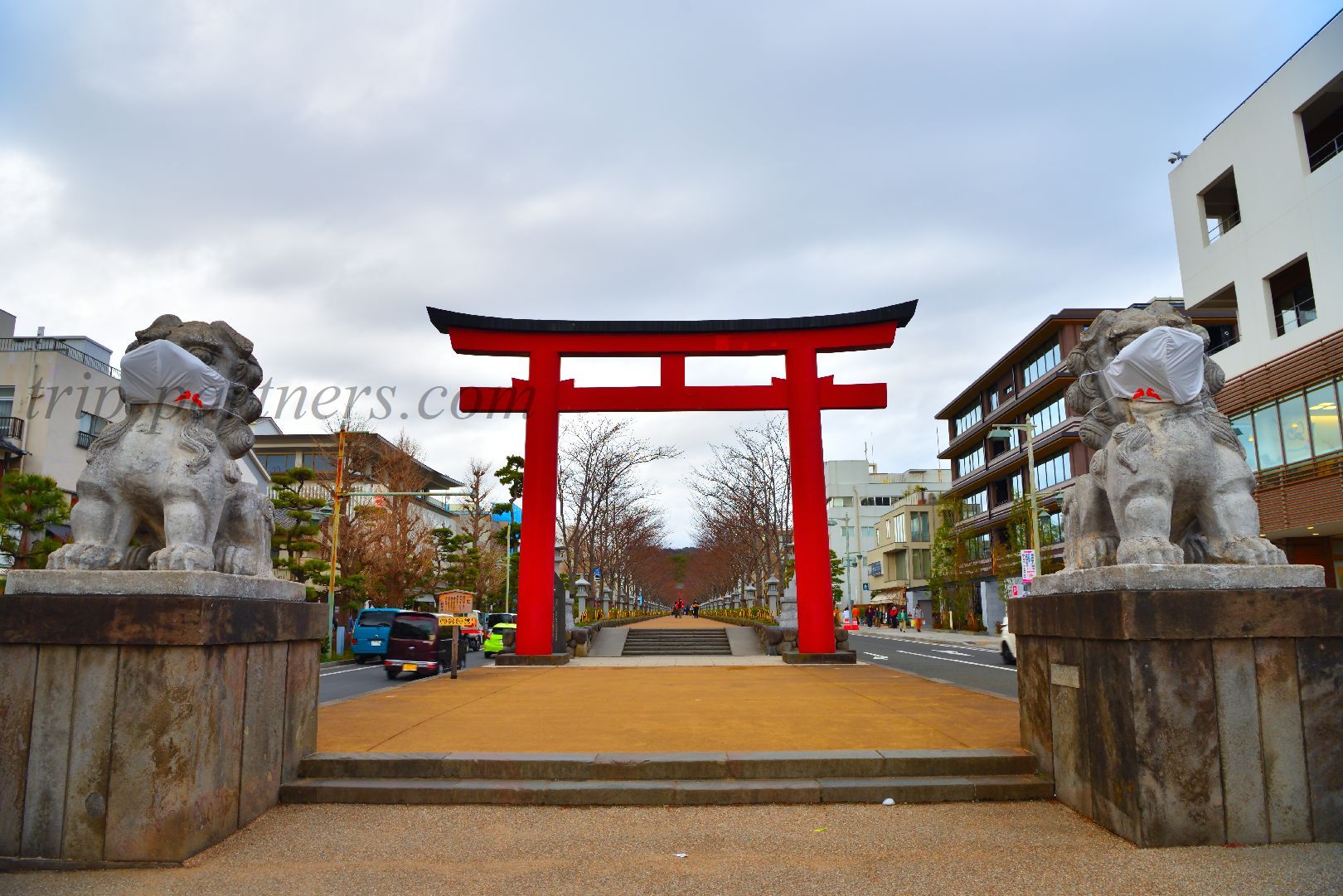 A tree-lined road continues behind the torii。It's dead now, but 1，It will be full of cherry blossoms in about two weeks.。I envy people who visit at that time.。I'm sorry I couldn't see it ... 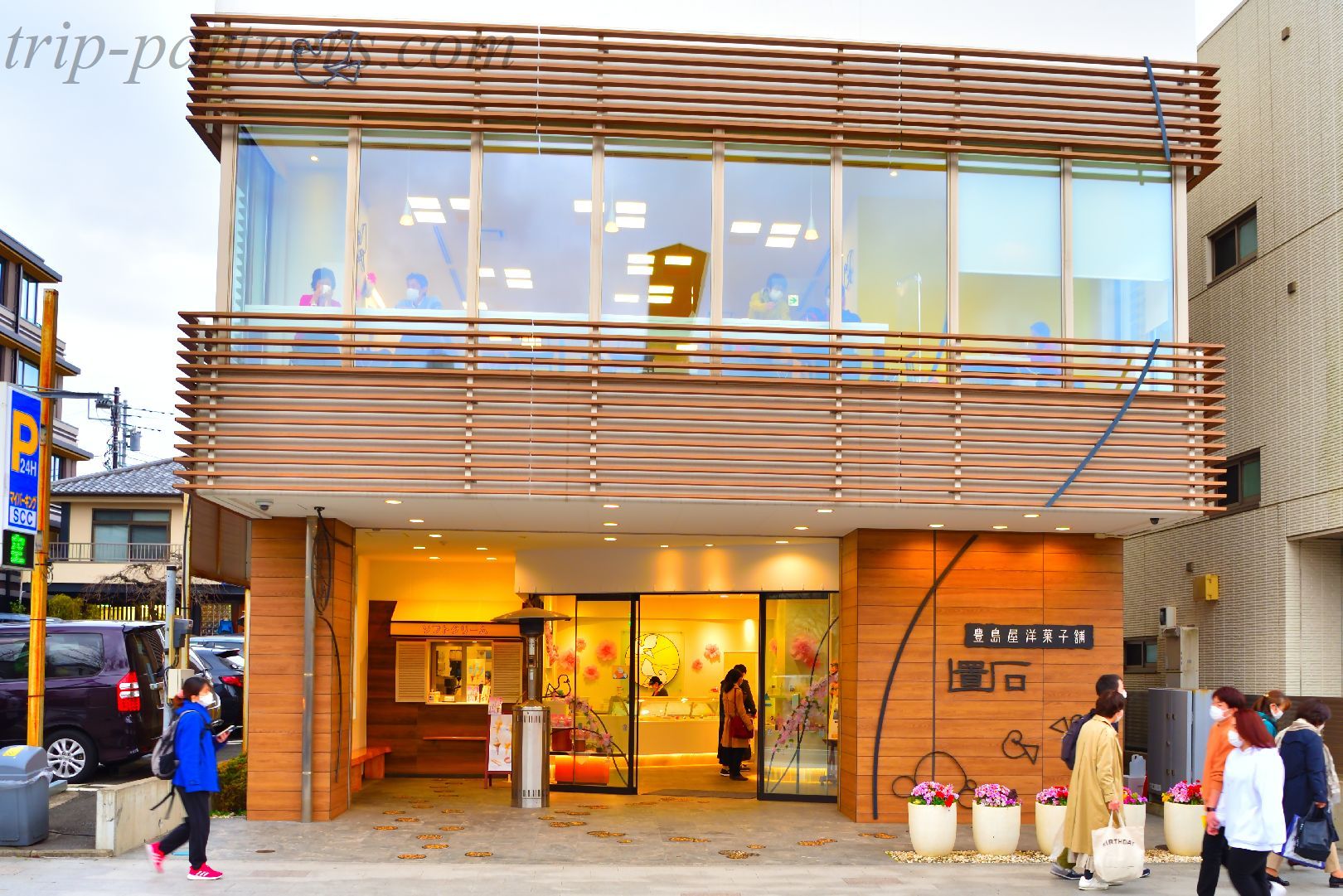 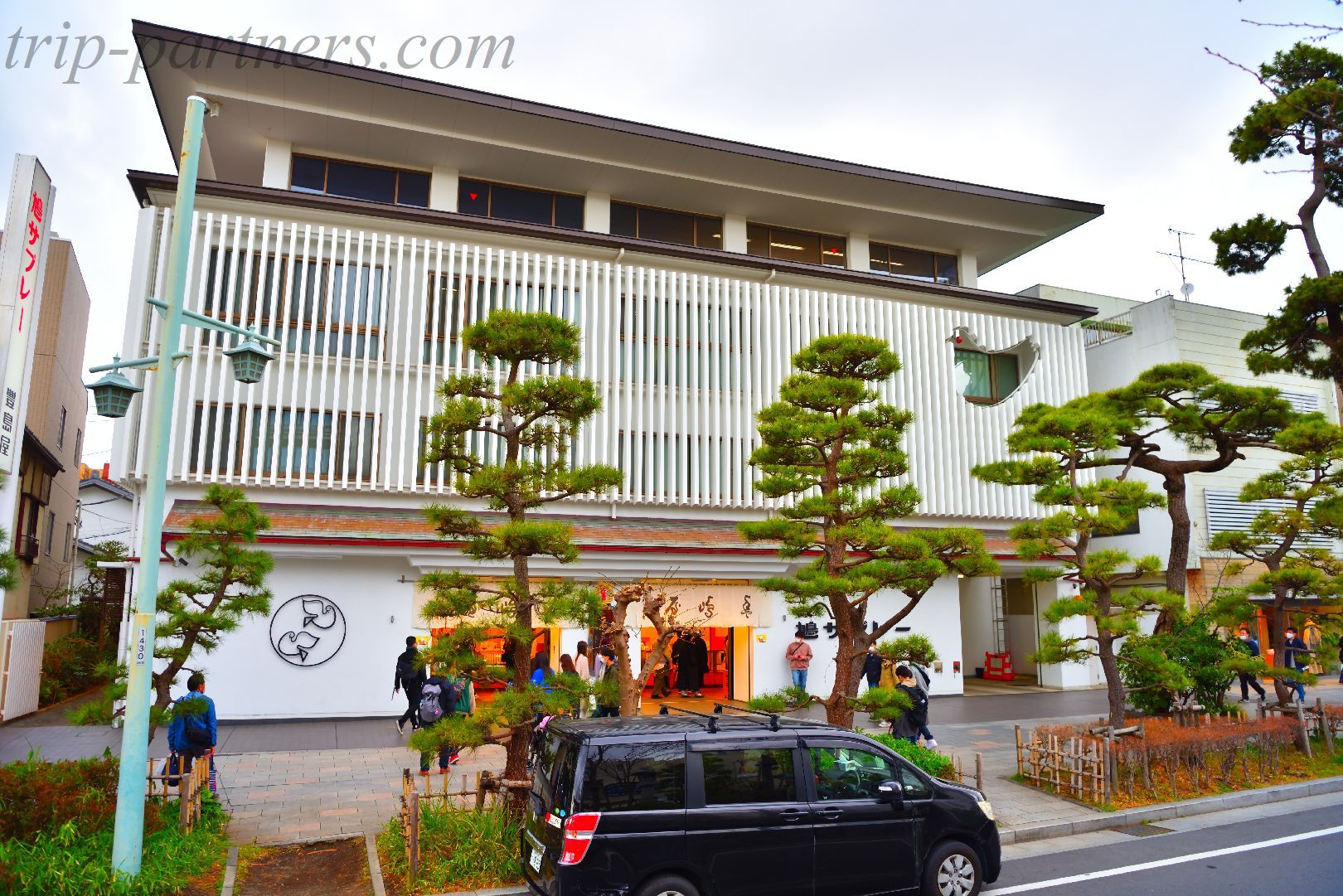 If you walk a little from there, you will see the Toyoshimaya main store on your left.。The number of customers is amazing。I wonder if it was so crowded when I visited a long time ago。Hato Sablés are famous all over the country, so you can buy them at department stores.、After all, many people buy it at the main store.。In the upper right corner of the building, there is also a design hollowed out in the shape of a pigeon of Hato Sablés.。The pine tree in front of the store also has an atmosphere。 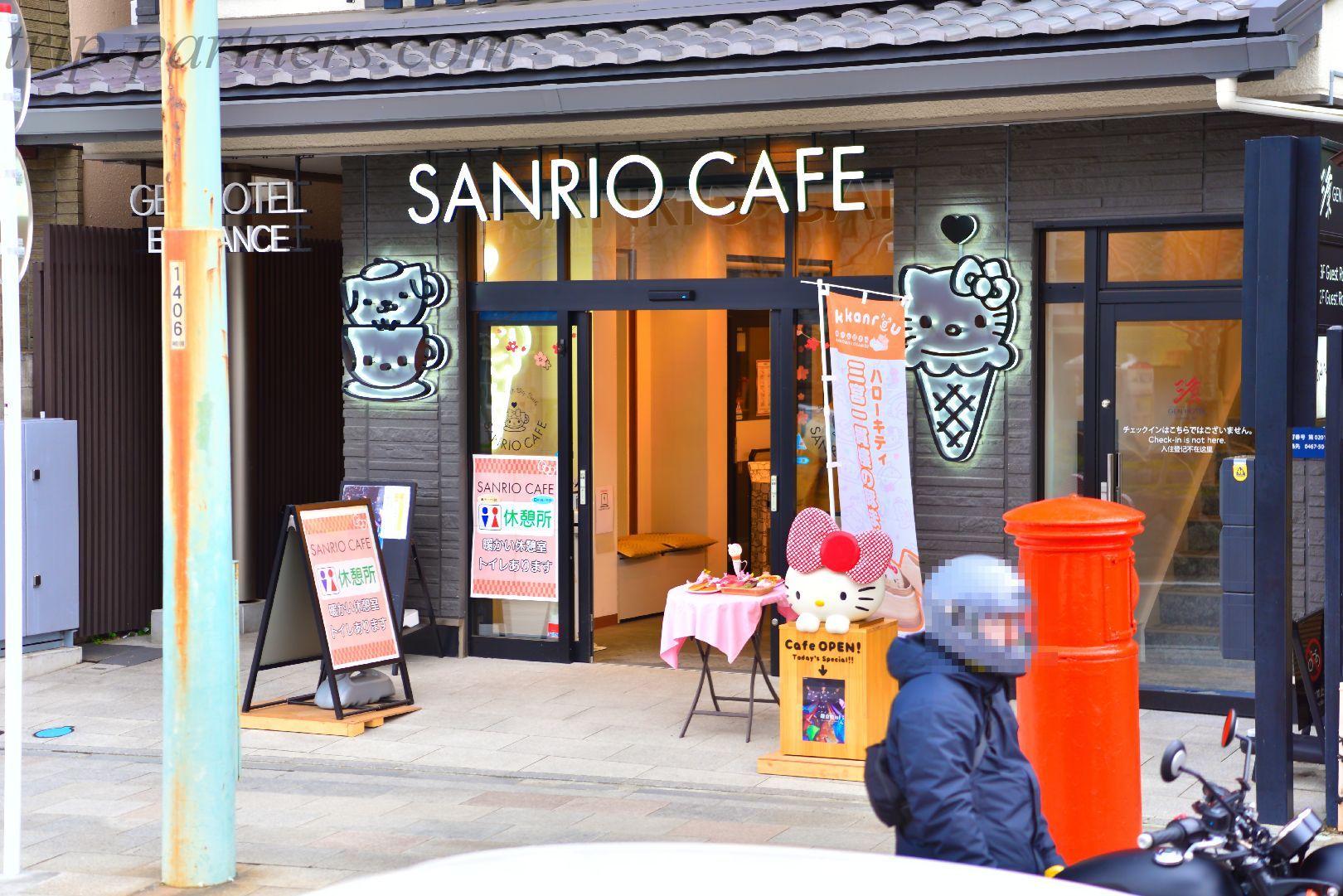 Just before the torii gate of Tsurugaoka Hachimangu San, I saw something interesting on the left side.。Cute Kitty is a cute Sanrio cafe。Pompompurin is also designed and taken。I wanted to stop by if I had time。

To the precincts of Tsurugaoka Hachimangu 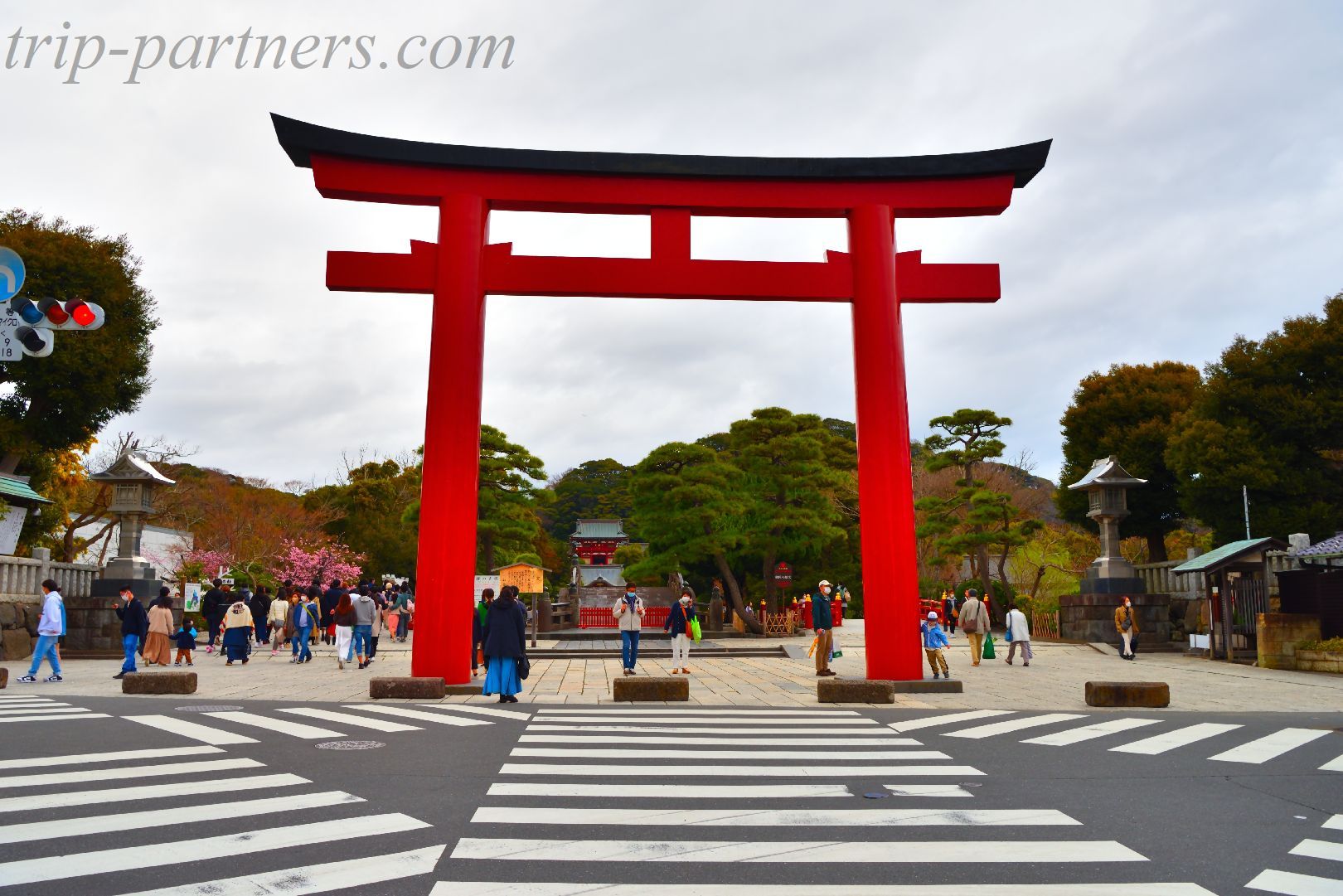 Finally arrived at Tsurugaoka Hachimangu Sanno Torii。It's a pity that the sky is cloudy。Early-blooming cherry blossoms are blooming pink flowers on the left side of the photo.。 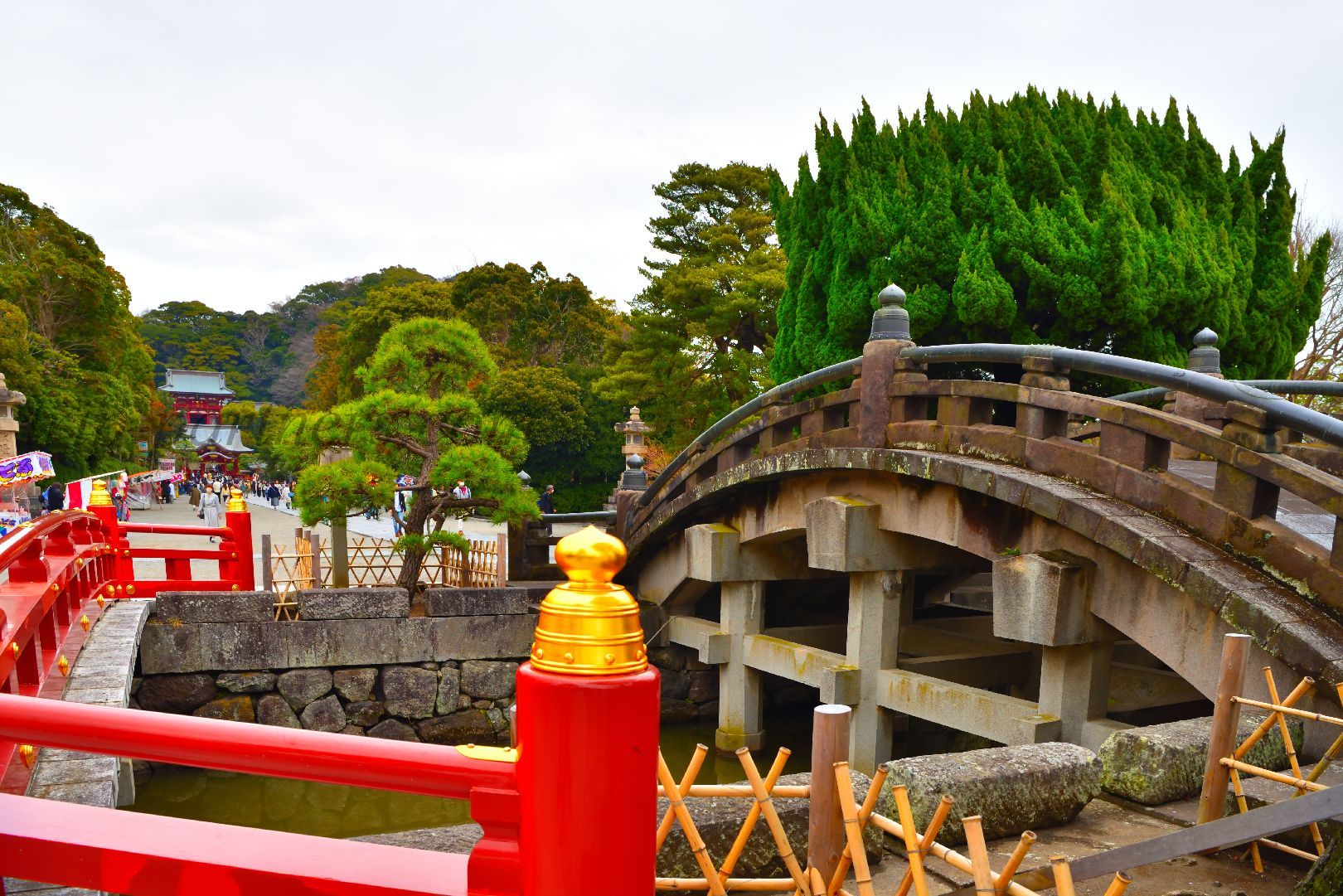 Tsurugaoka Hachimangu Shrine's famous Taiko Bridge。Unfortunately I can't cross。There are a lot of people, but not as much as I expected。The cherry blossom season is going to be amazing, though.。

On the left side of the approach leading to the main shrine, there was a taiga drama hall commemorating the 13 people of Kamakura.。For a limited time, those who are interested should go by the end of 2022.。 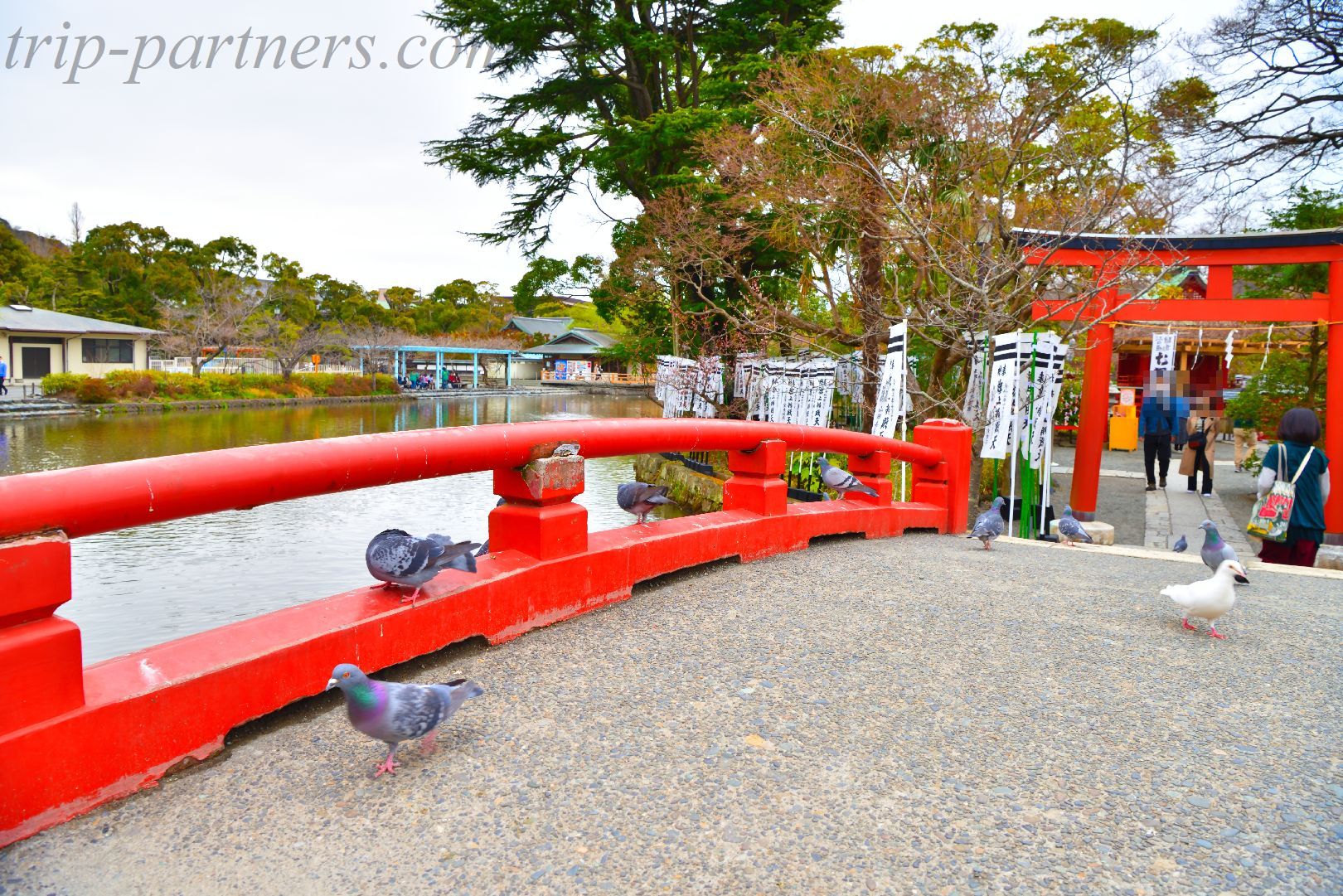 Go right after passing through the three torii gates and you will reach the vermilion bridge over Hataage Benzaitensha.。There were just a lot of pigeons and ducks。by the wayKotoku-in Temple of the Great Buddha of KamakuraThere was also a pigeon。Oh? Only one bird is mixed in different colors。 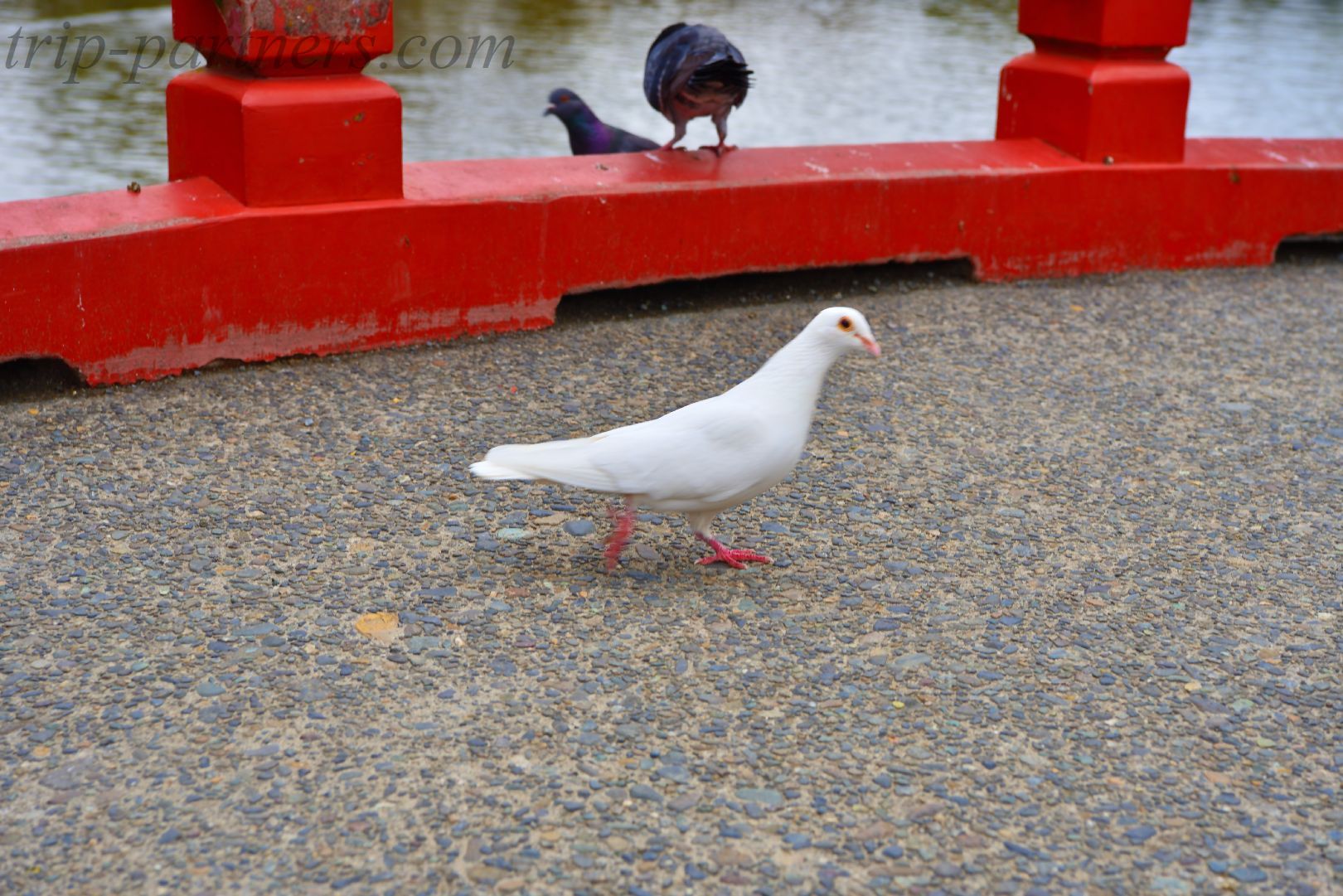 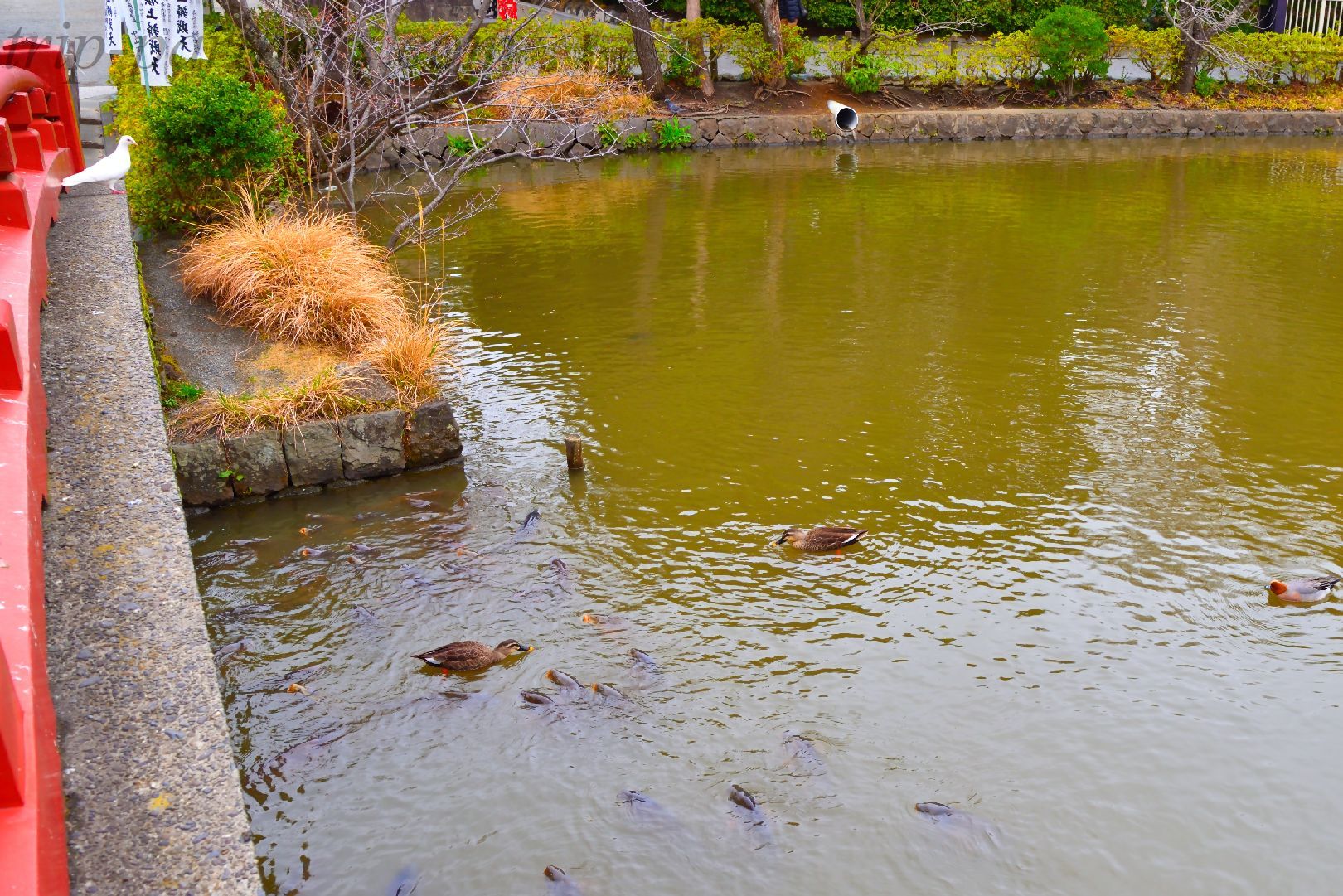 If you think you have moved to the edge of the bridge, there are many ducks in the pond! 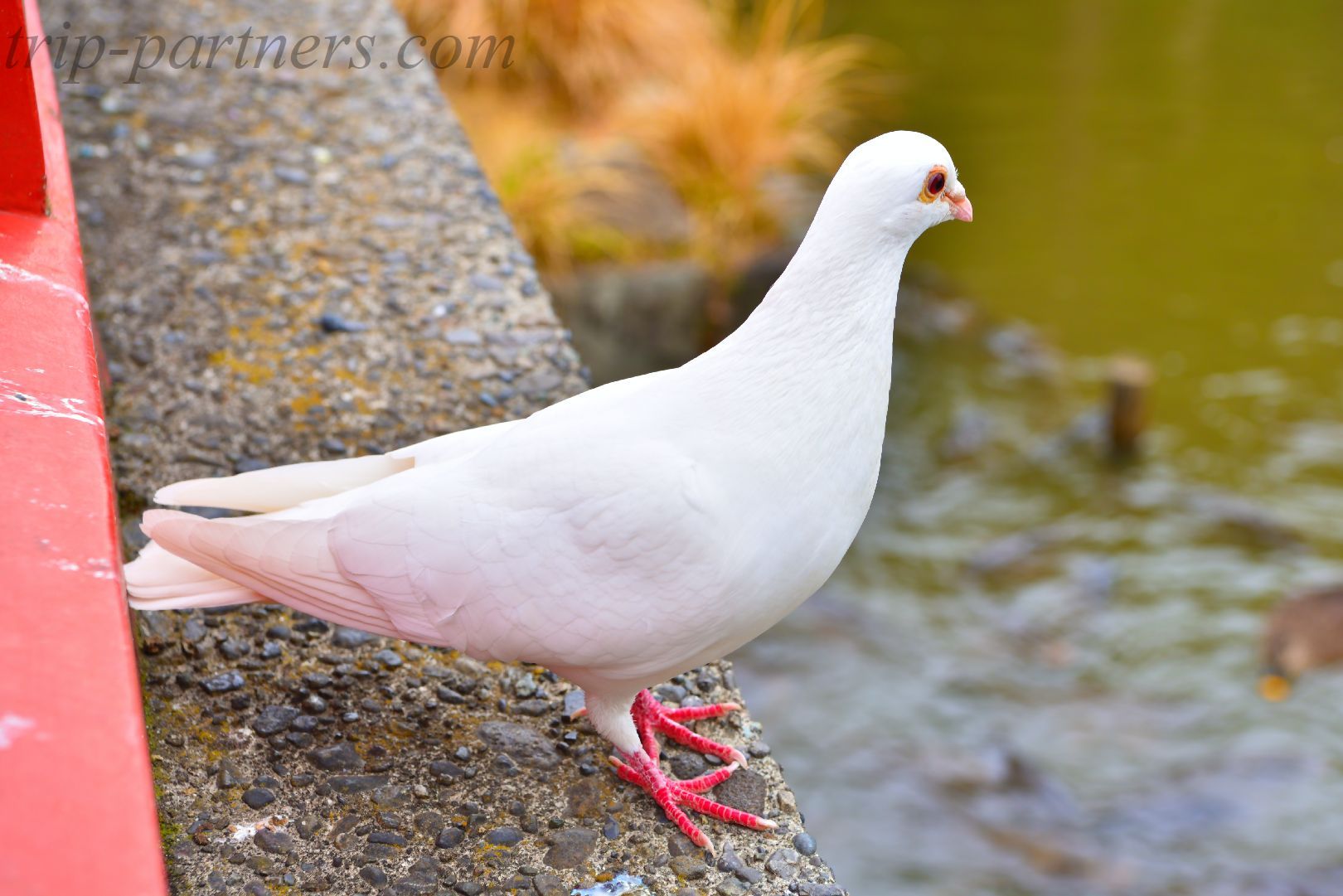 Even so, the white appearance is dignified! It may be the guardian deity of this shrine。 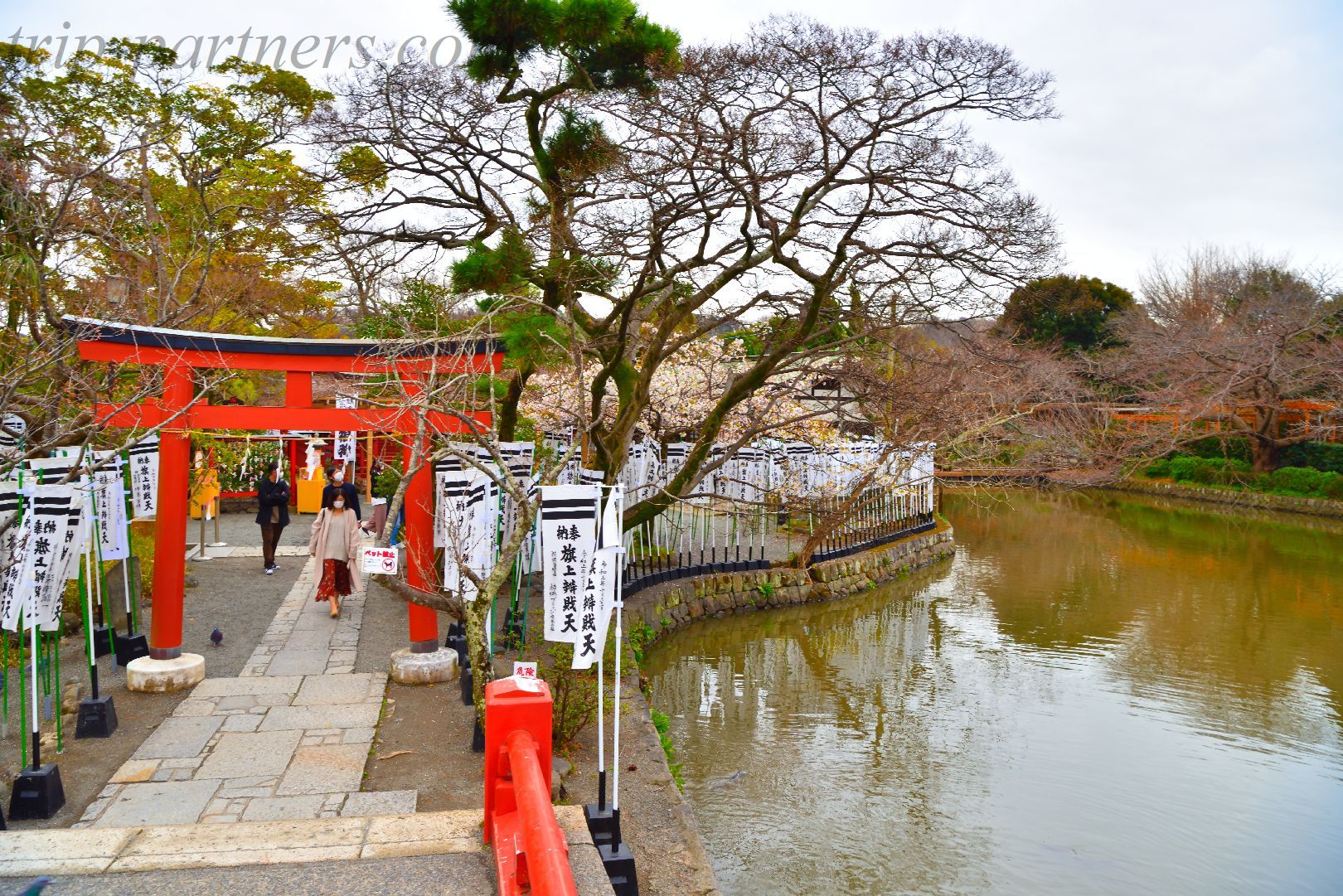 I was distracted by the pigeon。so、This is Hataage Benzaitensha。You can get the red stamp at the office located just past the torii gate.。This was also a bookkeeping one。It should be noted、The red stamp here is different from that of the main shrine of Tsurugaoka Hachimangu.。 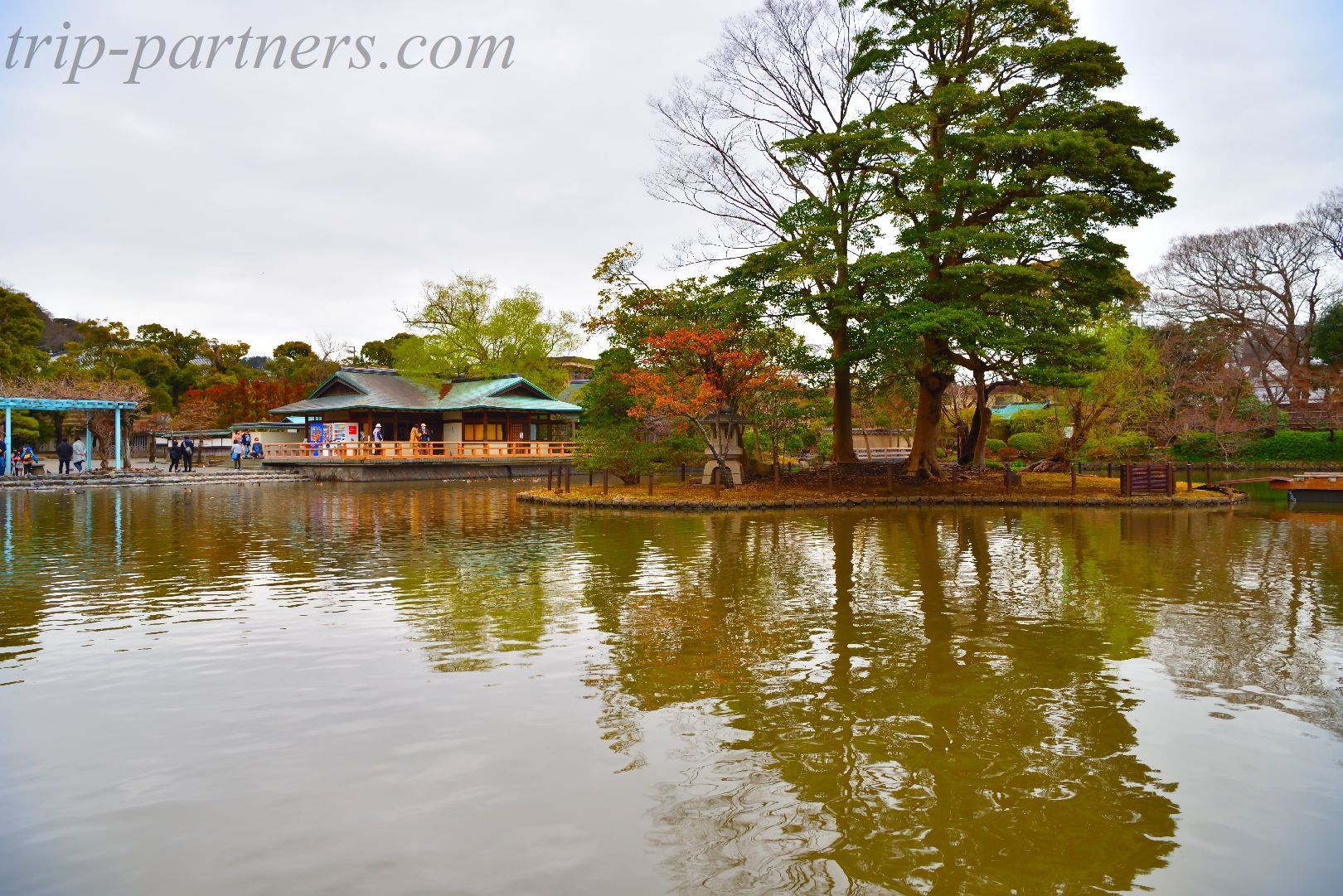 Genji Pond seen from Hataage Benzaitensha。Beauty。Also, behind the shrine, there was a stone that was said to have seated Masako Hojo, the regular room of Minamoto no Yoritomo.。It's just a stone、The appearance of the people who made a line to see the stone and took pictures was surreal.。

To the main shrine of Tsurugaoka Hachimangu 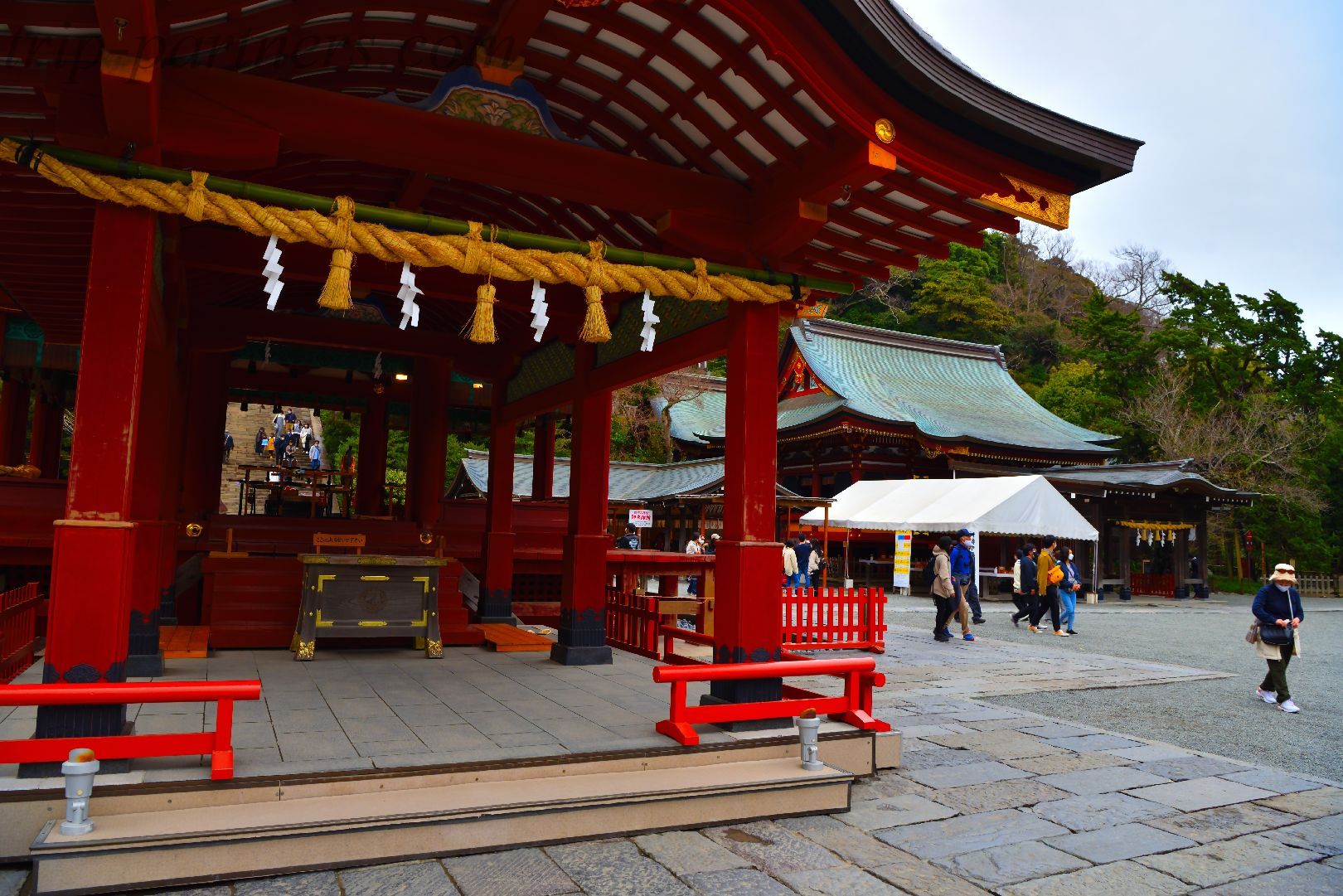 Tsurugaoka Hachimangu is the grand stairway here。First of all, let's introduce mainly the Kita-Kamakura area where I started sightseeing.、There are not so many people。There was a looping beside that。 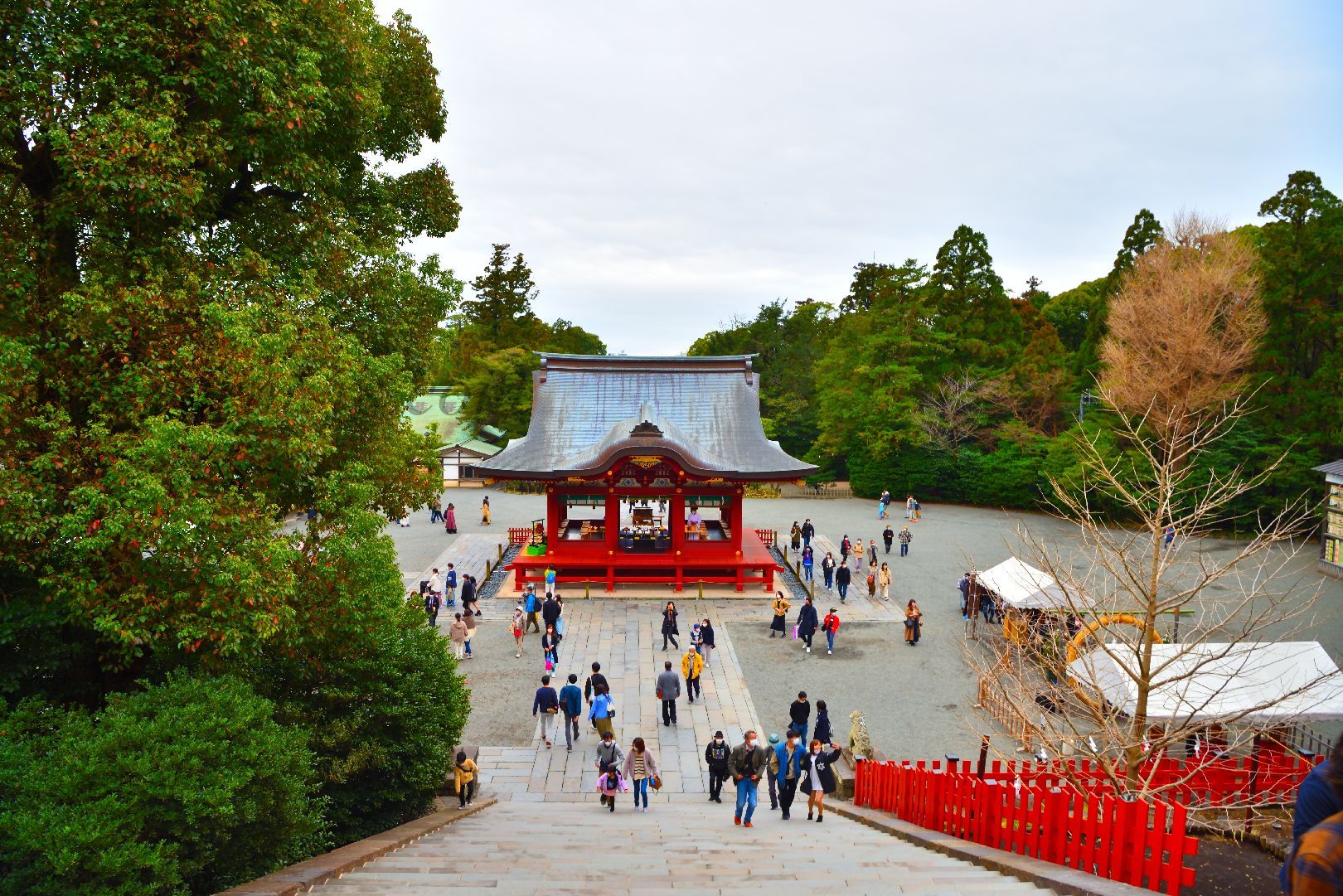 I refrained from shooting because there were too many people in the main shrine.。Instead, here is a photo of the Maiden from the top of the grand stairway.。It's before noon on Saturday, but there is a line in the circle、Do you see that it's not so crowded?。It was supposed to be amazing before the offering of the main shrine!

Tsurugaoka Hachimangu has many attractions, but this is about it.。The site is large、There is also a national treasure hall、I think it will take a lot of time to go all around.。

Next time, from the grave of Minamoto Tomo to the grave of Hojo Yoshitoki、I will go around the tombs of Hiromoto Oe。