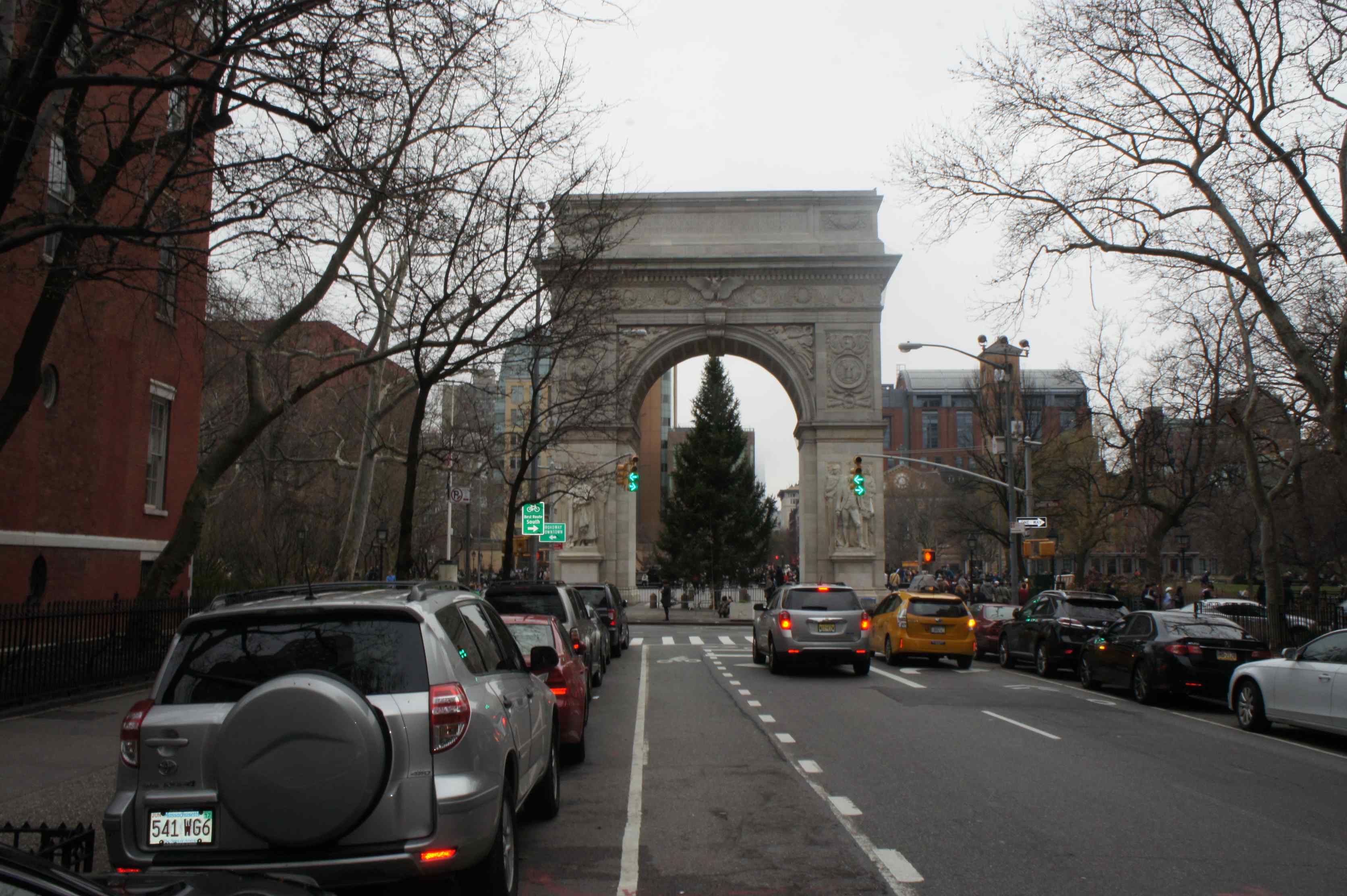 After the Empire State Building, head south on Fifth Avenue。When it comes to this area、Even on Fifth Avenue, there are no brand shops lined up、It's just a main street。If you go south on that street、Join Broadway。There is a Flatiron Building。 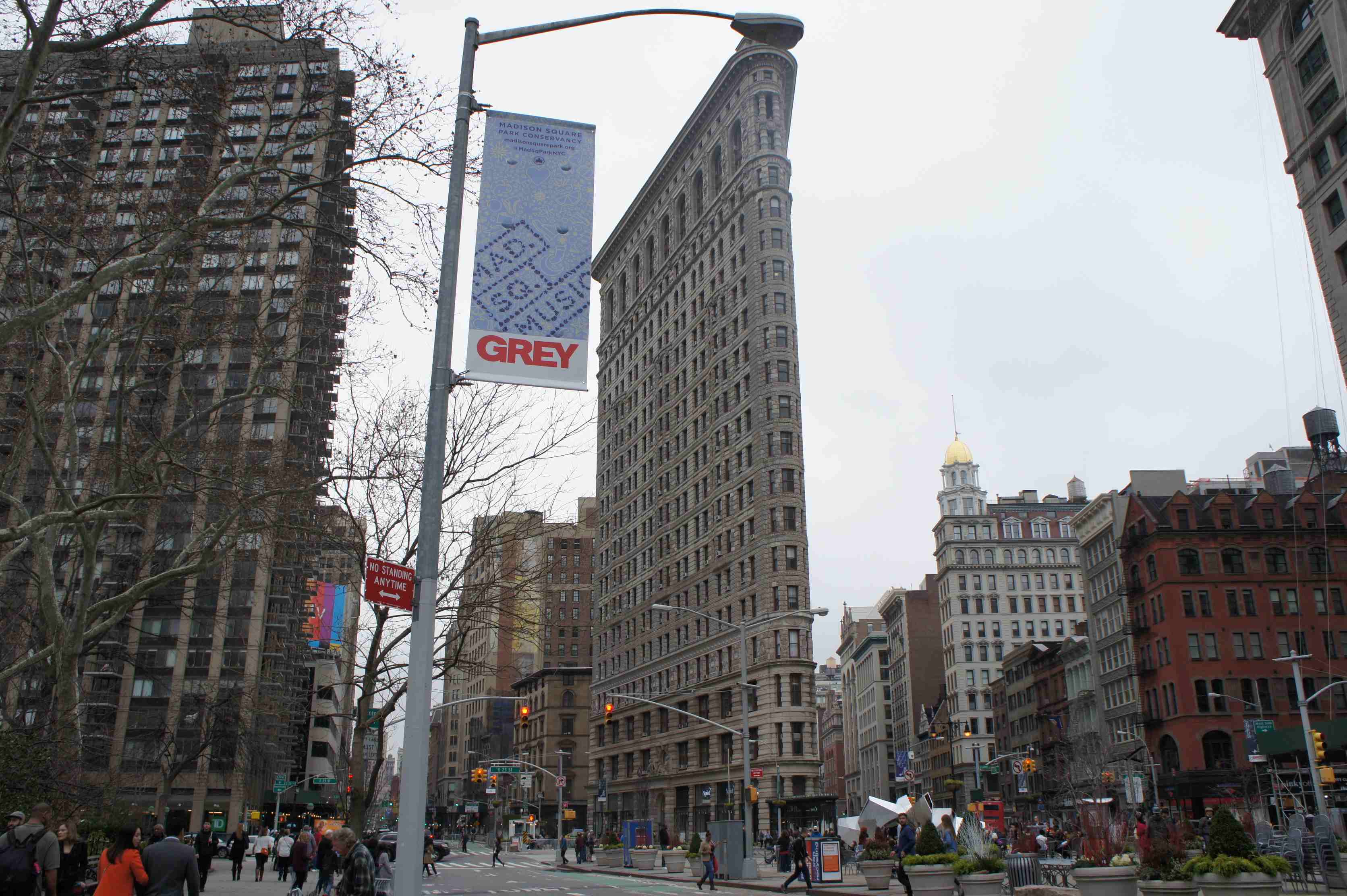 Since it is located at an intersection, it has a triangular site.。What is famous about this building、Often used as a location for movies such as Spider-Man and Godzilla、It's a must-visit spot for movie fans。It is said that it is difficult to shoot against the sun after noon.、Unfortunately it was cloudy and I was able to take pictures without worrying about that.。

You can enjoy wild squirrels in Madison Square Park here.(Lol)。By the way, if you go north on Broadway here, you can reach Times Square at the intersection with Seventh Avenue.。

And continue southward for tens of minutes、Finally the end of Fifth Avenue!

Cut through the park, go further south, turn left on Bloom Street and enter SOHO。This is not as big as Fifth Avenue, but it's a fairly high-class residential area with a lot of brand shops.。

Continue east and Broadway again。If you cut through that, Little Italy。There is nothing particularly remarkable and if you go straight ... 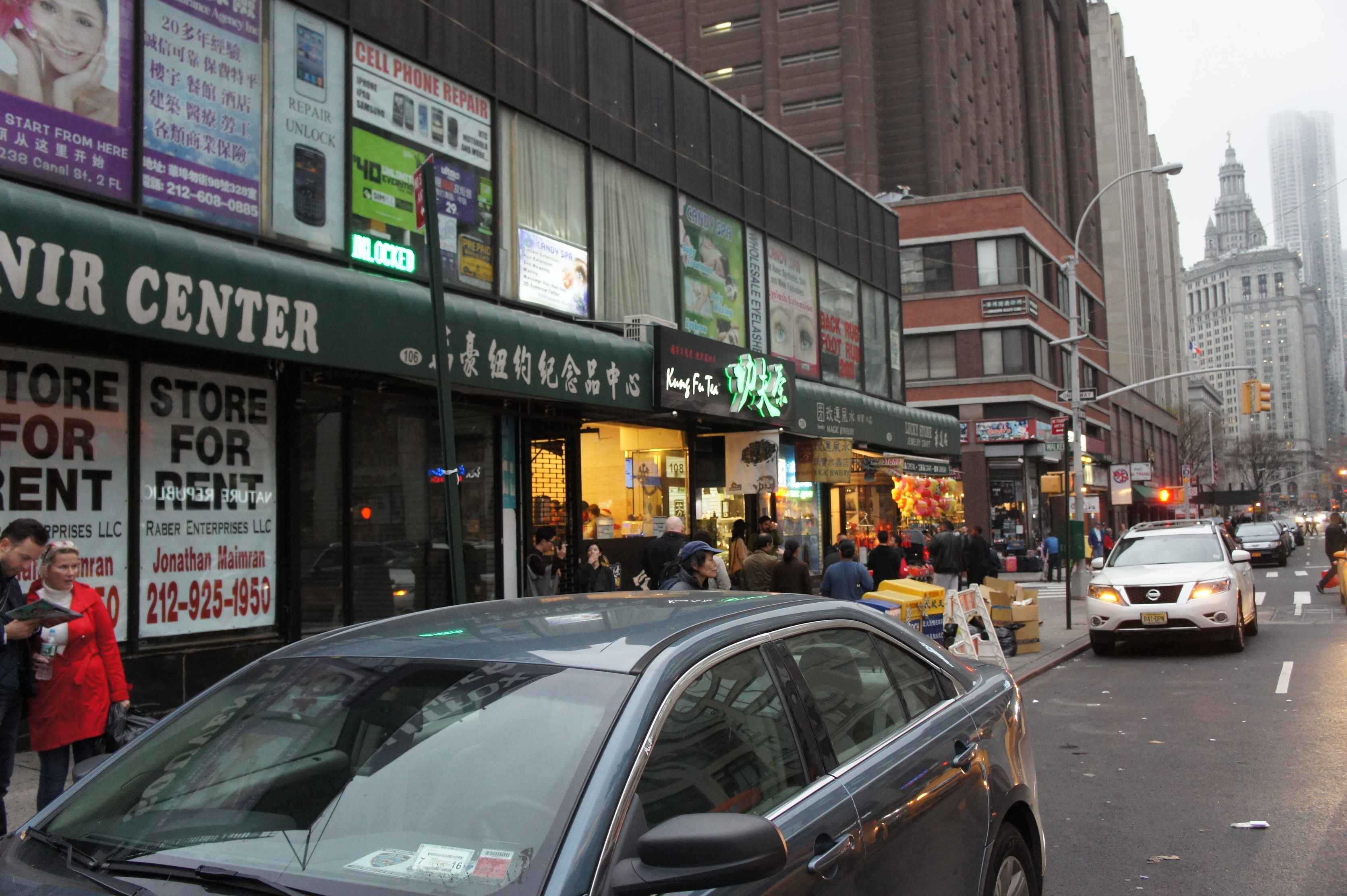 After a while, a light rain flutters around Manhattan City Hall.。I've been walking since the day before yesterday and I've been tired。I mean, I'm walking an odd distance。It ’s scary to think back。My mother is over 60, but I'm doing my best(Lol)。 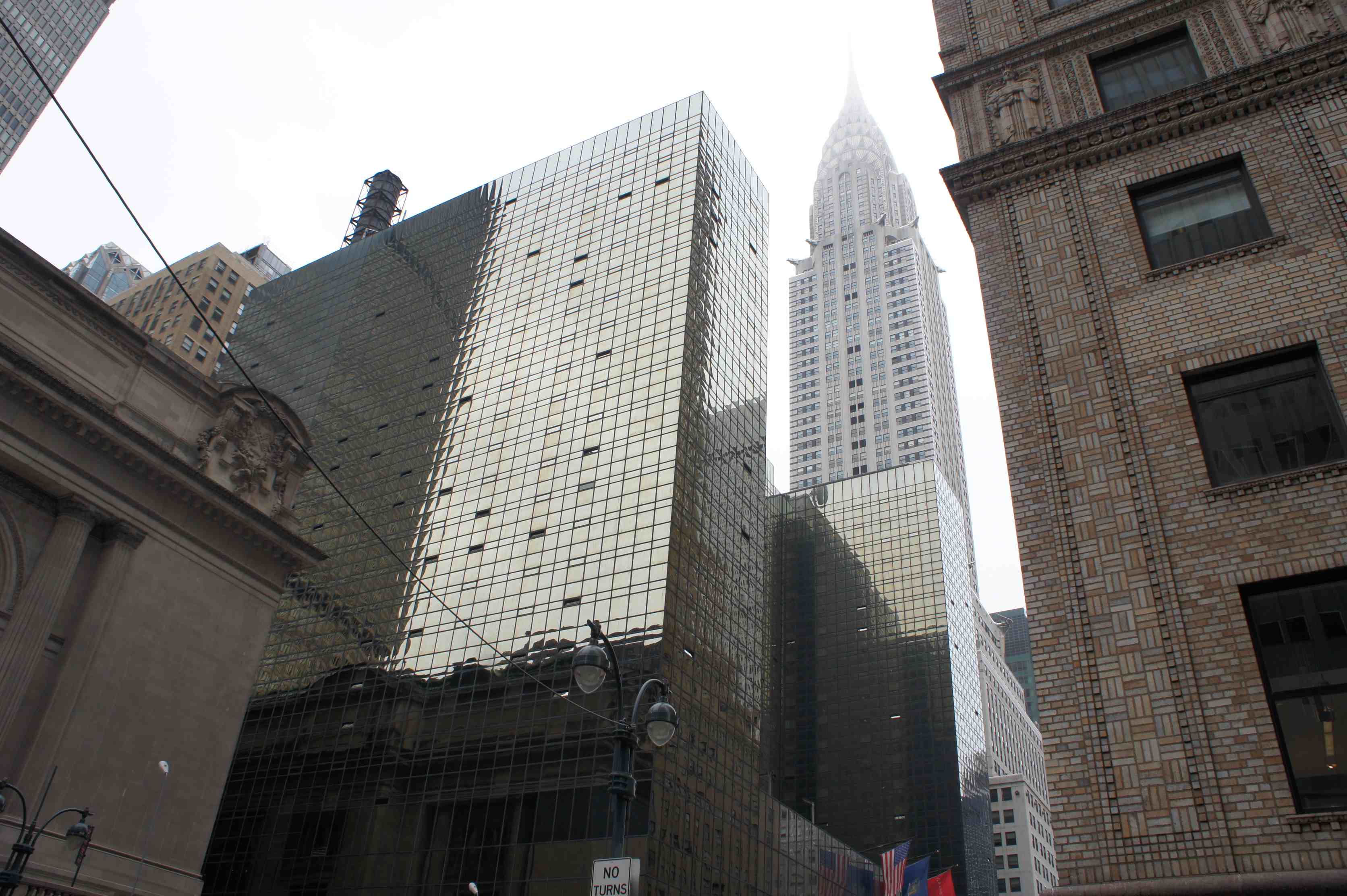 The last day is Christmas!

Most tourist destinations are closed on this day。To see the Christmas illuminations of Dyker Heights、Slowly from morning today。First, head to 9th Avenue from Times Square for a hungry breakfast.、I went down there to the south and searched for a store。

Then、Discover Seven-Eleven! Buy pizza here、I also stopped by a nearby CVS。This CVS is a convenience store and is a chain store all over the United States.、Wide sales floor like a supermarket、And it's pretty cheap。Buy snacks here、Move towards 8th Avenue。Looking at the Empire State Building、Clouds above the building ... I don't like it。Is the view okay in this situation? For the time being、I went north on Broadway and arrived at the hotel。 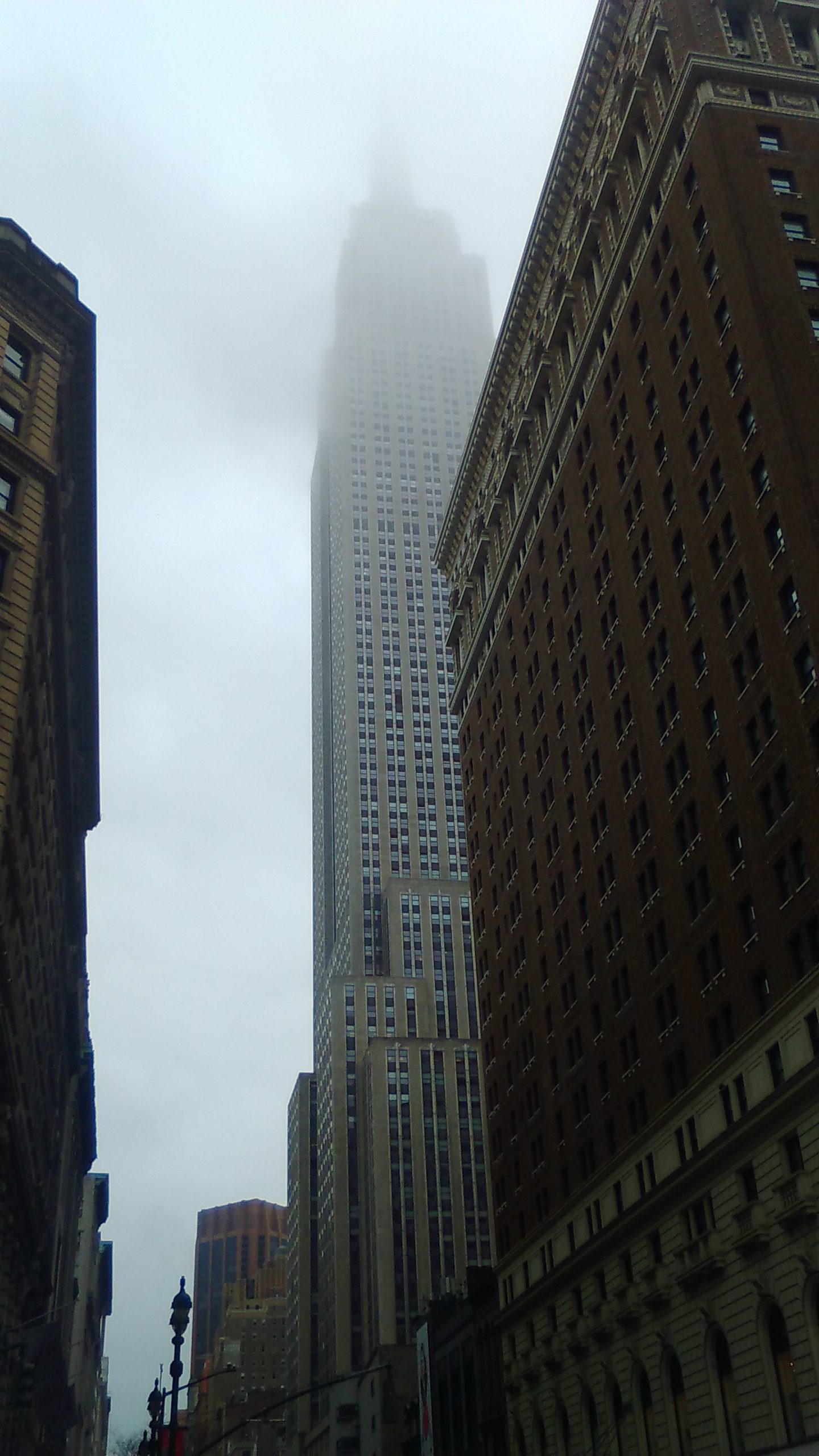 When you enter the entrance, you will see the letters and pictures of the Empire State Building.。The inside is fairly crowded、Not enough to line up。 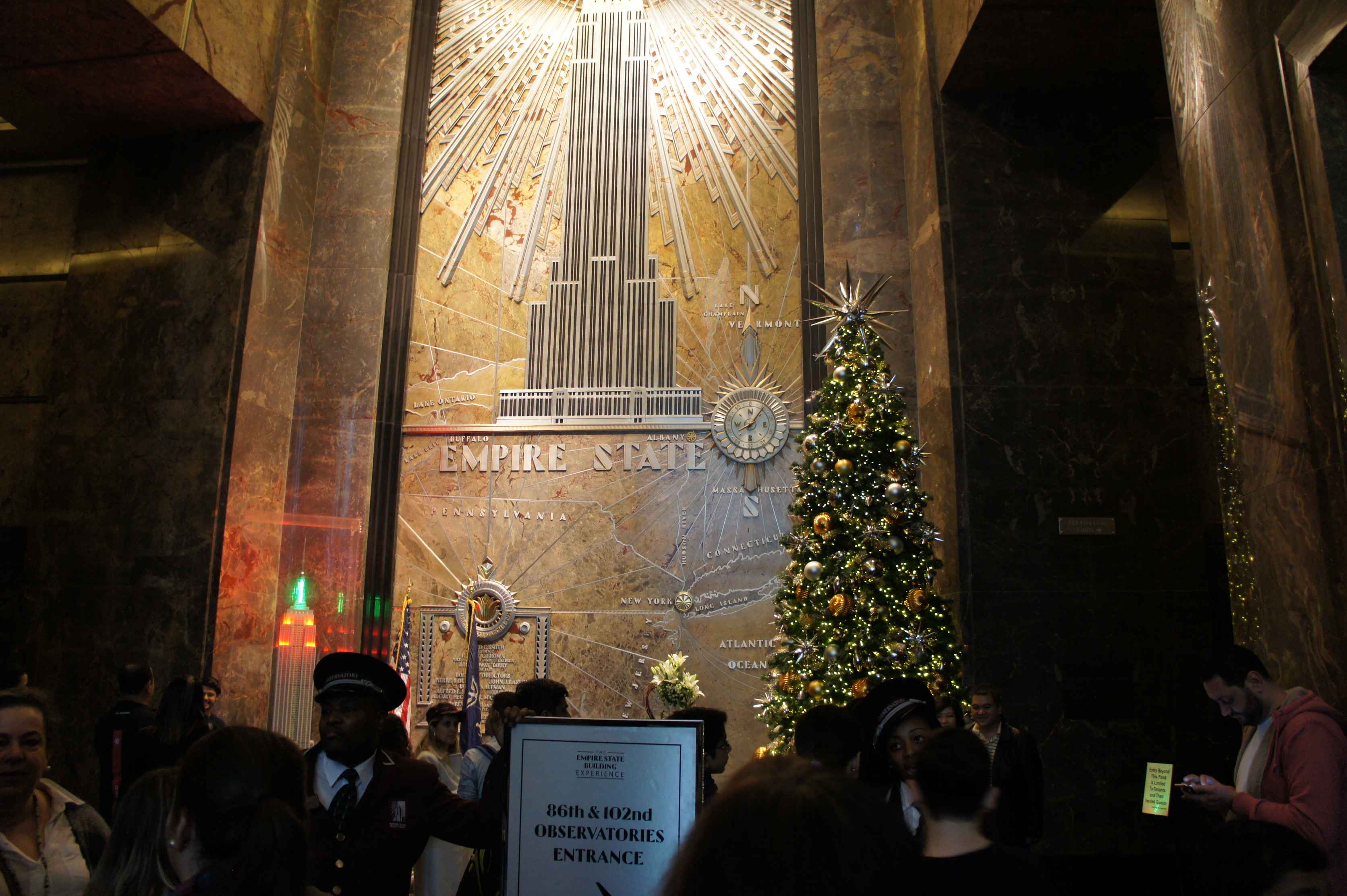 so、When I went up to the building, the information staff said, "It's cloudy today and I can't see anything even if I go up to the building!"。Even if that is said、I'm leaving New York tomorrow so I have no choice but to climb today。Ignore and proceed。And、When you get a ticket、I was impressed with a strange seal。"😥 Zero Visibility" This emoji was really pressed.。

Unlike yesterday's Rockefeller, it's not crowded at all、Immediately arrived at the elevator to the observatory。And、Arrive and go outside、When I try to see the city of New York from the fence ... 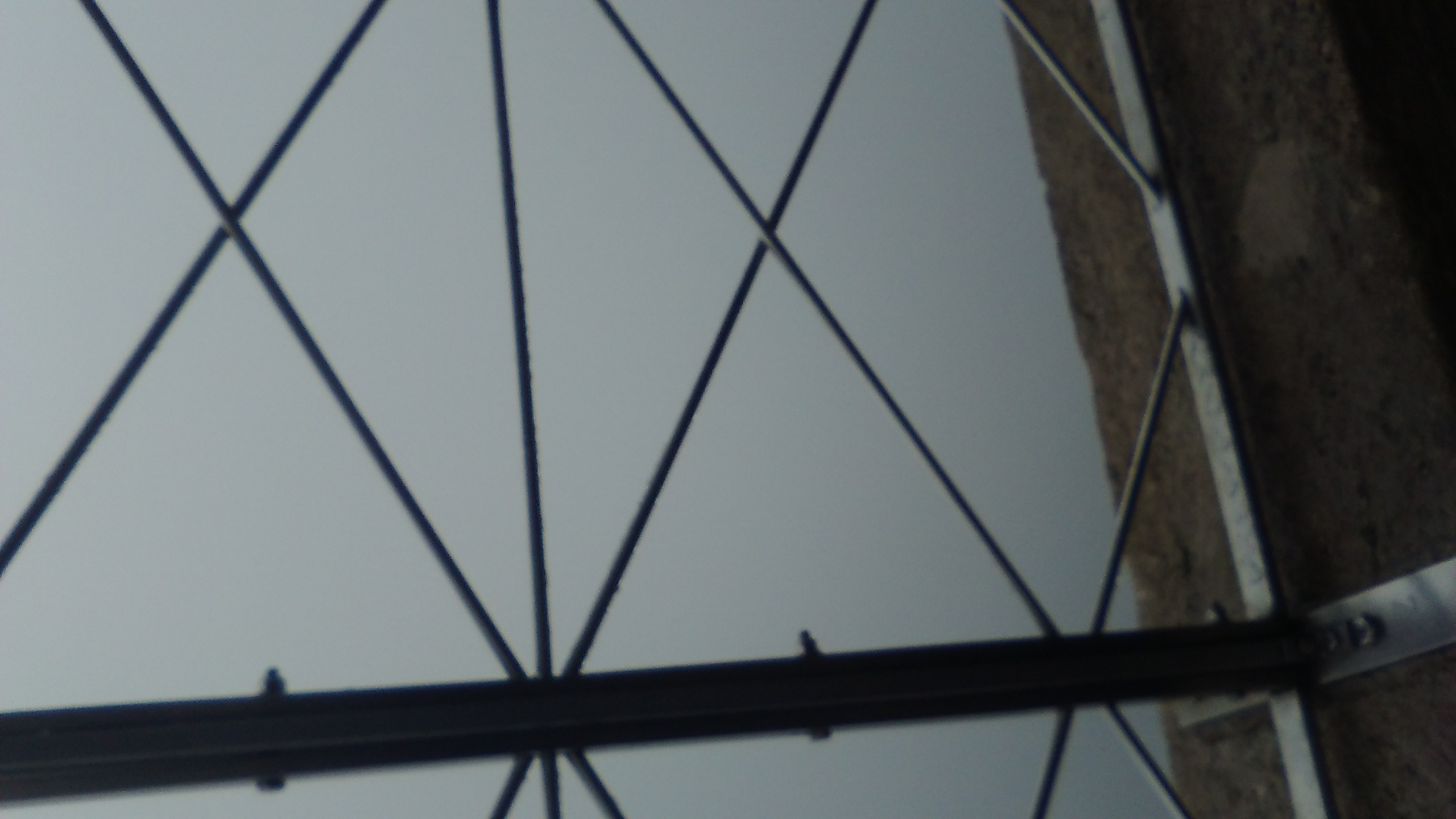 No no no、This isn't there(Lol)。The outside is completely white! It was really zero visibility。The building is completely in the clouds、White even if you turn to the other side。 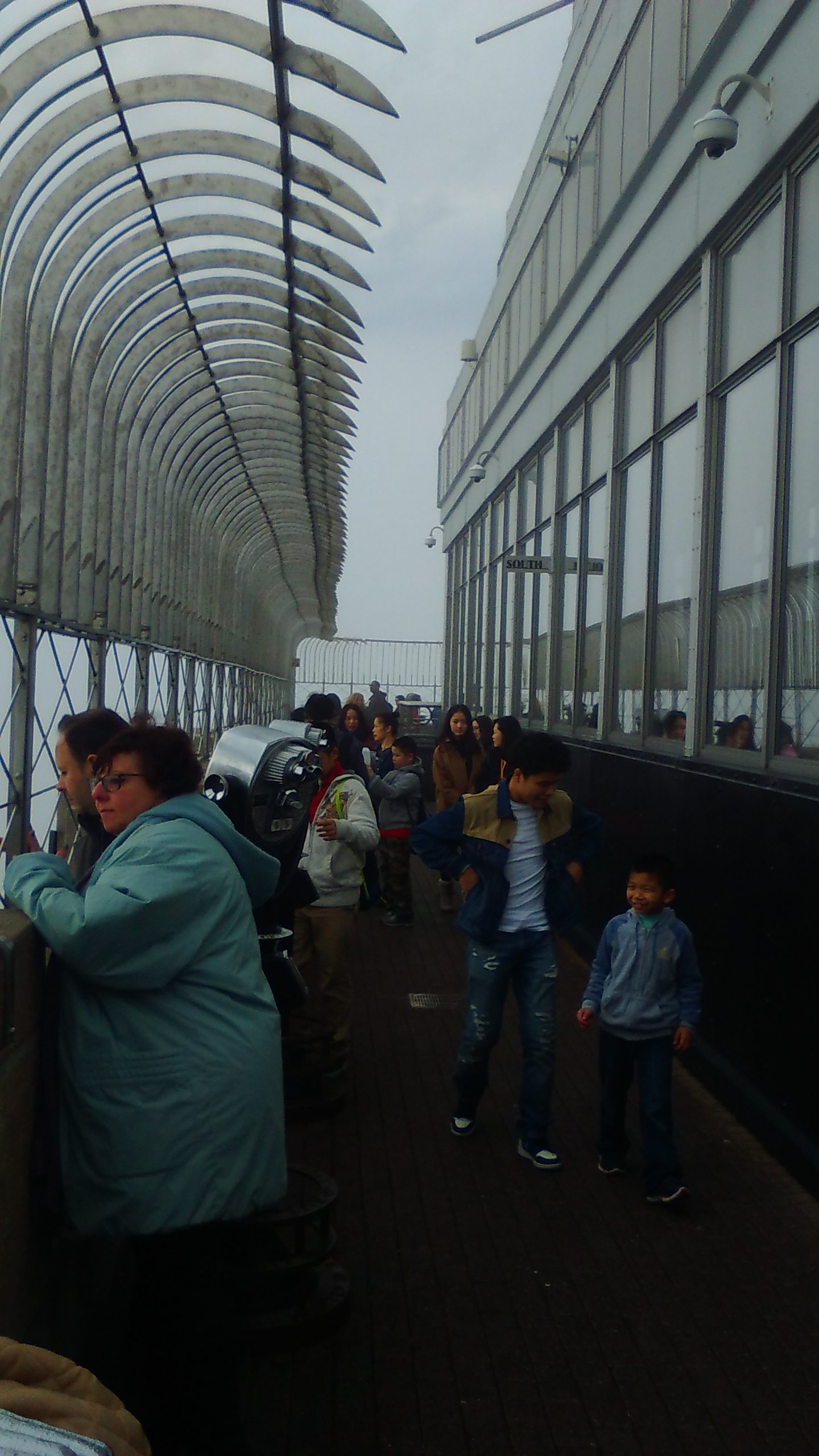 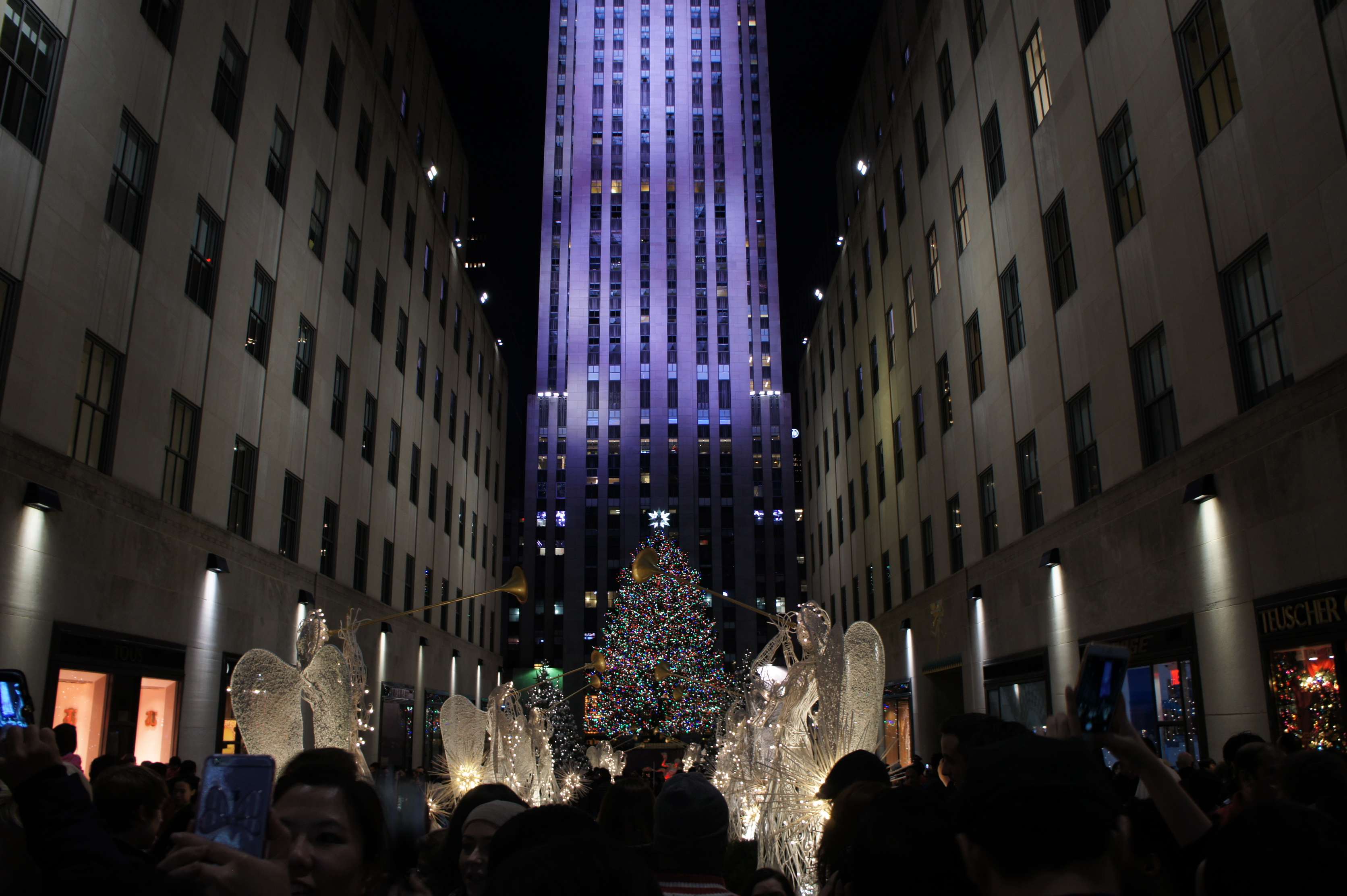 Rockefeller Center headed from Radio City。I've been sightseeing for more than 12 hours since I arrived at the Statue of Liberty。Fatigue is also MAX。That said, I still had some spare capacity 😛 。

"Where is Rockefeller"?When you hear、Told me that it was right there。The road is crowded、If you push through the middle-aged garbage that is difficult to walk、It's getting crowded and eventually it's almost impossible to proceed。Looking ahead, I saw a big Christmas tree。This is the rumored world's largest Christmas tree! and、The most famous skating rink in the world! 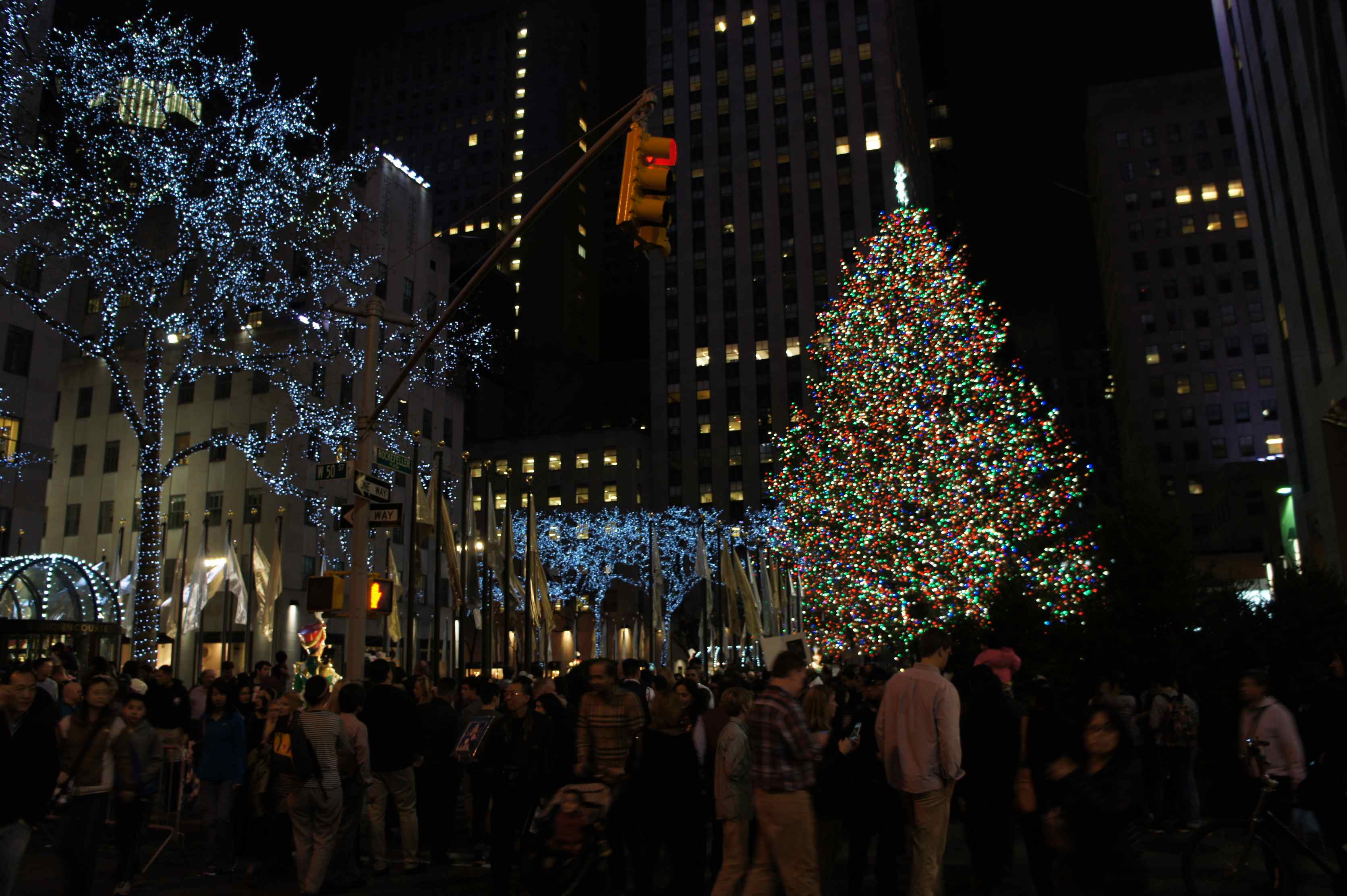 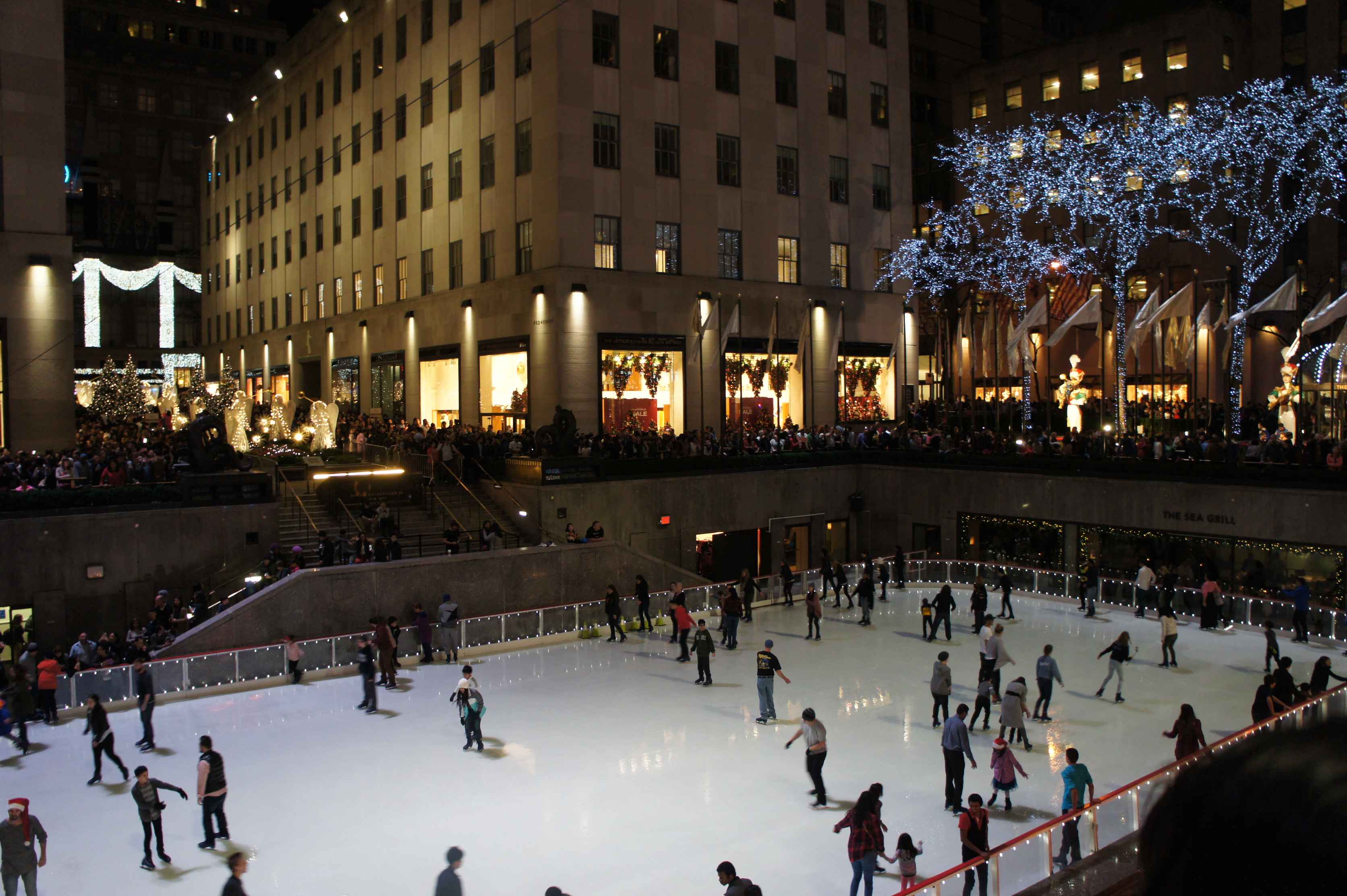 ...... Hmm。Christmas tree is smaller than expected。Some people have collapsed the skating rink、Not very interesting to watch(Lol)。I went through the crowds, but I missed the beat、Having said that, I visited a world-famous spot, so it will be a hot topic, so let's forgive it 🙂

so、When I entered the Rockefeller Center and tried to pick up the ticket ...。Admission is 1 hour and 40 minutes after receiving the ticket。After walking for a long time, I'll wait for a long time ... It can't be helped, so when I wander around the Rockefeller Center, Wells Fargo's ATM? !! Moreover,、There is a step that you can just sit on、The previous customer was already absent。We also piggyback on it。Wells Fargo-sama。

Rest your legs and take a break、10I went to the entrance about a minute ago。First of all, a line to get on the first elevator。Is the elevator on the 3rd floor? Arrived at、From there again the procession。If you go to the back, something like a movie screening is transferred by a projector、I came to understand the history of Rockefeller。There is also a shooting point on the way。

After waiting for a long time、I finally got on the elevator。Like a sky shuttle elevator、Finally to Top of the Rock! When you get on the elevator, it becomes pitch black、Projection on the ceiling、And the sound。Visual sense with a sense of gravity that seems to rise steadily、Arriving in a few minutes while tasting the hearing。When I got off the elevator, there was no longer a line。

There is a small escalator along the road、Finally when you climb there! 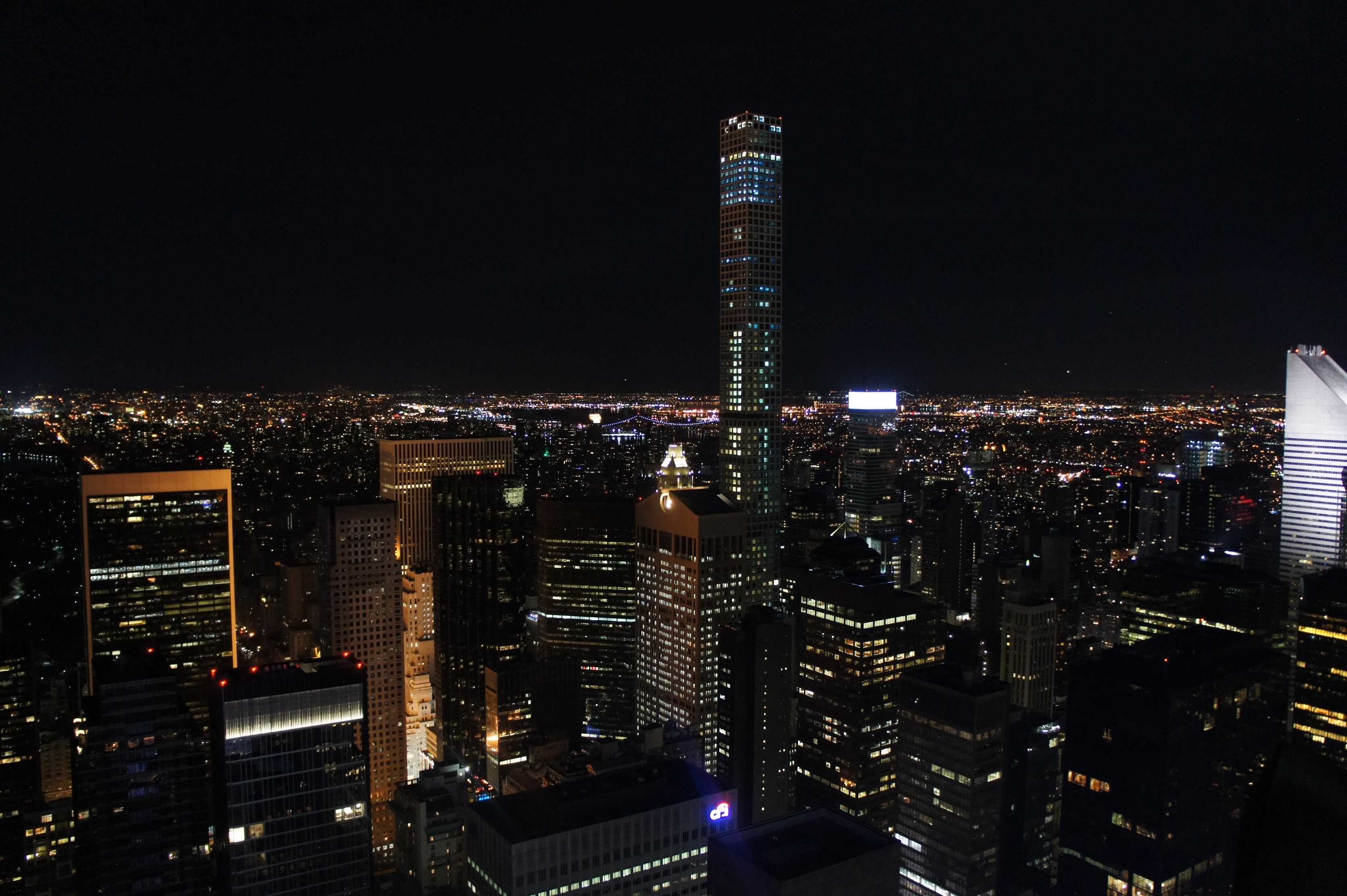 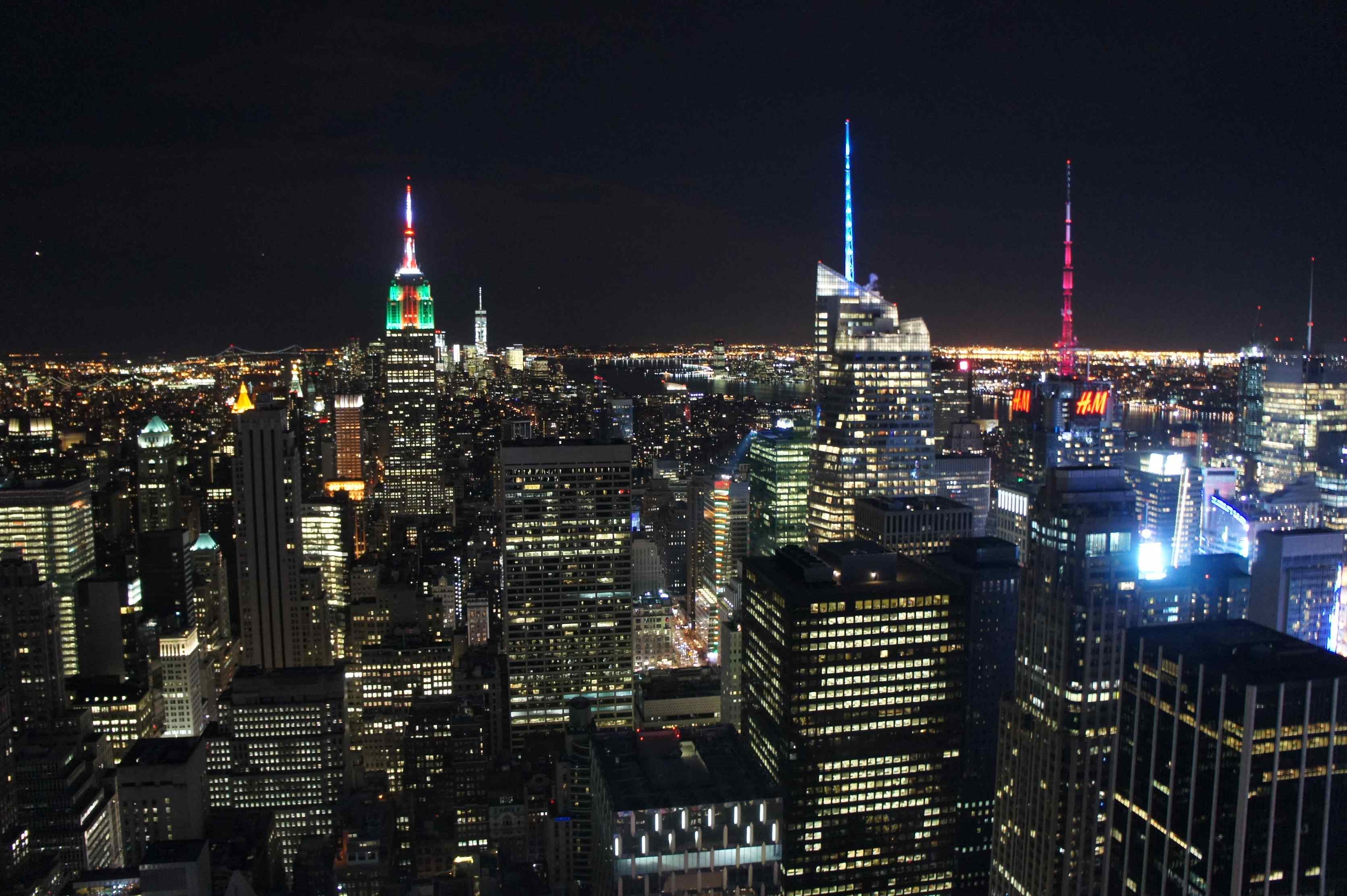 No no no、It ’s a wonderful night view.。There are many people、I have plenty of room to take pictures without being disturbed。The Empire State Building turns green or red。I wonder if I'll be looking at this side from there tomorrow (and、I was thinking at this time ...)。

After enjoying the night view, get off the elevator again。Return early。I'll be waiting in the elevator、I was able to get on immediately。I tried to go to the Empire State Building today、As expected, give up。I decided to carry it over on the last day。 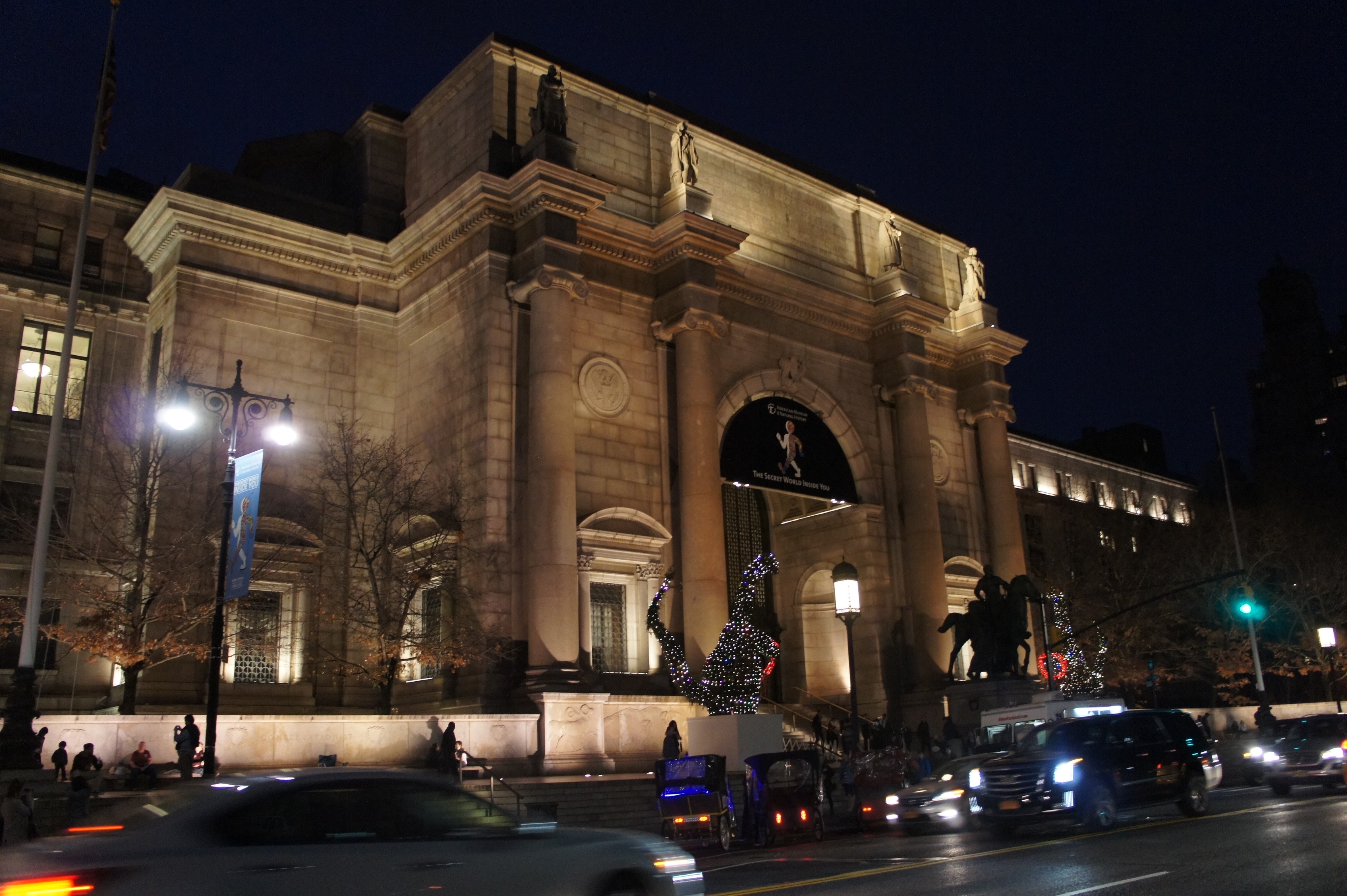 Failure again here。If you want to use a metro card to enter the station and ask the station staff to go to Chelsea Market、After making a slightly embarrassed face、Instructions to take this train and change at the next station。When you actually get on the train、One station is ridiculously long、The train after changing trains is also long。I got off at Christopher Station and walked a considerable distance from there to Chelsea Market。later、I saw the map、Apparently the first train I used was not the subway on Manhattan Island、A national train that goes to New Jersey and then returns to Manhattan? It was discovered that he was using。Moreover, the station to get off is not Christopher station、14I should have got off at Bandori station。

Discover a Google building on the way to Chelsea Market! 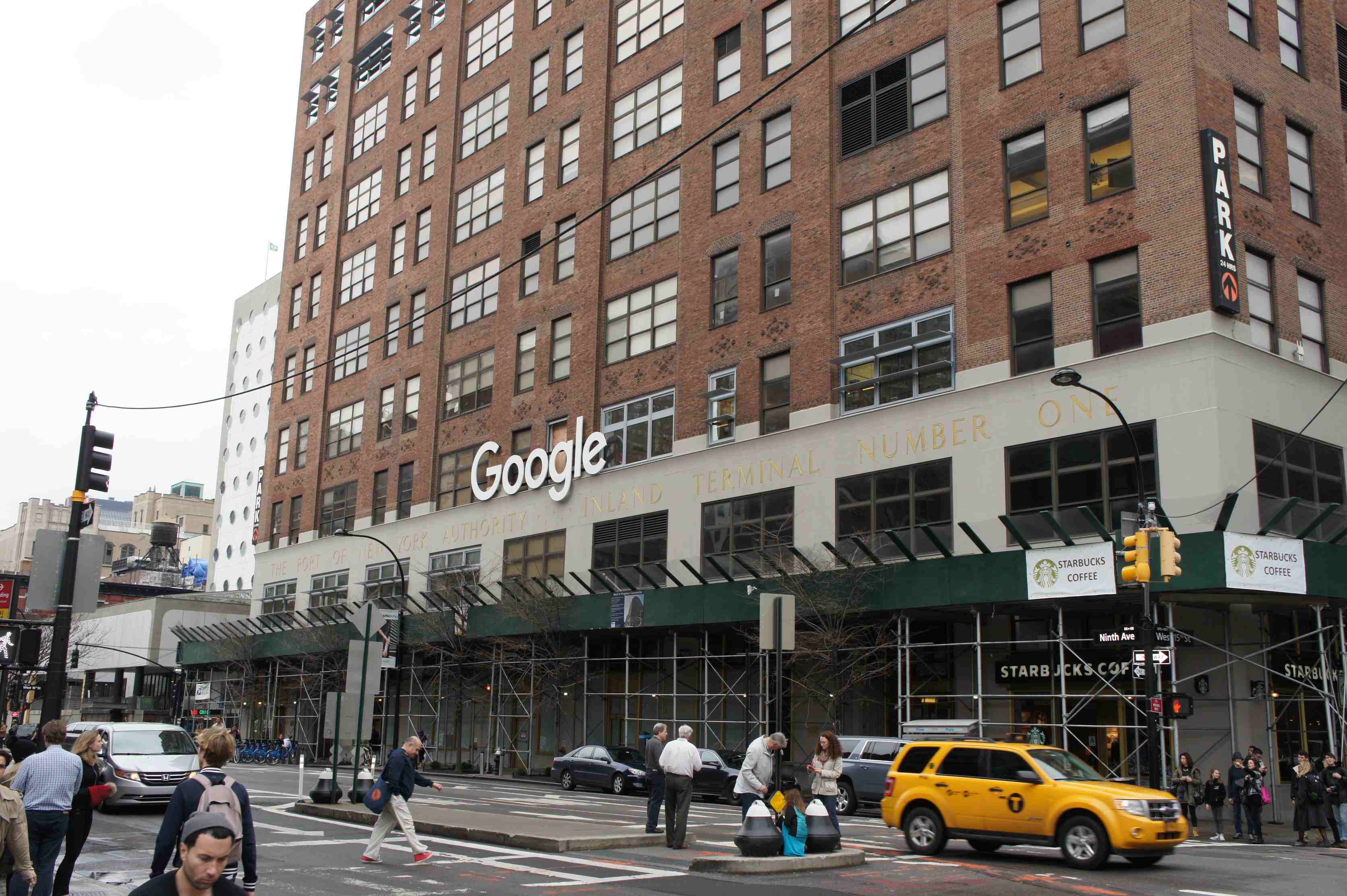 Big brown building with big deck and logo。There is a Chelsea market in front of it、I thought I'd eat, but I didn't have time so I bought only juice and left immediately。Enter from the east of the market, exit to the west, and look up to see the high line.。I climbed up and headed north。 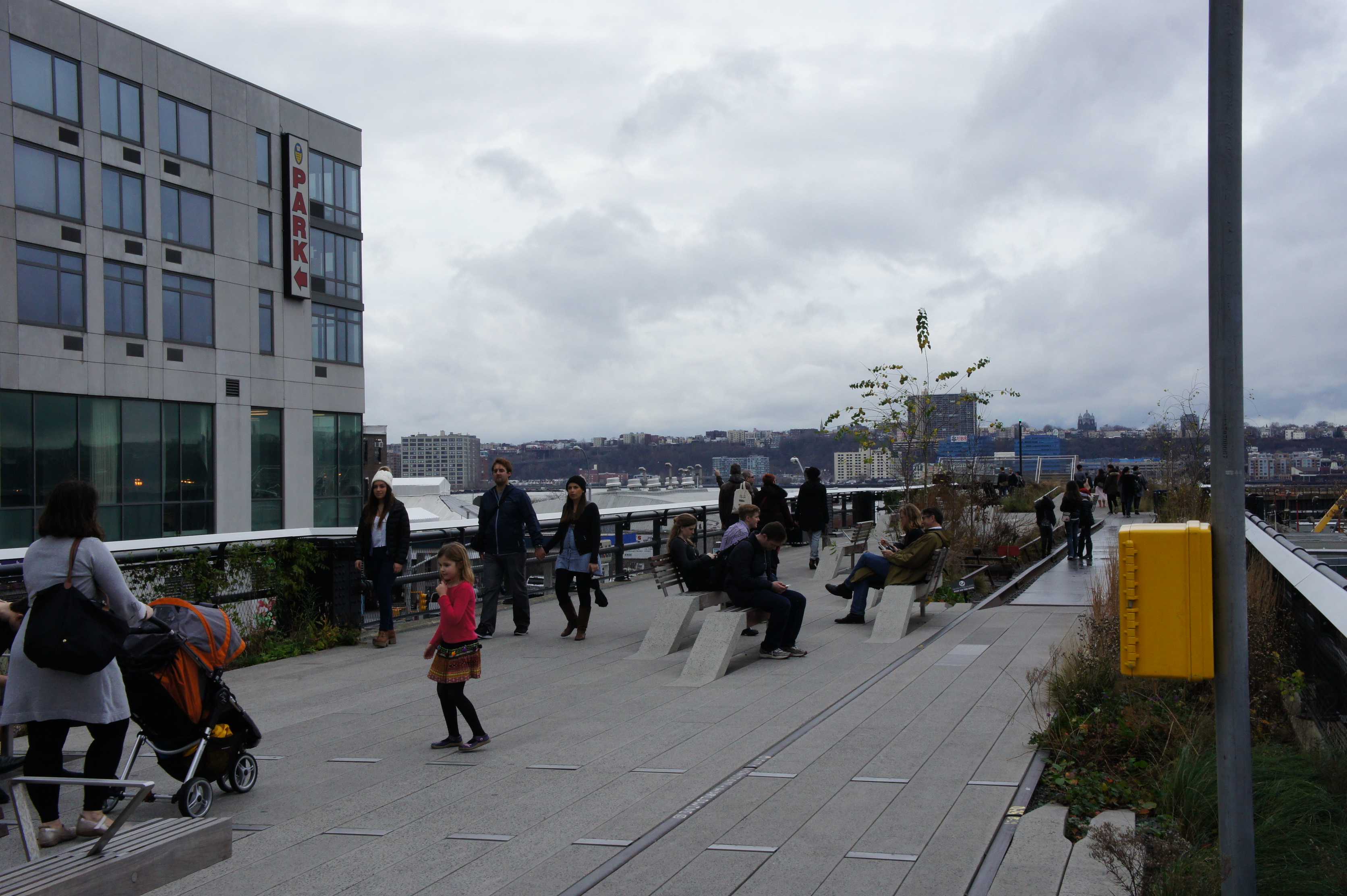 The end point of the high line after about an hour。It was a very long distance、Intrepid coming soon from here。There were many people at the beginning of the high line,、There were few people on the northern edge and it was quiet。

As you walk along the coast, you will see a large battleship in the distance.。That must be Intrepid! 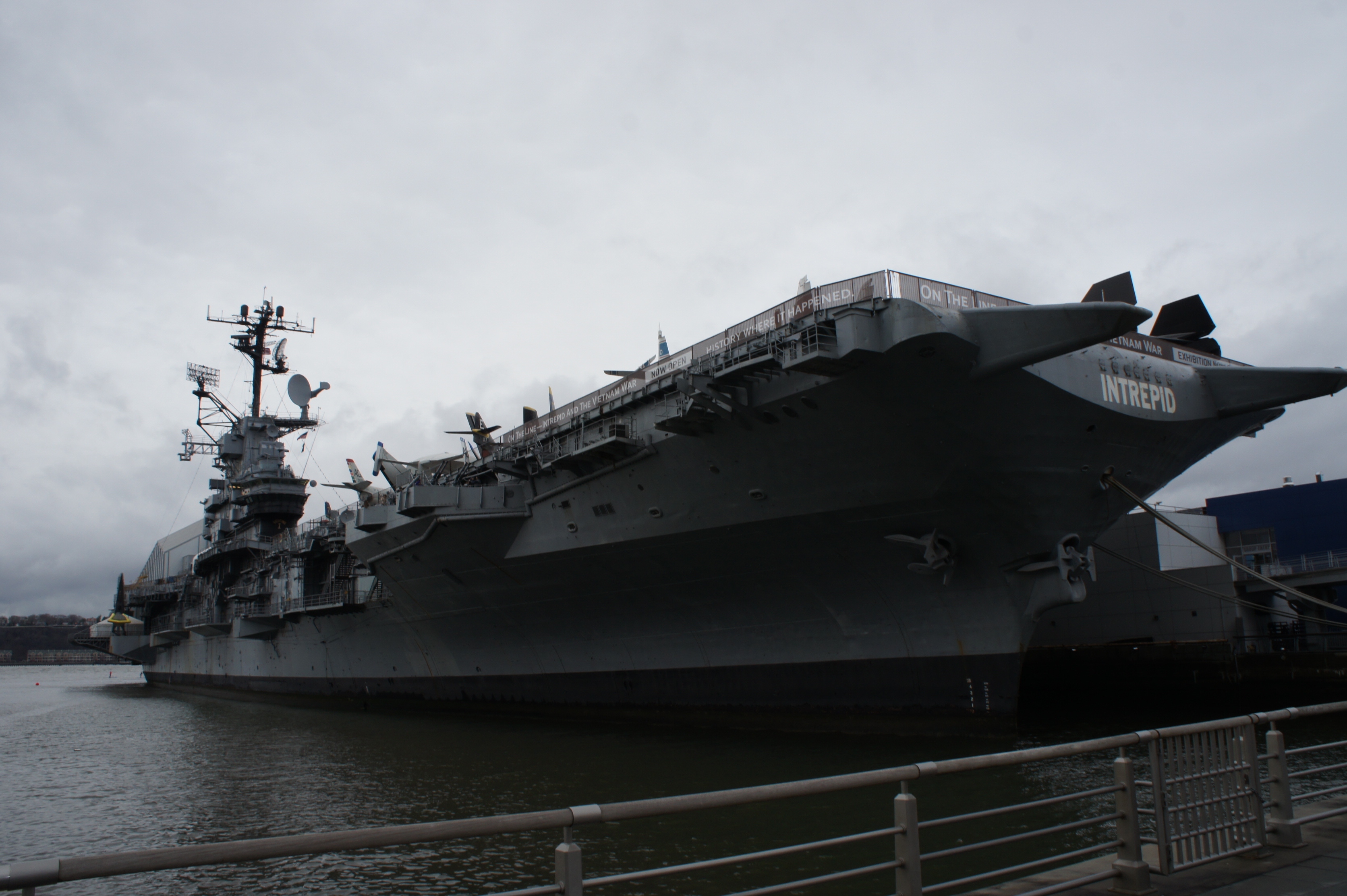 Security gate as usual when heading to the museum entrance。Everywhere in New York there is a security gate。If you buy a ticket with a city pass and head to the audio counter、What a charge。I wasn't so interested in it, so I declined and went to the deck by elevator.。

Since Intrepid is an aircraft battleship, many aircraft were exhibited on the deck.。There were a lot of things、I'm not familiar with fighters so I'm not sure。 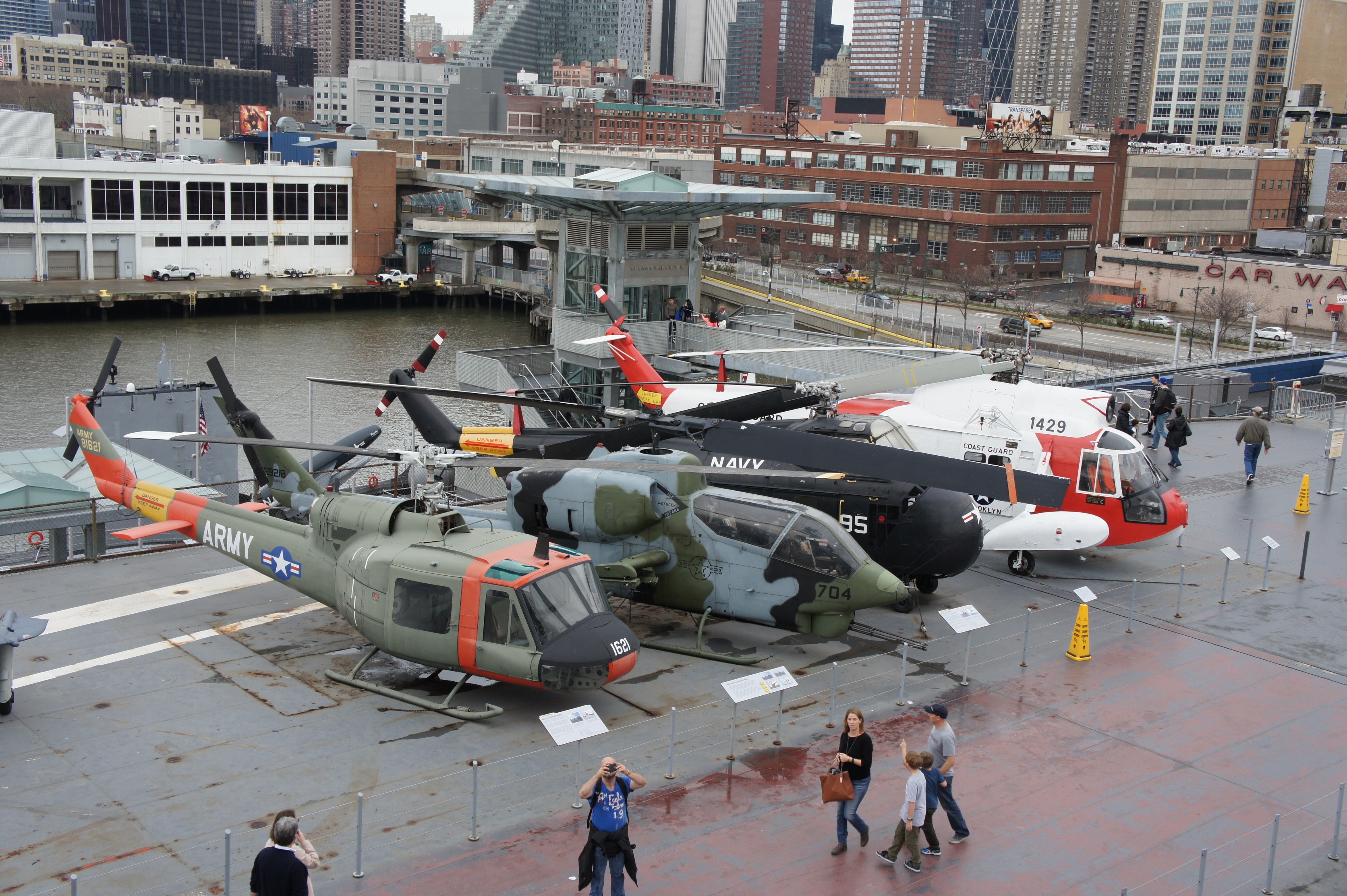 Heading to the stern, the pavilion。When I went inside, I was asked to show my ticket, so I showed the ticket I got at the entrance。And、When you pass through the gate, the Enterprise issue is huge! 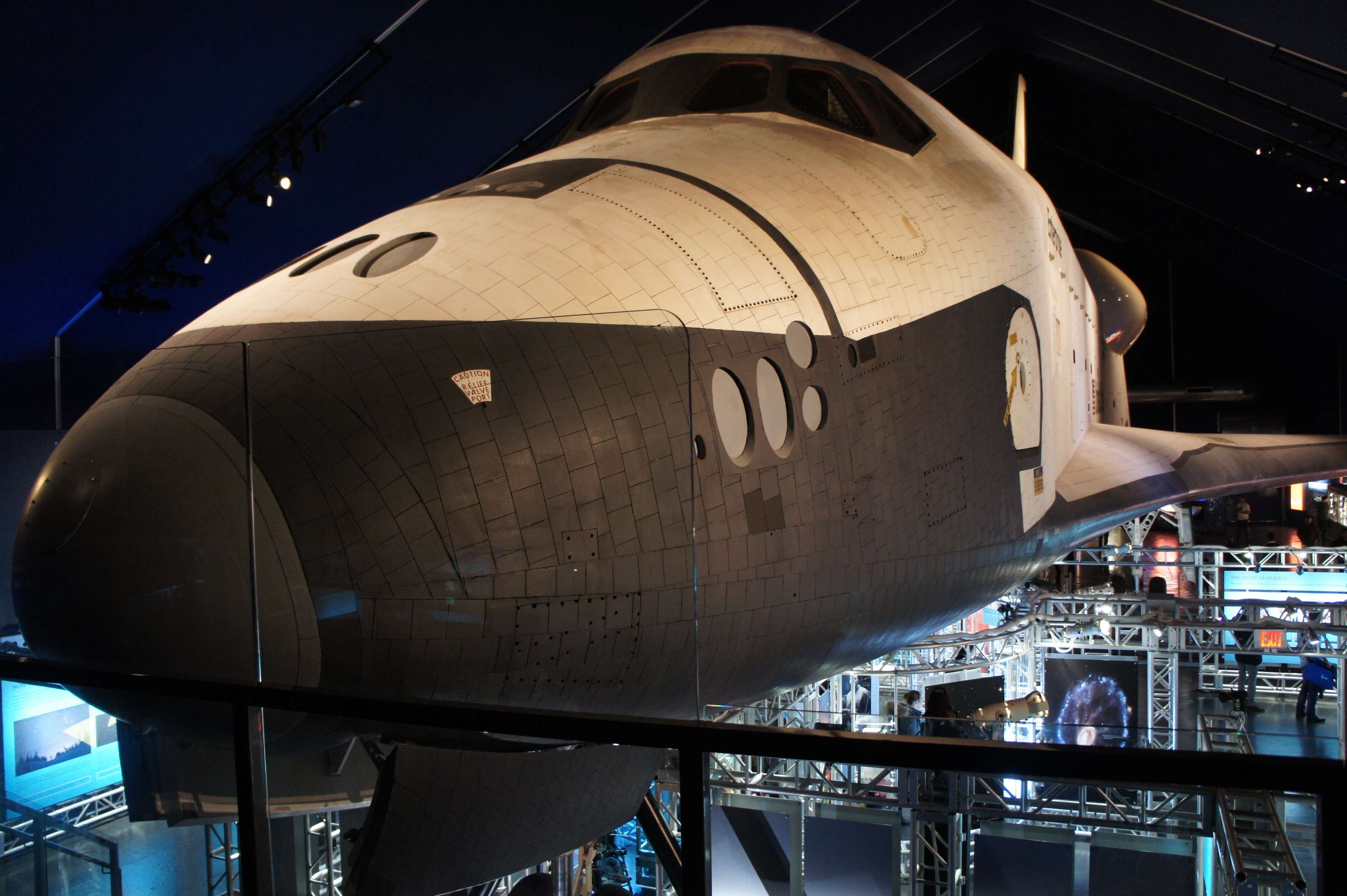 Finally, when I headed to the exit, there was a line, so I thought something and asked, it seems that I can put it in the submarine。You have to wait for about an hour to get in。Well、I went to the next natural history museum to take the next opportunity。

Intrepid is far from the center so I think I should use the bus、Unfortunately I don't have a bus map so I don't know。I had no choice but to walk north from 42nd Street Station on the blue line and soon arrived at 81st Street Station.。Easy to understand because the station name has Museum of Natural History。If you have a city pass, you can enter the museum as it is from the subway, so it's easy。

Show me your ticket、Go through the security gate (again ...)。It's this museum、Apparently, first climb to the top floor by elevator、It seems to be efficient to watch while going down from there。

First of all, the popular dinosaur exhibition。 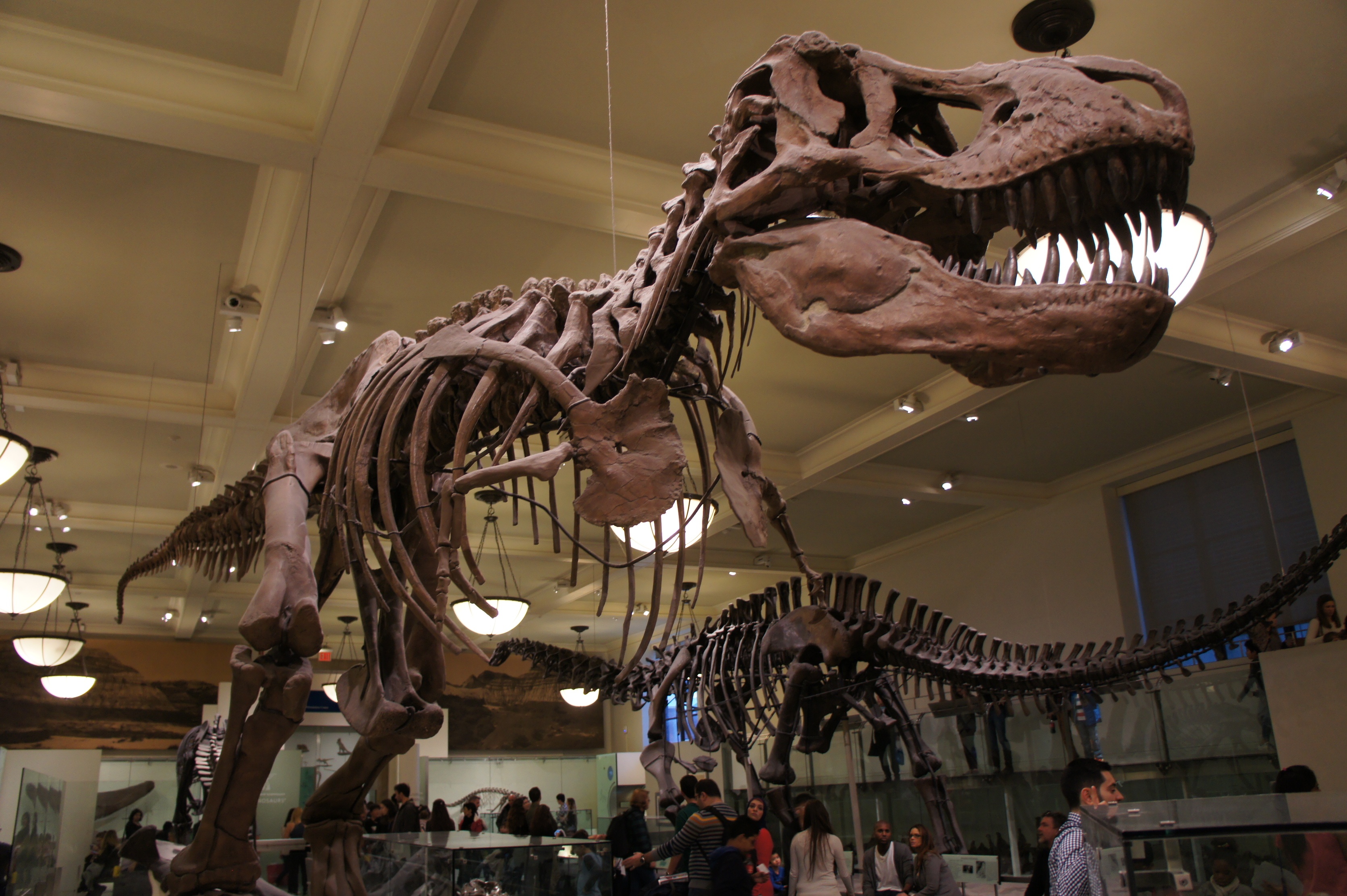 It seems that this was also the shooting stage for the Night Museum、Various dinosaurs are on display。There are models of famous dinosaurs such as Tyrannosaurus and Triceratops, so dinosaur lovers will love it.。

If you go downstairs, the number of people will decrease at once.。Few people are interested in such a facial image.。 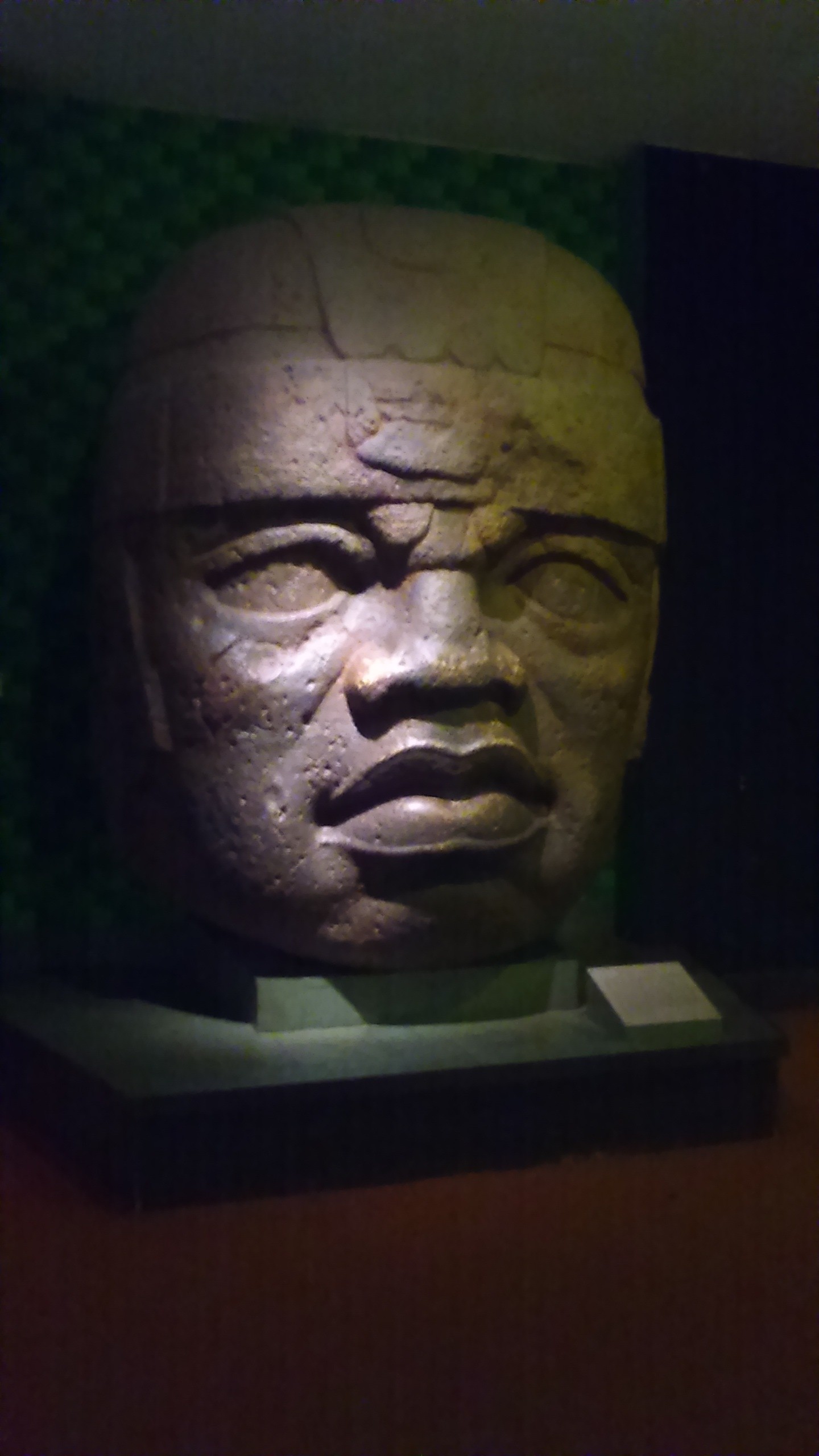 There is a food court in the basement and you have a chance to take a break! How many kilometers did you walk so far?(Lol)。Leave the American Museum of Natural History for a short break with a drink of water。When I went outside, it was already dark and the museum was lit up beautifully.。 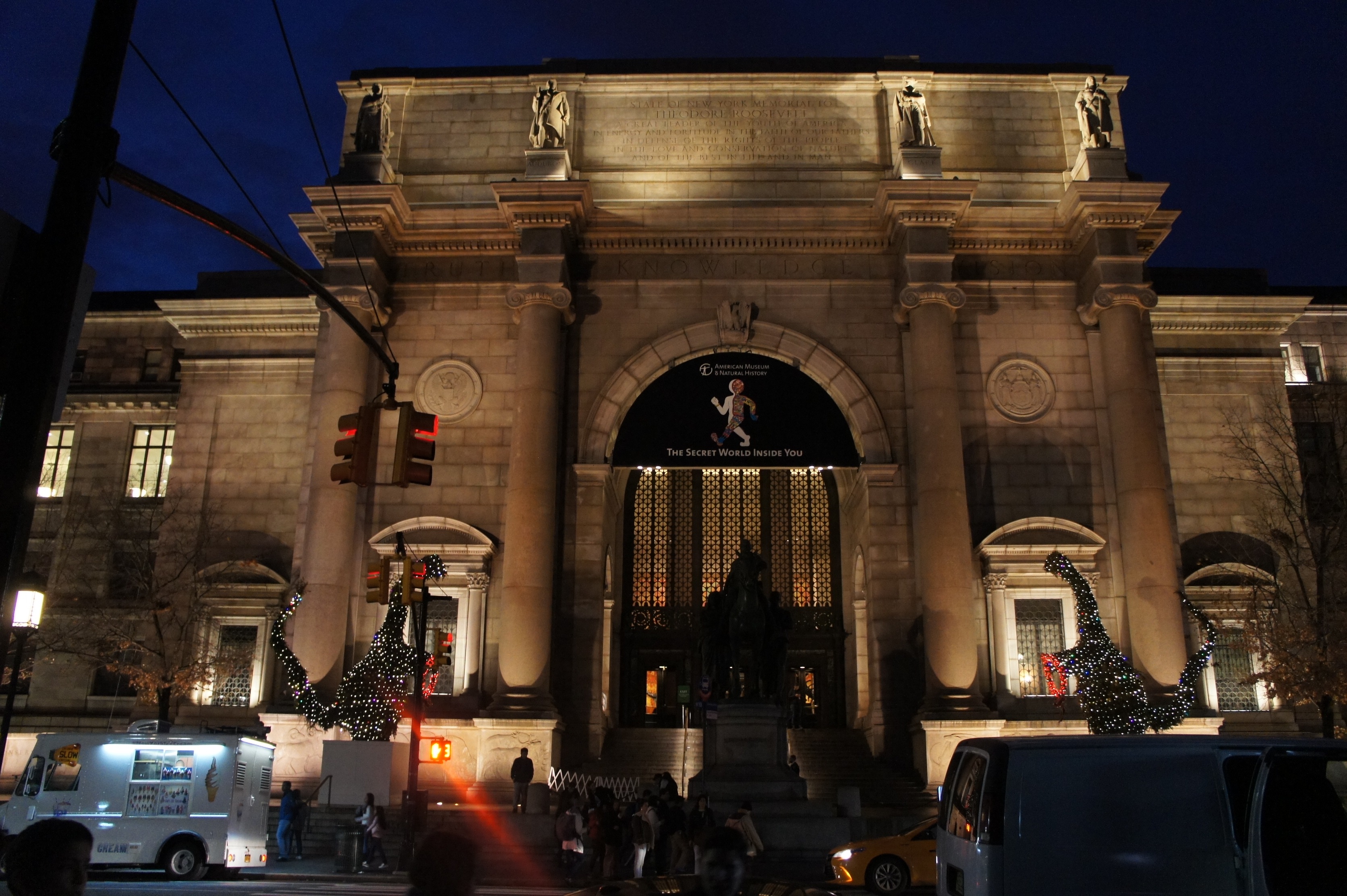 Head to Carnegie Hall along Central Park。Carnegie at Carnegie Hall、Named after Andrew Carnegie, the steel king who built this building (not Dale Carnegie, who moves people!)。The main hall is a large hall that can accommodate a little less than 3,000 people and has a high sound effect.、Because it is located in the center of a big city, you may hear the sound of a car horn.。

It's night, so it's not performed, so just enjoy the appearance and go straight to Fifth Avenue。 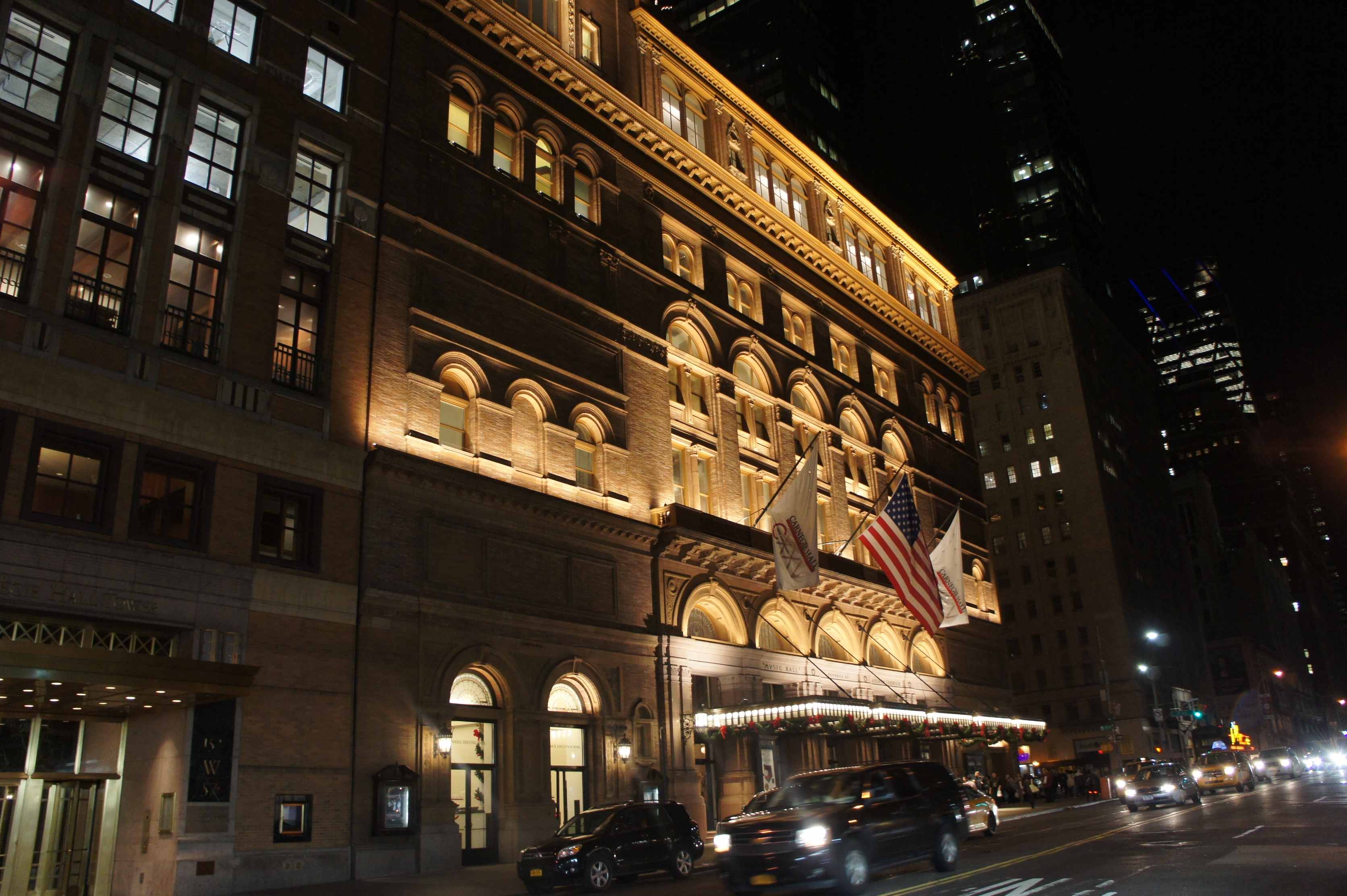 Fifth Avenue is where Central Park on the left hand side is interrupted。This is the most exclusive shopping area in the world, let alone New York。Land prices are also quite high、Luxury brand shops line up。About 7 million yen per square meter。As you can see, Fifth Avenue has the image of a luxury brand shop.、Recently, stores for young people have also opened.、There is also UNIQLO。 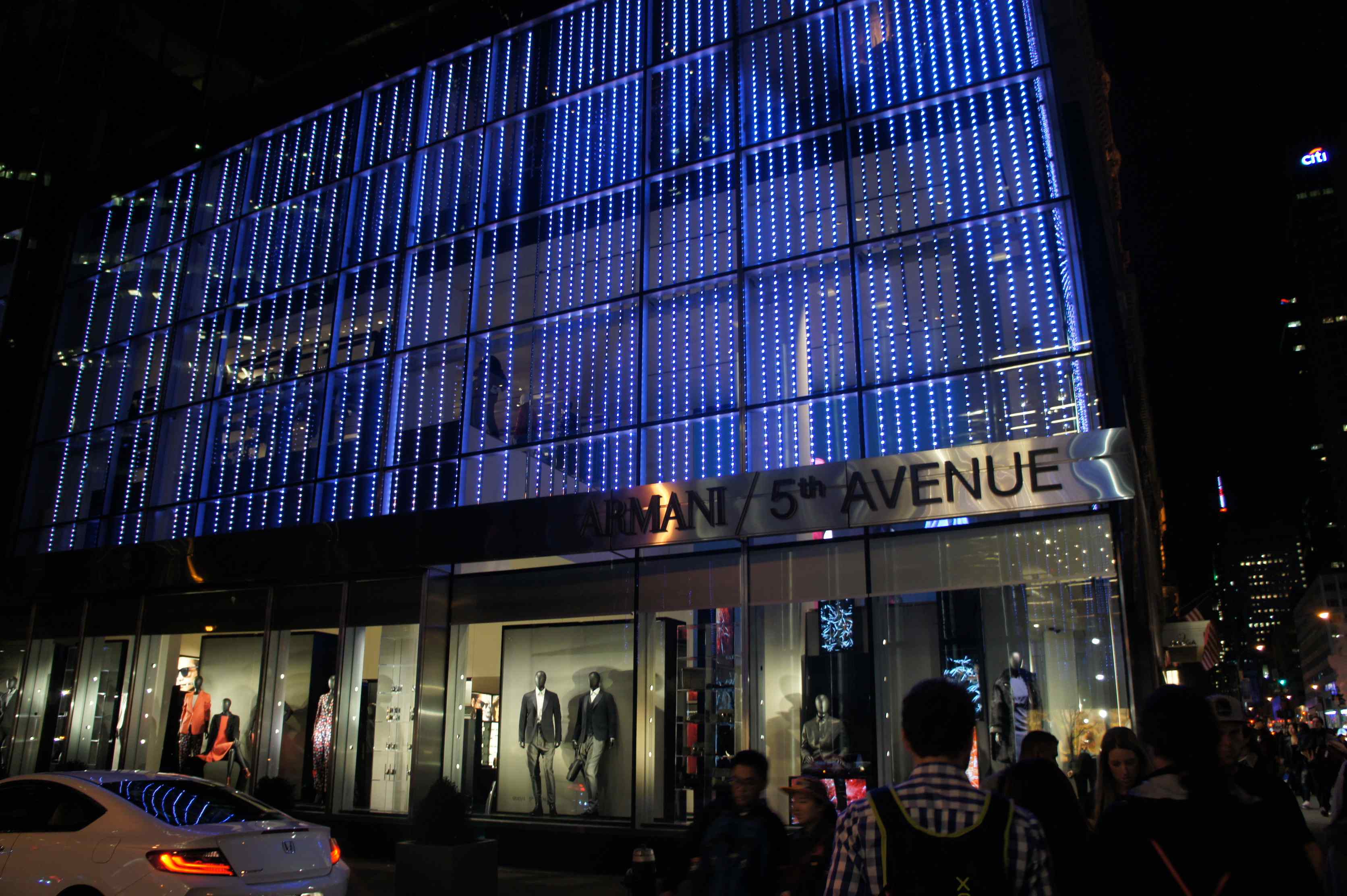 Walk fast to Radio City。Arrive when you go off Fifth Avenue and proceed one block! This is a hall where musicals are held, and the capacity is about twice that of Carnegie Hall, which is a large scale of less than 6,000 people.。It's famous for the Tony Awards ceremony for Broadway productions.。By the way、The Tony Awards are nicknamed Antoinette Perry, co-founder of the American Theater Wing.。 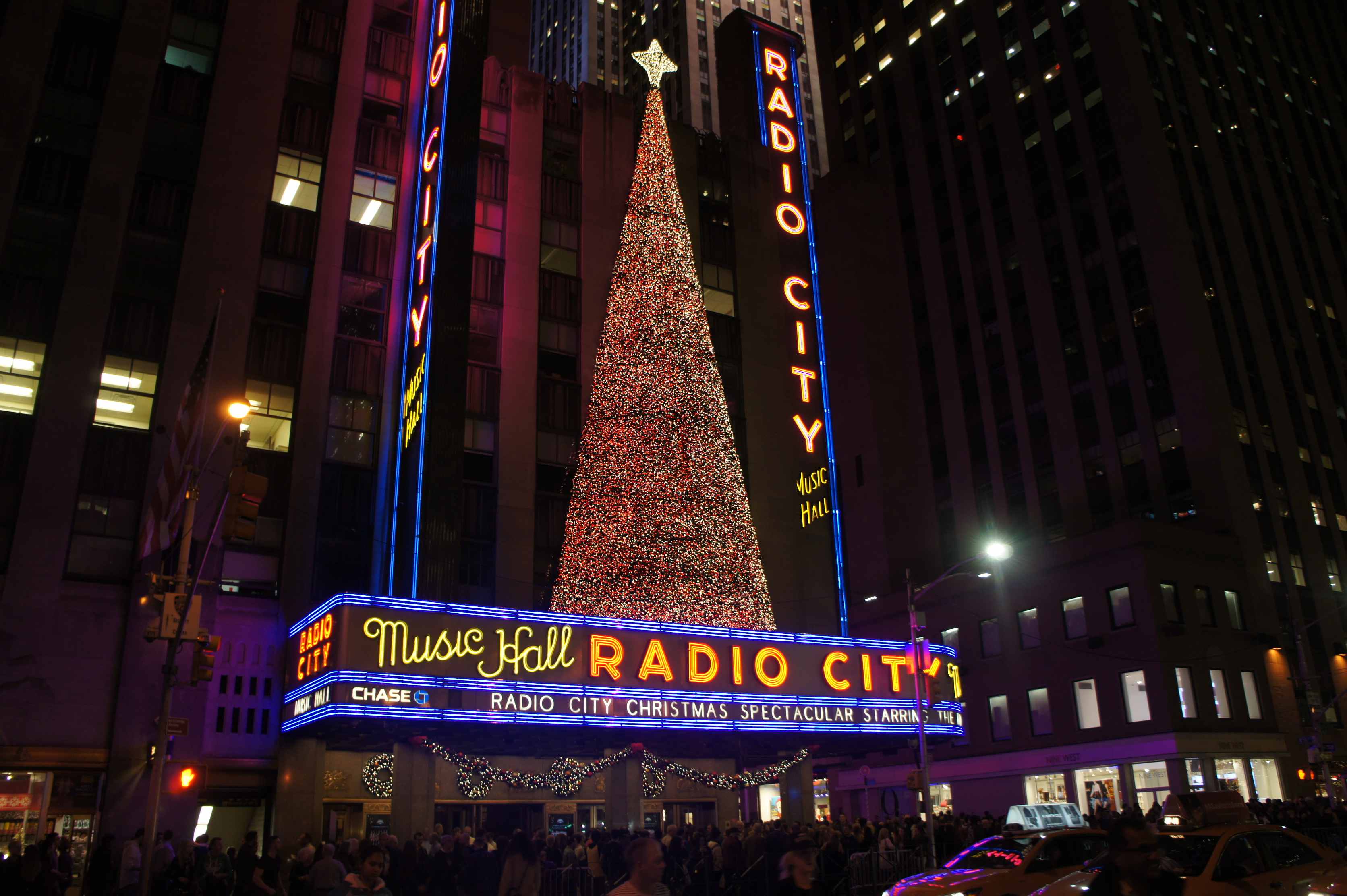