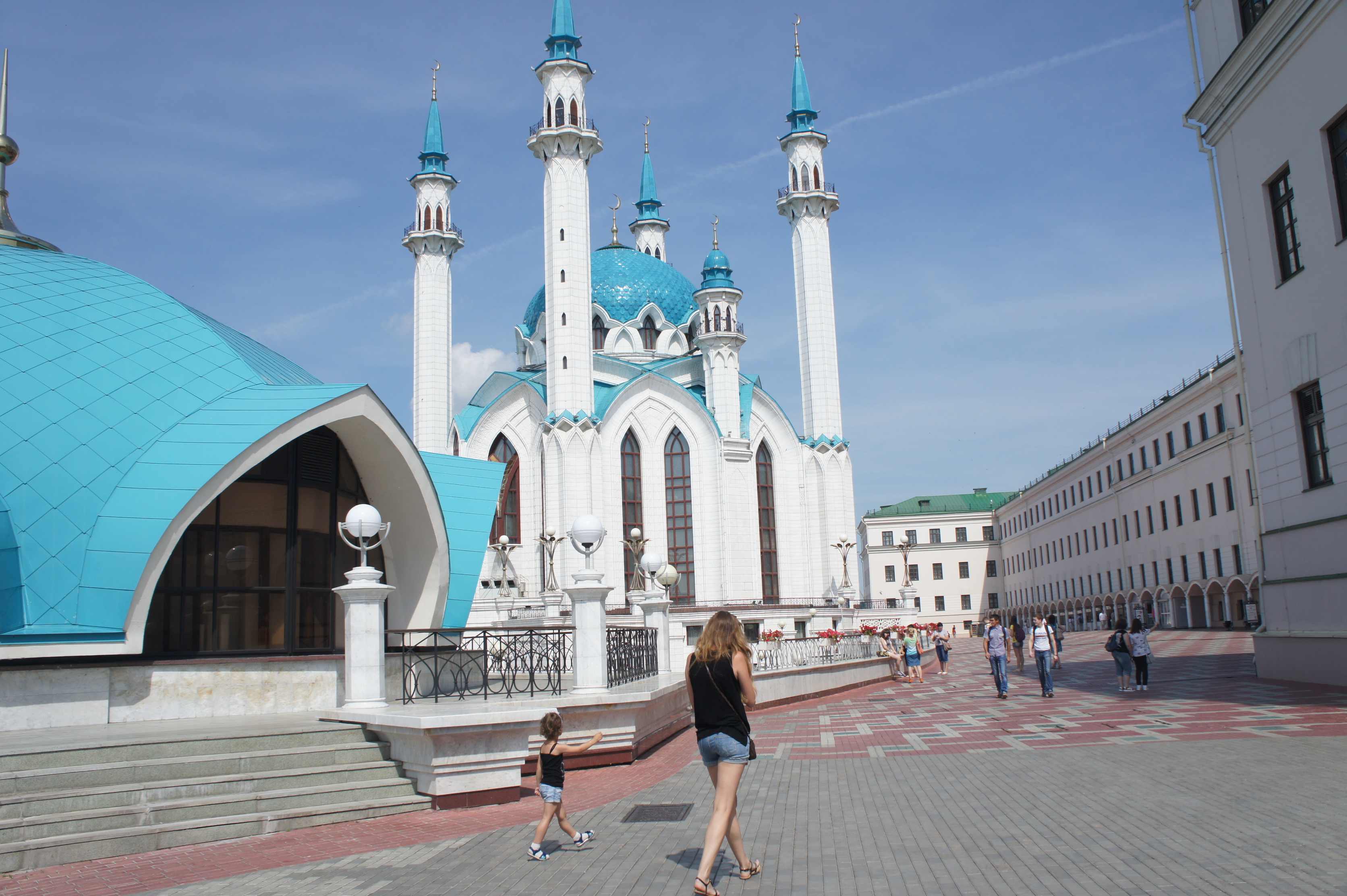 Speaking of Kazan, Kazan Kremlin。It is the fastest building registered as a World Heritage Site in Kazan.。

It costs about 30 yen each time on a very cheap subway.、Save even more with a prepaid card。 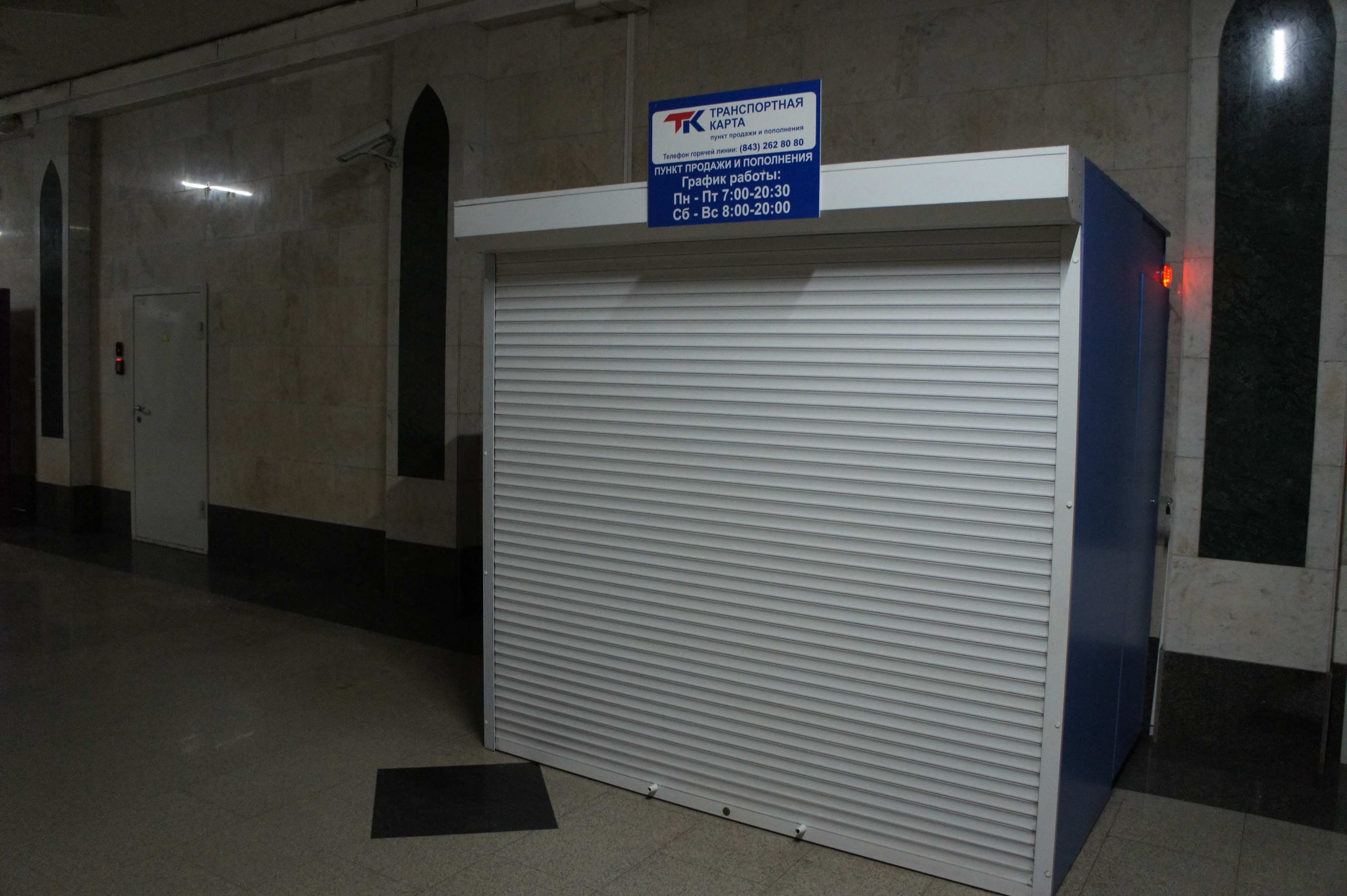 Prepaid cards can be purchased at the ticket office inside the station。7 on weekdays from Monday to Friday:00～20:30、8 on Saturday and Sunday:00～20:00It is written that it is open until。I mean, I wonder why this photo was taken around noon。Is it during lunch break? 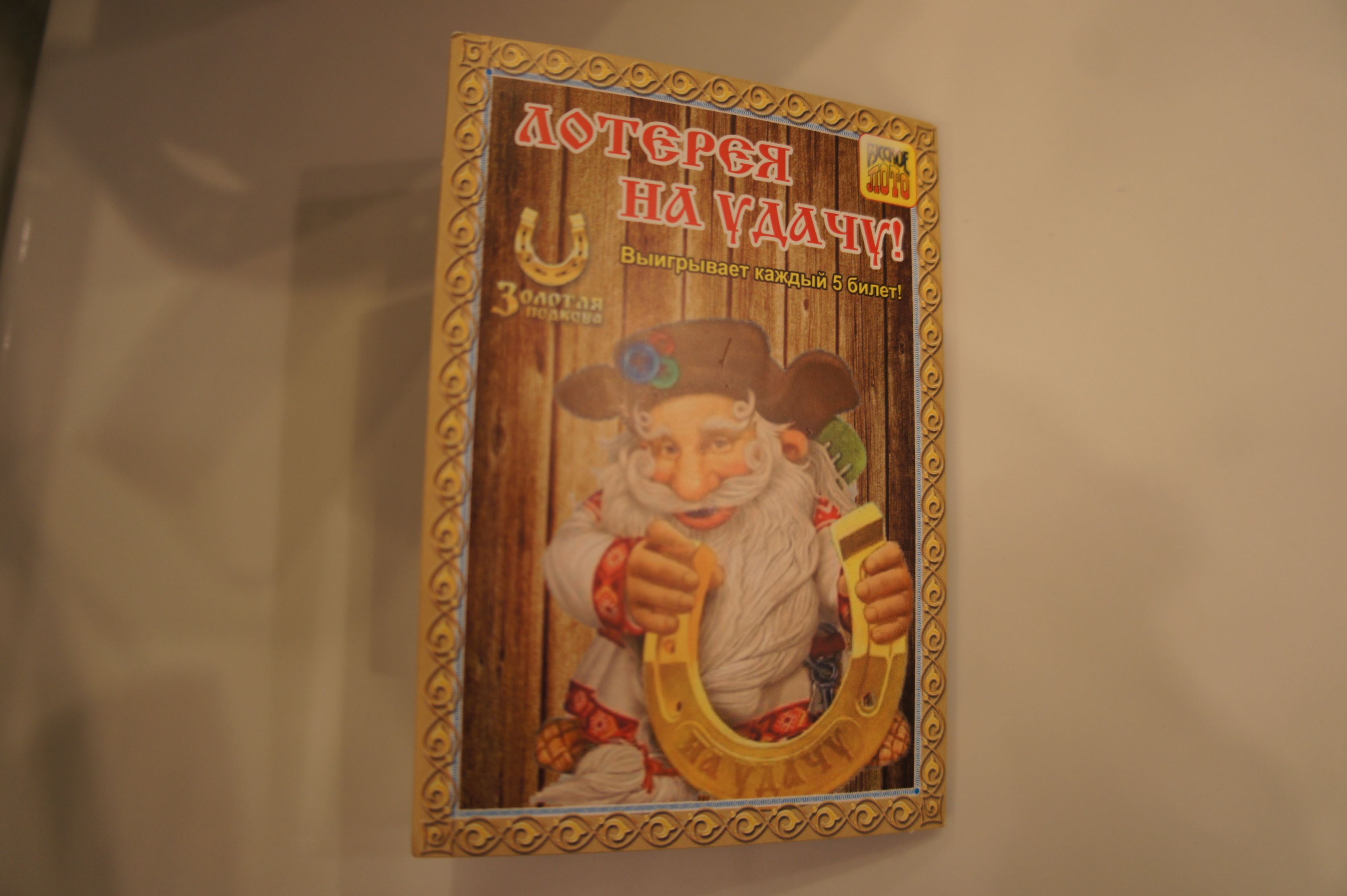 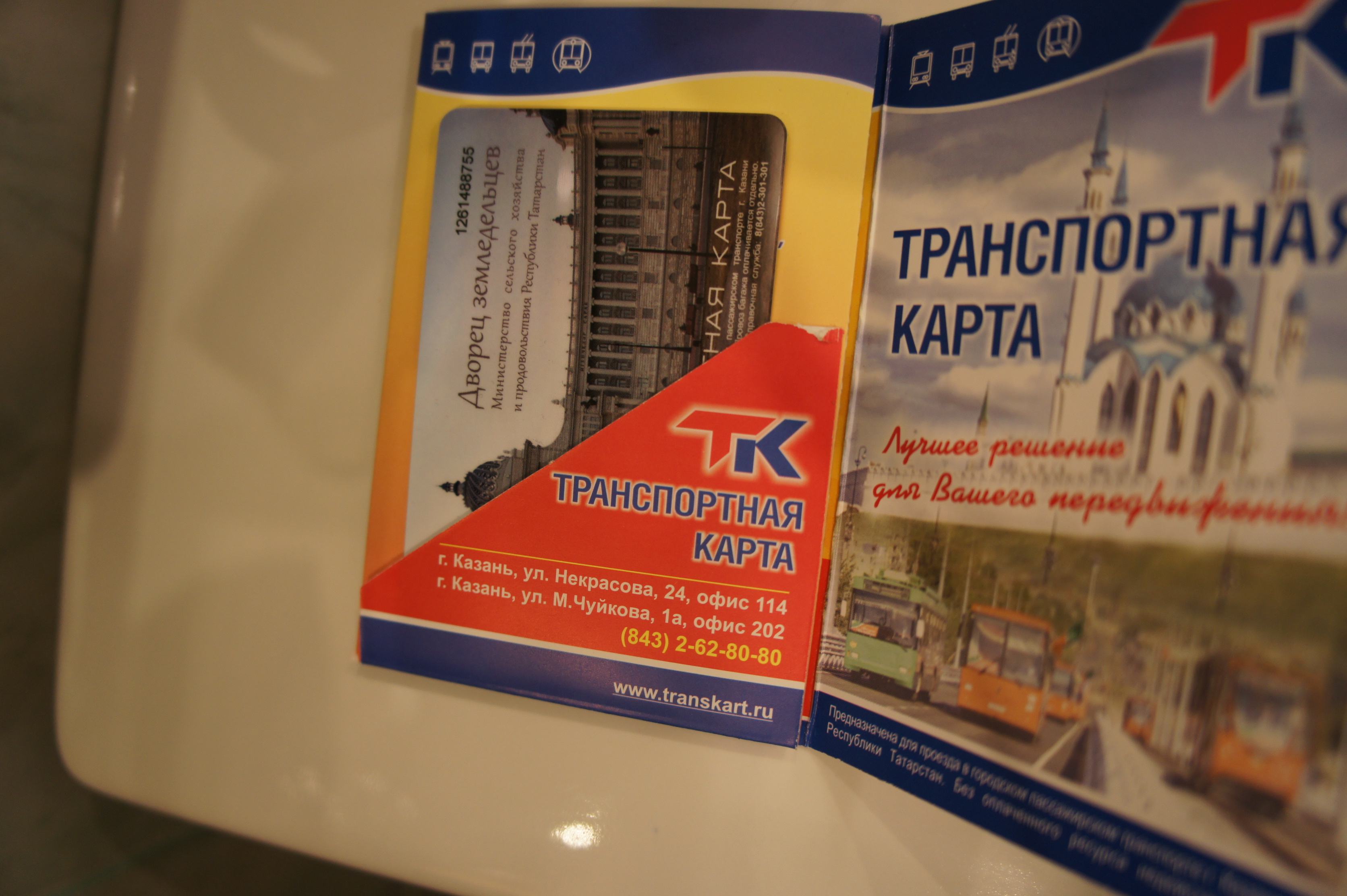 When you open the inside, the card is sandwiched。It seems that you can use this card not only on the subway but also on the trolleybus。You can charge it、Even if it is used up, you can use it as many times as you like by charging it at the ticket vending machine.。Same as Suica。 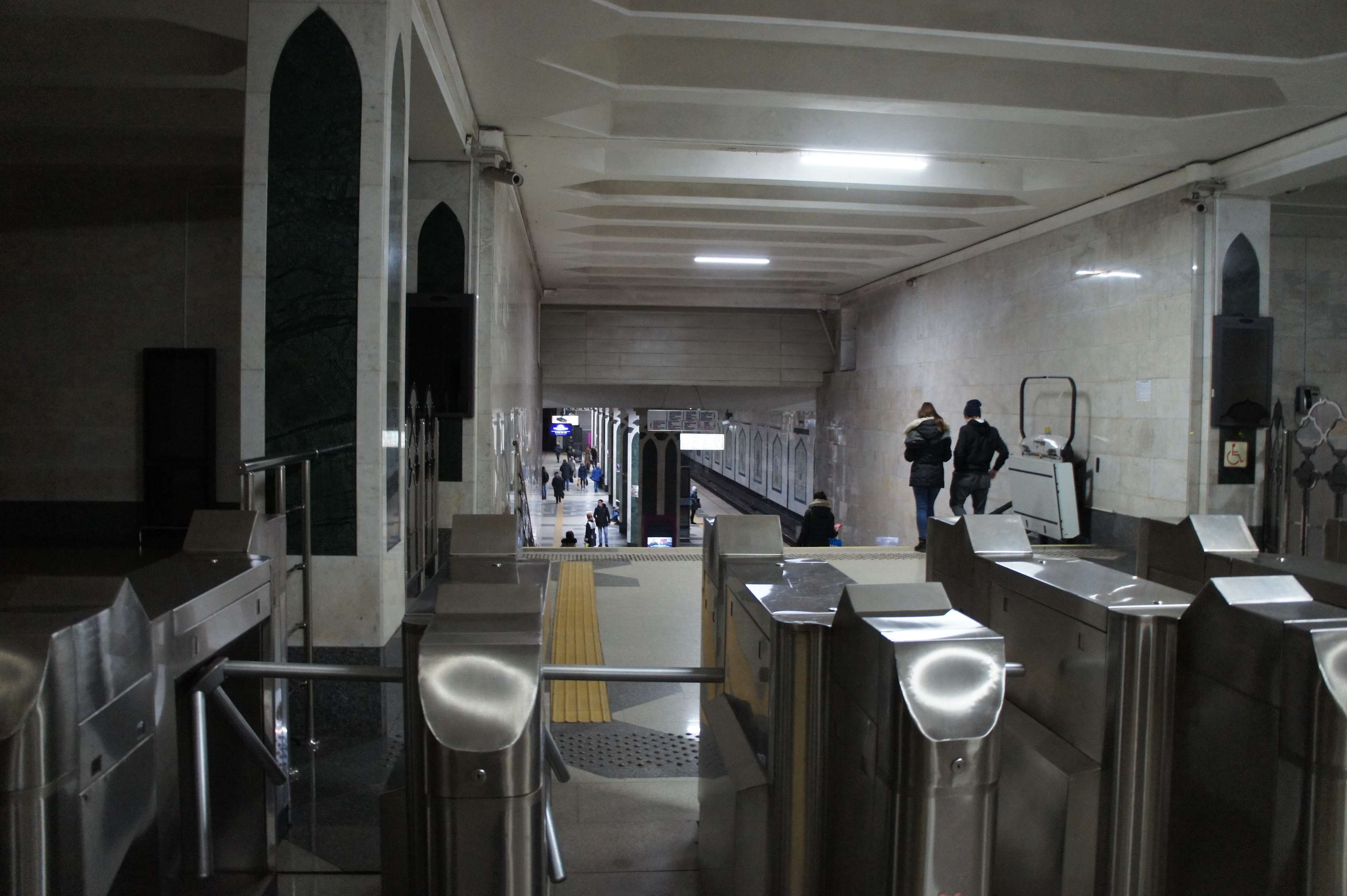 Once you get the ticket, go through the ticket gate to the subway。15The train comes every minute、It's faster to walk if it's about 1 station。Especially since there is no hesitation from the central station to Kremryovskaya station、You should walk unless the weather is very bad。 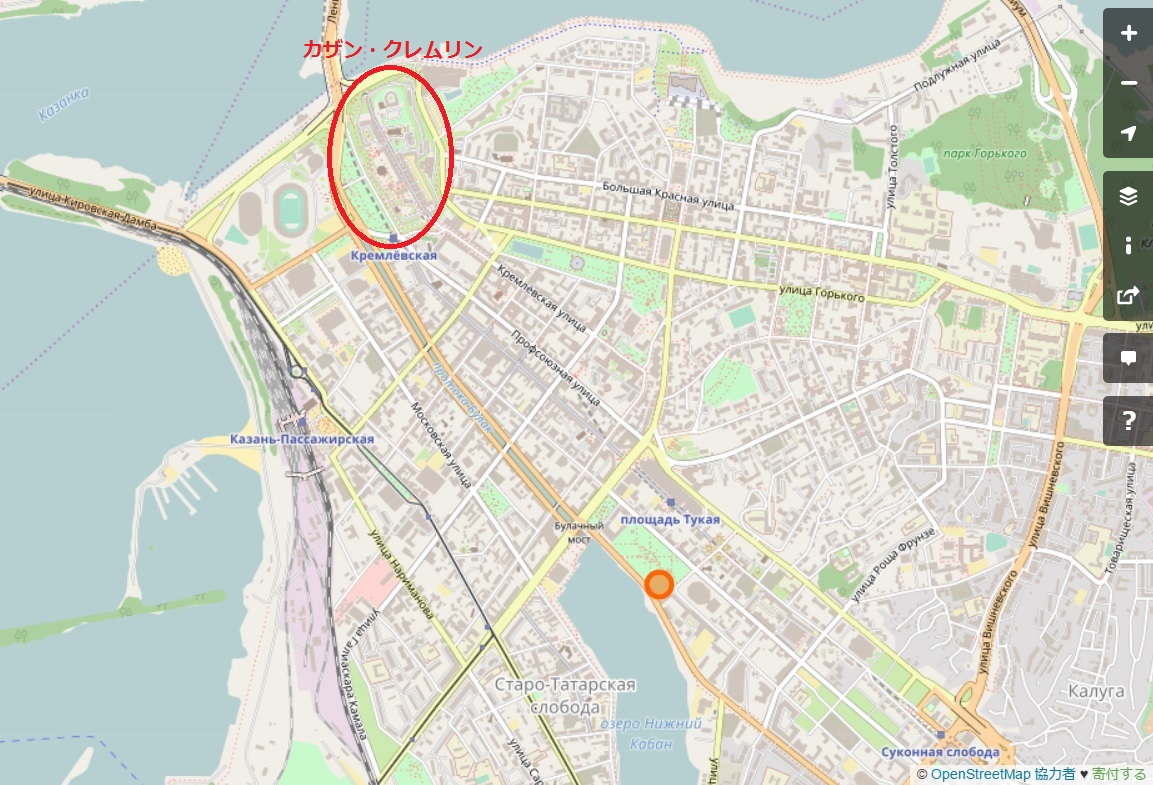 Now、Kazan Kremlin is just at the intersection of the Kazanka and Volga rivers、Located north of downtown Kazan。Just above the map with a red circle。This time I stayed near Sukhonaya Slavada station (Суконная слобода) at the bottom of this map.、It was a distance that I could walk back and forth normally。Well, even if you use a taxi, it's about 150 yen (price is cheap!) 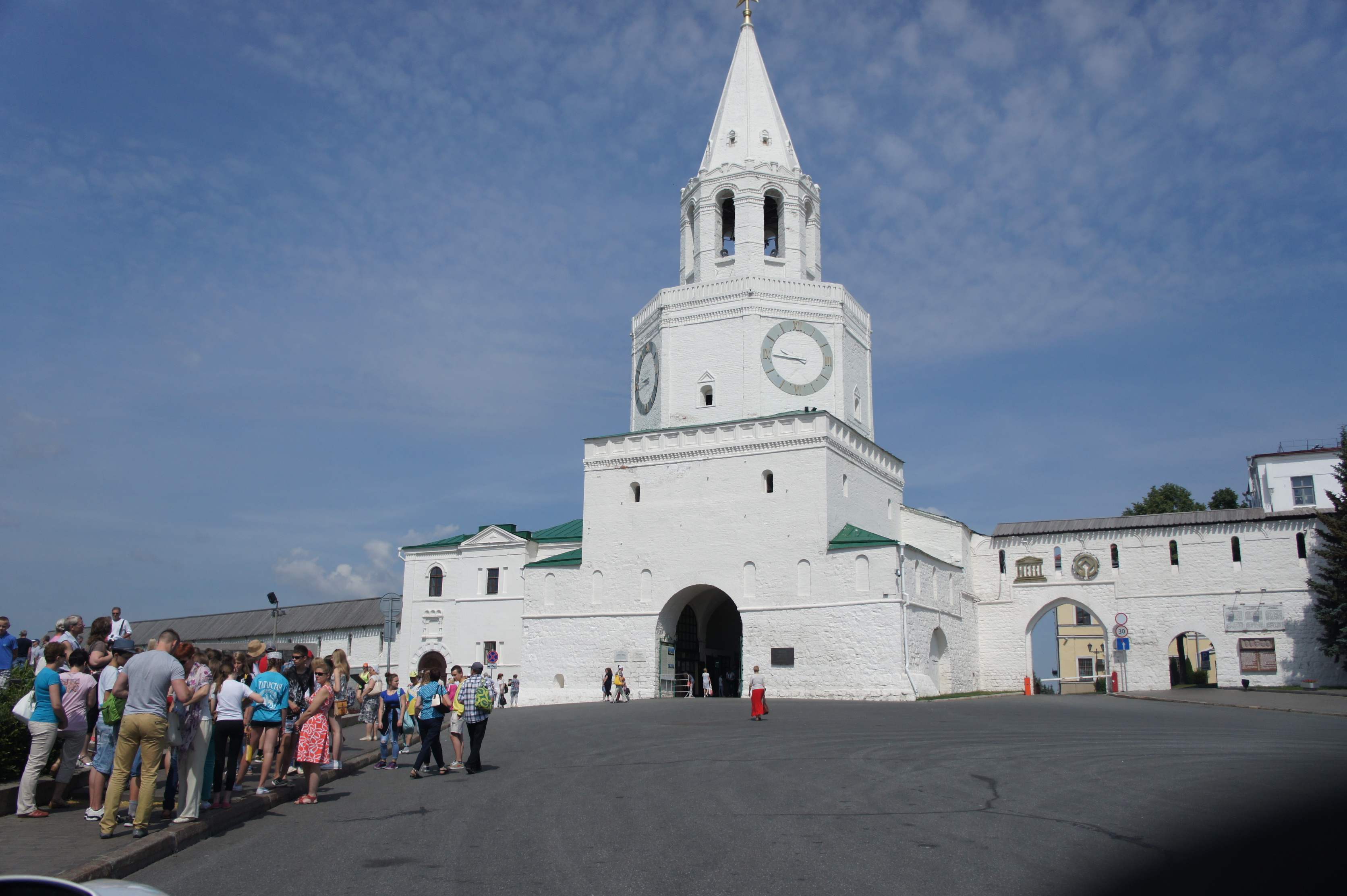 Kazan Kremlin is quite high。The entrance is this pure white building。The crowd is amazing ... As expected, the most famous place in Kazan。I don't know if it's a school trip or an excursion, but there was also a group of students。 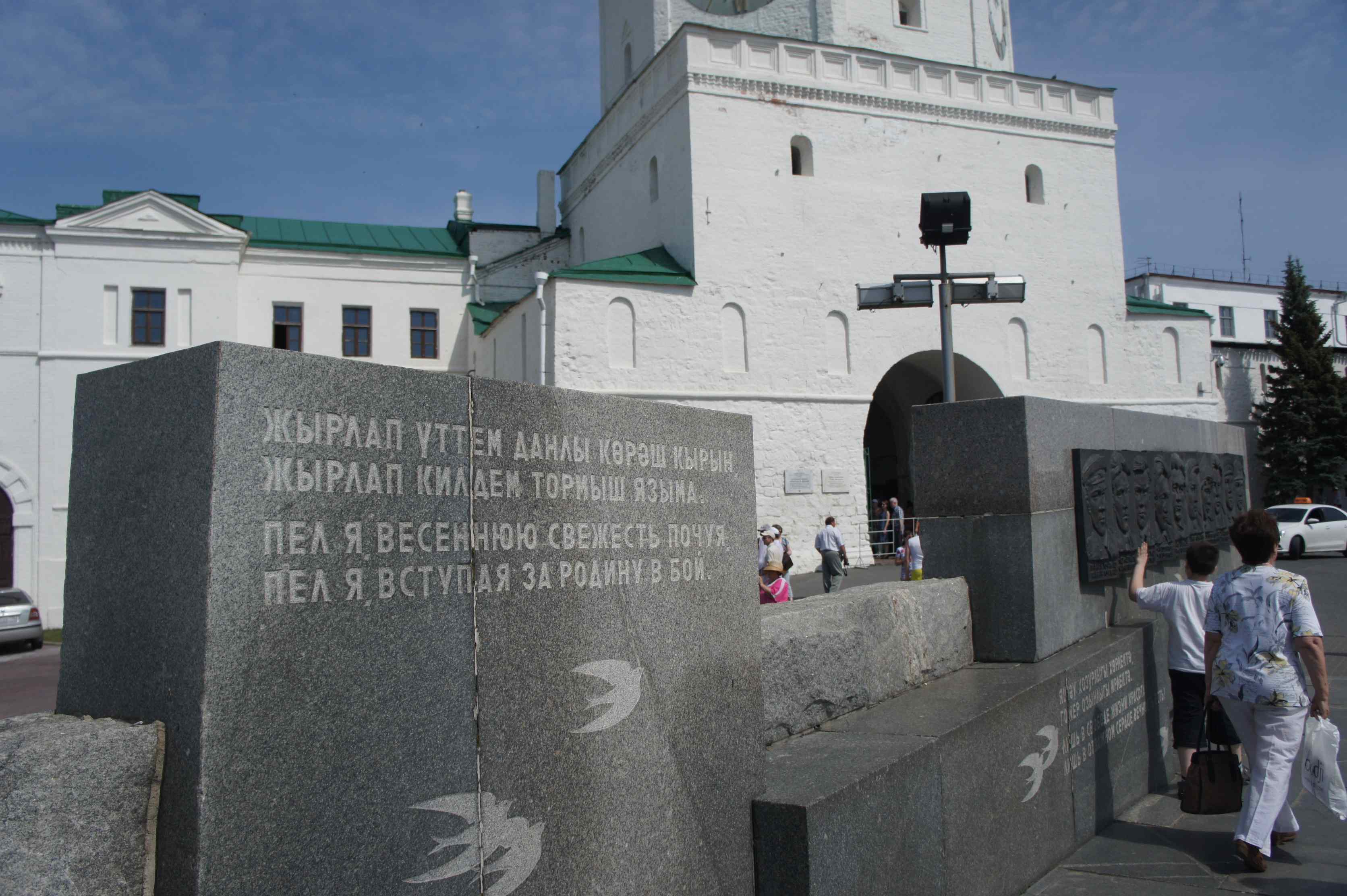 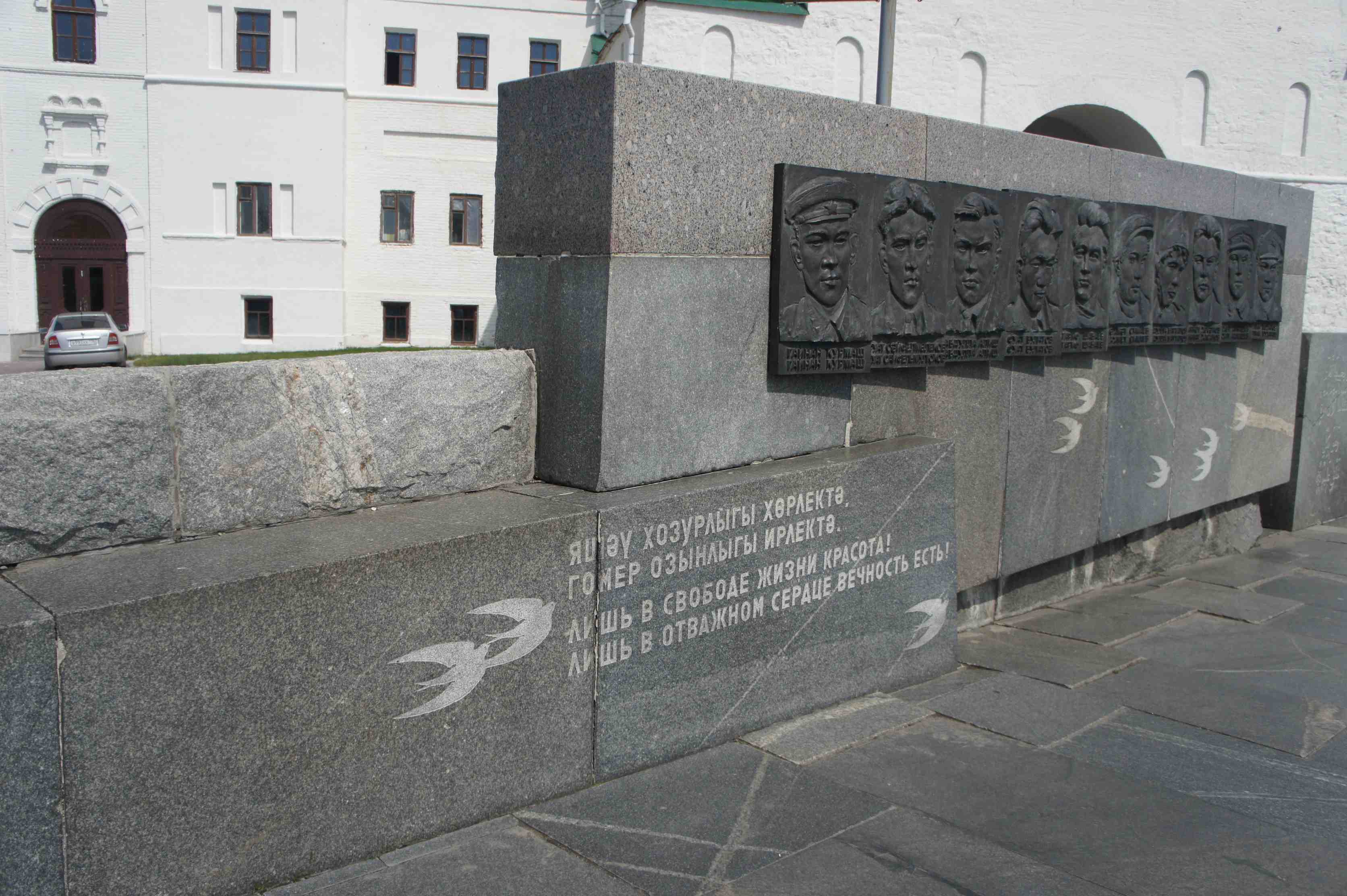 This is also a war-related monument。The content that "courageous life is beautiful"。Are the heroes who were active in the war lined up?。I wonder if there are many monuments about war because there is only a military nation。So did Moscow。 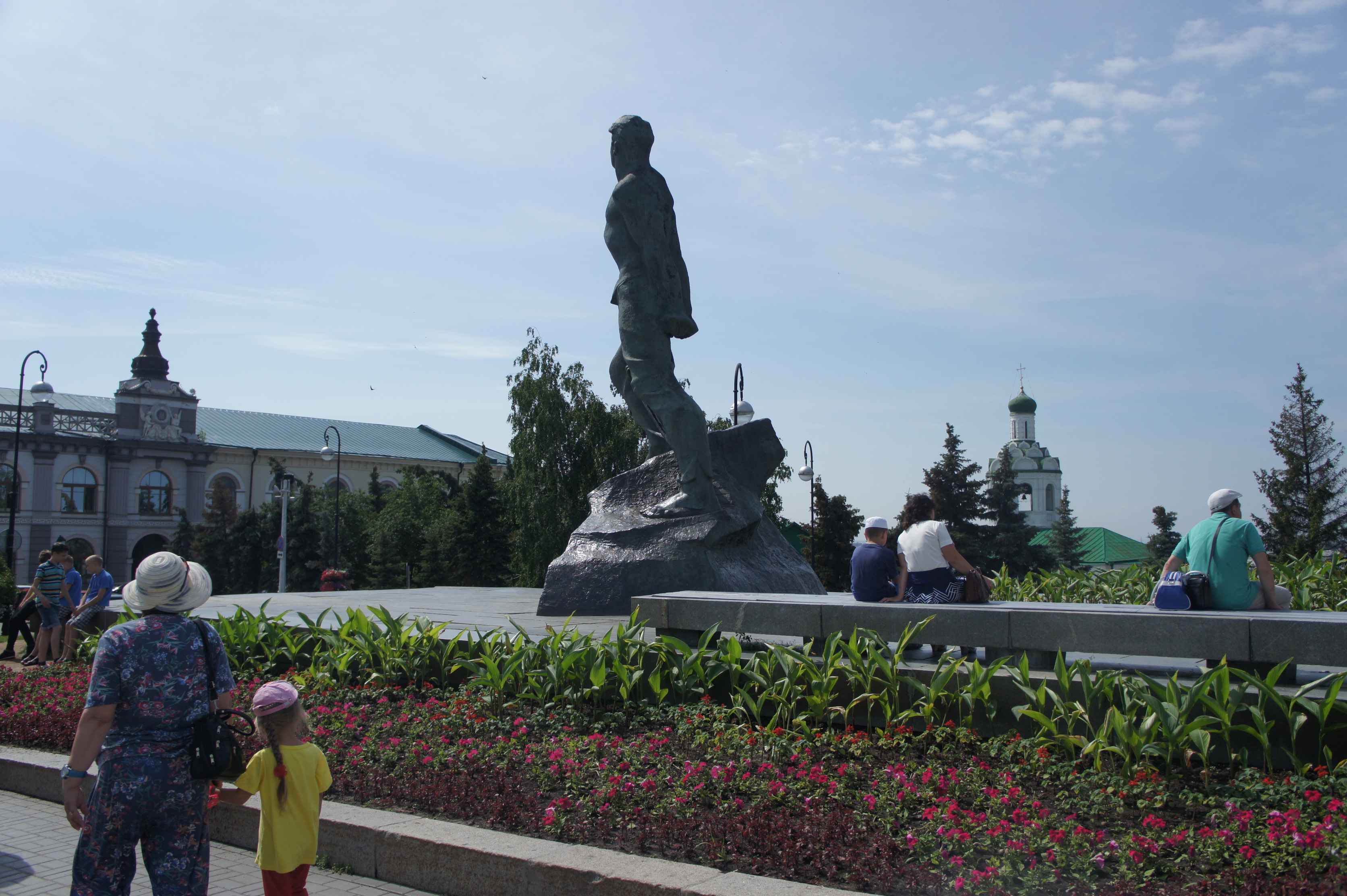 This is a statue of the Tatar poet Musa Dzhalil。In the German-Soviet war of World War II、During the battle against Leningrad, he continued to resist Nazi Germany.、Finally he was taken prisoner and executed in 1944.。The appearance of being restrained shirtless、It expresses the appearance of being a POW、It represents the feelings of Musa Dzhalil who wants to be free。In 1957, 13 years after his death, he won the Lenin Prize as a poet.。 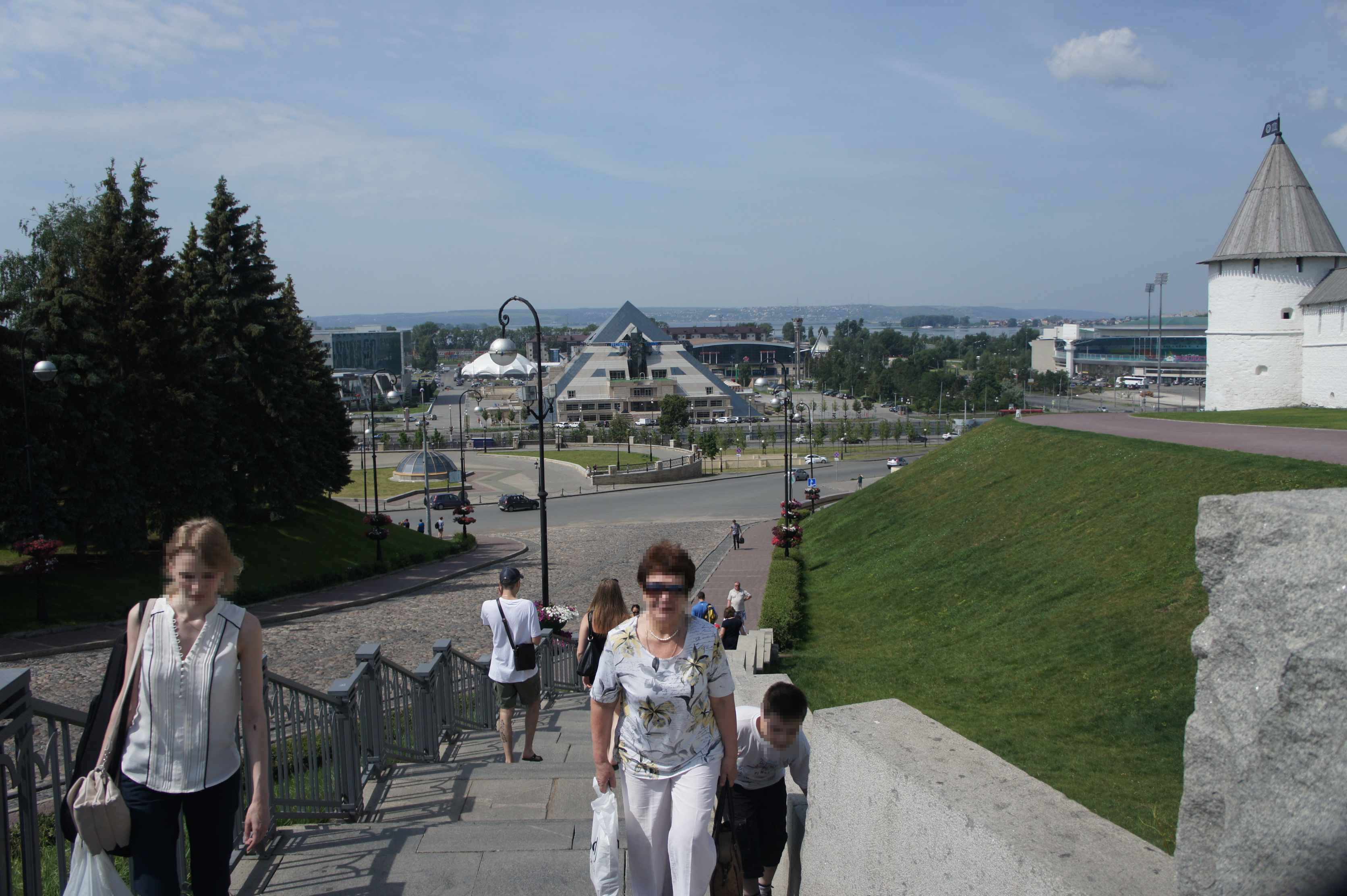 This is the scenery in the direction of the Volga River。The Volga River can be seen in the distance。I think the Volga River is familiar to anyone who has studied geography.。To put it simply, it is also called "Russian Mother River".、In some places it can be as wide as 10 km。The length of this river, which flows into the Caspian Sea from the middle of Moscow and St. Petersburg, is 3,700 At m this is as much as the Mississippi River in the United States。It seems that it is still useful for water transportation。 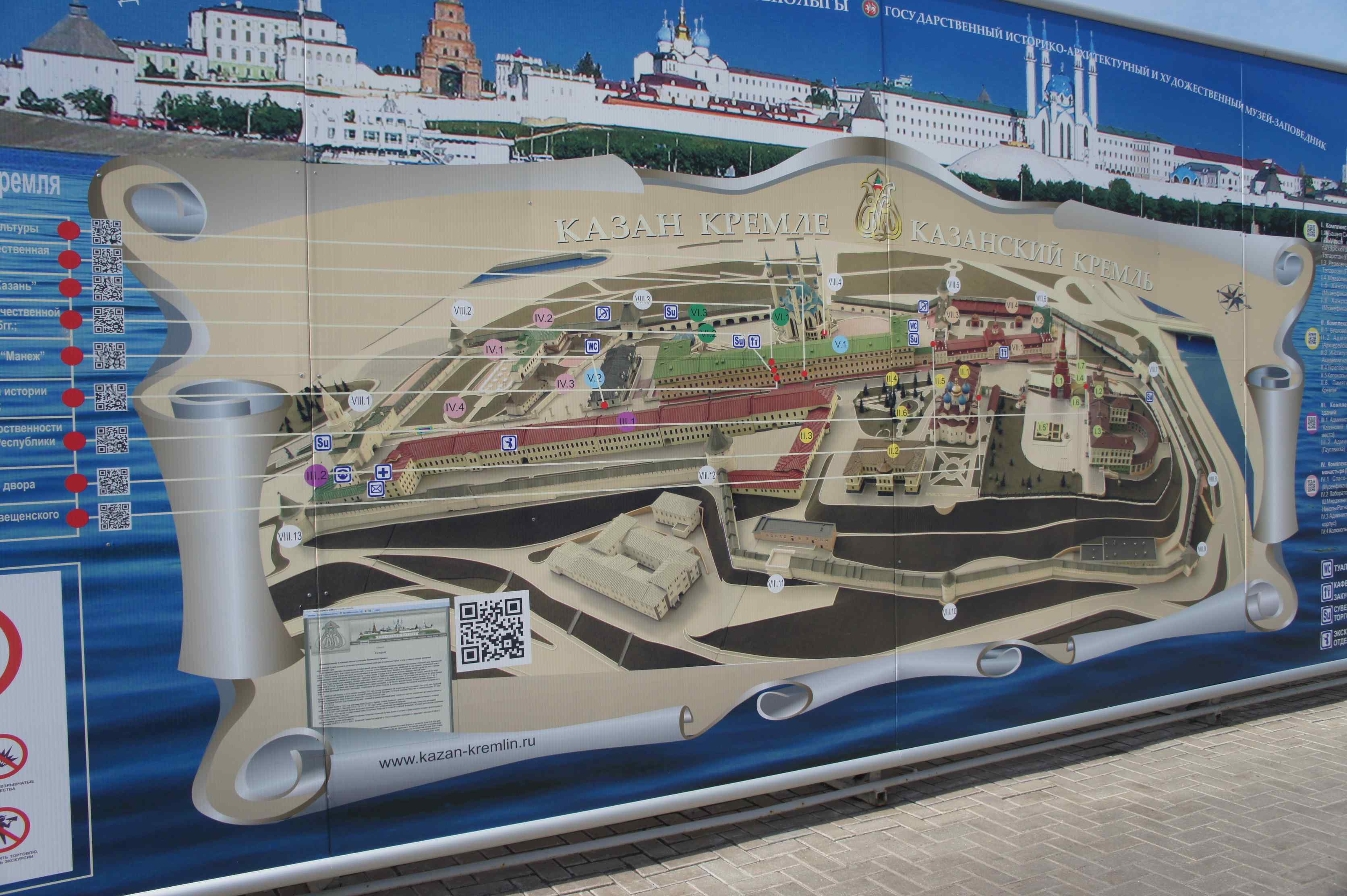 Well, if you go through the entrance, you can enter inside Kazan Kremlin。The first thing you see when you enter is the map on the premises。It ’s a citadel surrounded by walls.。When you look at the map like this, it looks quite wide,、Sightseeing in no time。I don't have time because I can see a lot of beautiful buildings and scenery。 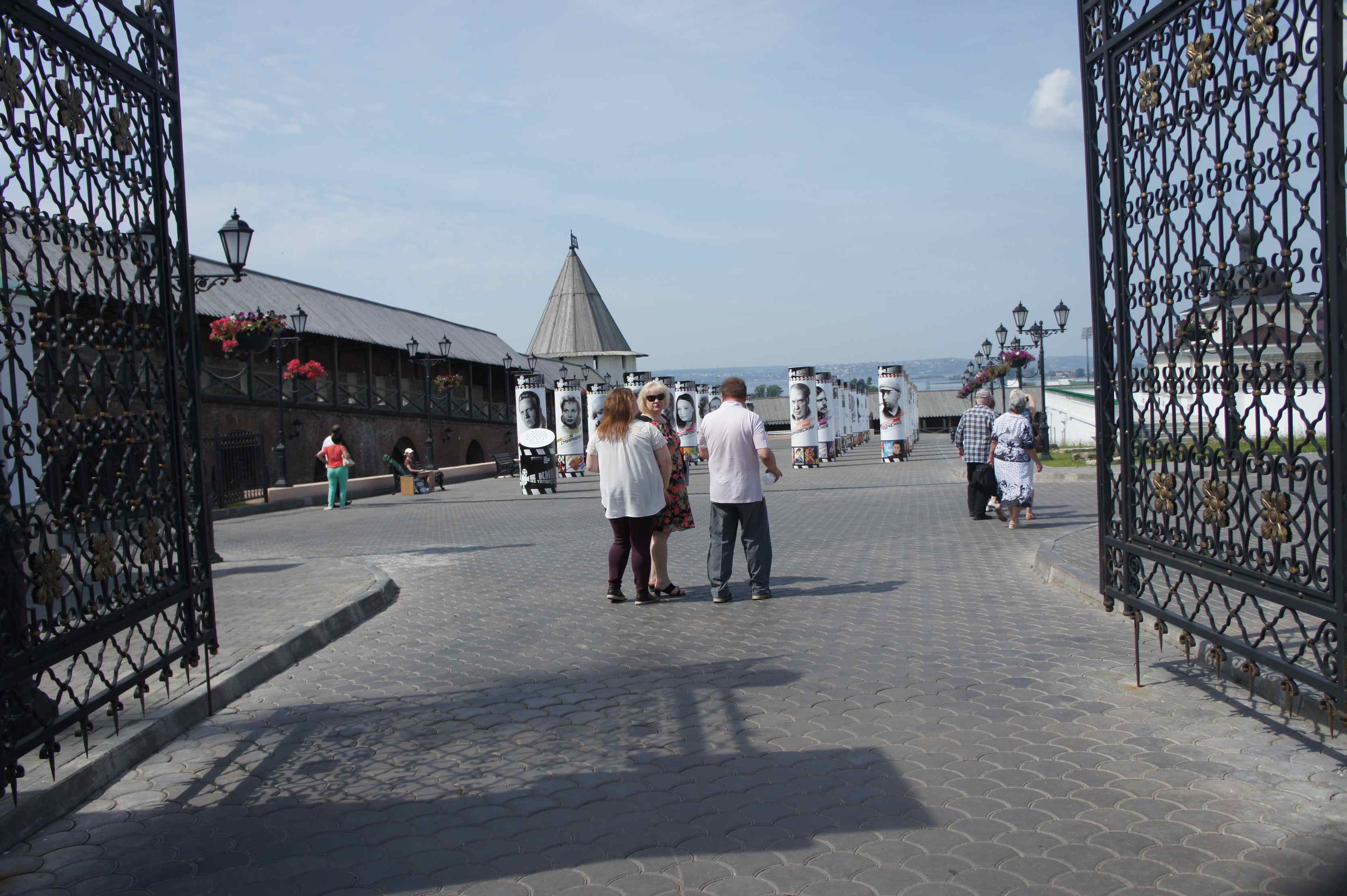 There is a way to go straight after entering the entrance、It ’s a good idea to go clockwise from the left.。Immediately after passing through the main gate, there is a gate like this on the left, so invade。There is a monument with many faces in the back.。

Turn right here and follow the road。There must be a Kremlin in the future ...

A magnificent blue and white mosque suddenly appears。The moment you turn the street, you suddenly see a huge mosque, which is a masterpiece.。I think this impression can only be understood by those who went there.(Lol)。Moreover, the sky is clear and the contrails that are nicely formed are also pictures.。

It seems that this area is a shooting point, and there were many other Lassiyas (← Russians) taking pictures of Pasha Pasha.。 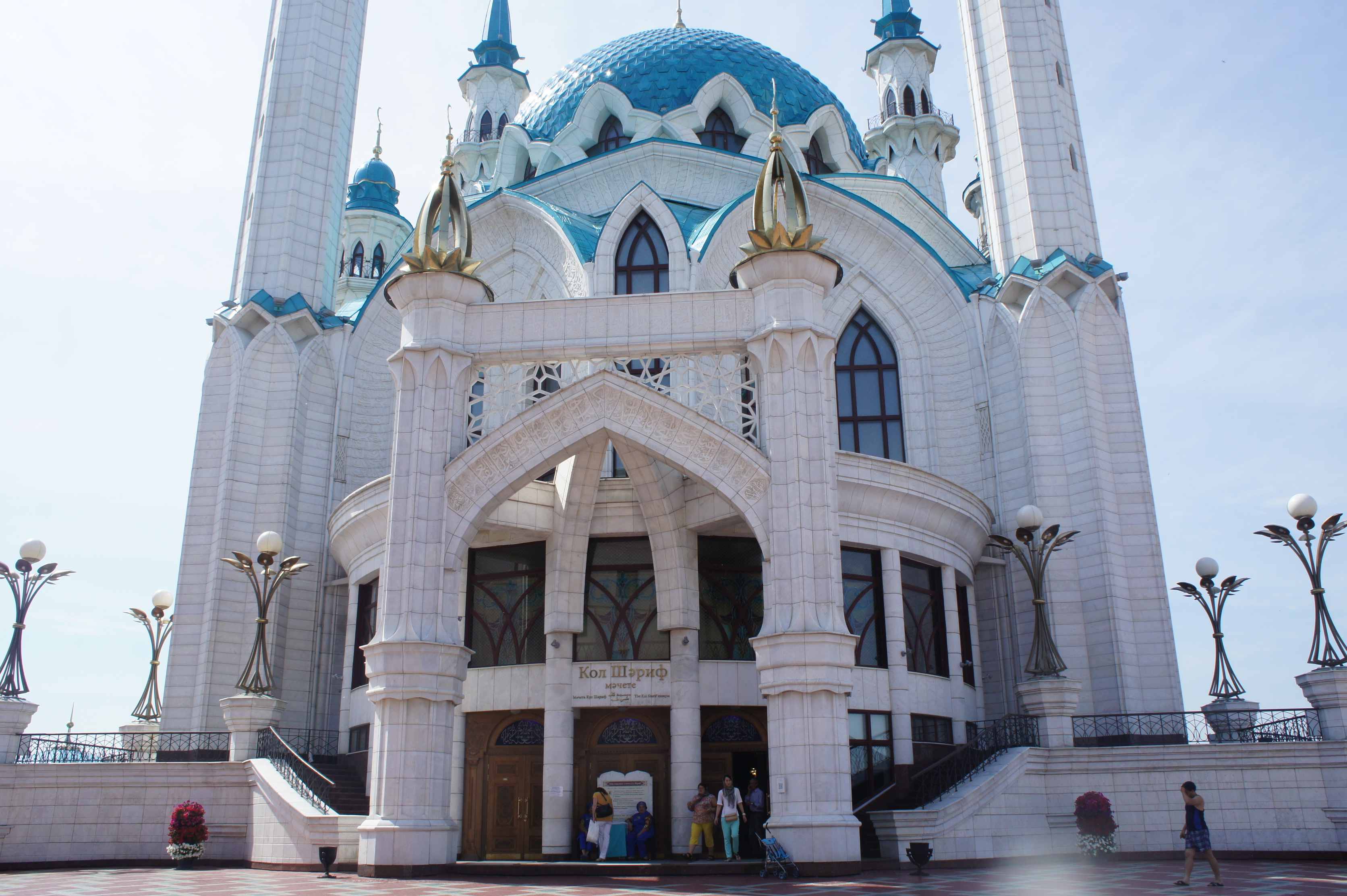 Arrived at the entrance。Entrance is free of charge。But women seem to have to wear a scarf around their heads for religious reasons, so rent a scarf at the entrance.。It was once destroyed by Ivan the Terrible, but is now restored.、It is now a great tourist attraction。I like this cool exterior in summer、It's cold in winter ... I'll post about winter on my blog later.。

It closes late at night, so if you want to get inside, go early。The Kremlin itself is 22:00It's open until around that time。

The article is getting longer, so let's break it here。Next is Kazan Kremlin。Introducing famous spots overlooking the Kazanka River from the Suyumbike Tower。